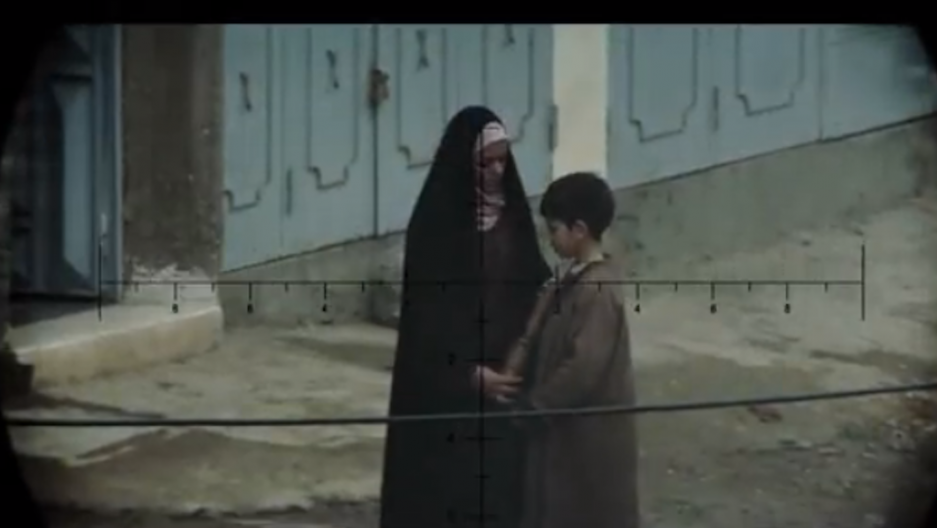 The Oscar-nominated film opens with a scene in which sniper Chris Kyle targets an Iraqi woman and child.
Credit: Screengrab from the American Sniper official trailer
Share

When Gaith Mohammed, a young man in his twenties with a degree in accounting, went to see "American Sniper" during its opening week at Baghdad’s Mansour Mall, he says the theater was full and rowdy.

“Some people watching were just concentrating, but others were screaming ‘F*ck, shoot him! He has an IED, don’t wait for permission!!’” Mohammed laughed, recounting the film’s many tense scenes when US Navy SEAL sniper Chris Kyle, played by Bradley Cooper, radios in for authorization to take out a potential threat in his crosshairs.

The film, set during the US-led occupation of Iraq and released on Christmas Day, hit nerves in the United States immediately. Some critics and commentators lauded it as patriotic and unflinching; others dismissed it as reductionist and racist.

Many people also objected to the film's portrayal of Kyle — a man who described Iraqis as "savages" in his memoir — as a hero.

More from GlobalPost: CSI Baghdad — Meet the small forensics team struggling to deal with a new wave of violence in Iraq

Directed by Clint Eastwood, the movie is based on a book by the late Kyle, now known ubiquitously as the most lethal sniper in US military history. It has proven to be a blockbuster, breaking records and topping box office sales since its wide release on Jan. 16 and racking up Oscar nominations, including one for best picture.

It’s been stirring controversy in Iraq, too.

In Baghdad, where much of the film is set, the movie drew full crowds at one of the city’s new upscale cinemas. Dressed in a fur-collared coat and loafers, Mohammed says many of the showings were sold out, and he knows of people who had to book their tickets a day in advance during opening week.

But after just a week on screens, the Mansour Mall theater pulled the controversial war movie. A theater employee sitting at the box office says management made the decision “because the hero of this film boasts of killing more than 160 Muslims.”  The employee declined to give his name because he did not have permission to speak to journalists.

Mansour Mall attracts a largely upscale crowd in Baghdad. Behind tall gates and multiple layers of security complete with metal detectors and X-ray belts, the theaters here show a mix of Western and Arab films. Moviegoers interviewed at the mall say big budget action movies are usually the most popular, but romantic comedies and family dramas also do well.

Mohammed says one of the film’s opening scenes, when Kyle spots a woman and child who appear to be preparing to attack US troops during the initial invasion of Iraq, had the entire audience on the edge of their seats.

“When the sniper was hesitating to shoot [the child holding the RPG] everyone was yelling ‘Just shoot him!’” he said.

It's the same scene featured in the official trailer for the film:

Mohammed, who lived through the events in Baghdad the film depicts, admits that scenes where women and children were killed were hard for him to watch. But all in all he liked the movie.

“I love watching war movies because especially now they give me the strength to face ISIS,” he said, using one of the acronyms for the Islamic State. When asked if he thought the movie was racist or anti-Arab — a charge made by some critics in the West — he replied, “No, why? The sniper was killing terrorists, the only thing that bothered me was when he said he didn’t know anything about the Quran!”

More from GlobalPost: A comprehensive 54-step guide to how the US ruined Iraq

But not all Iraqis were cheering on "Chief" Kyle’s kills. Wael, a government ministry employee in his thirties, says the film was too violent. He’s happy it’s no longer being shown in some Baghdad theaters.

“To some extent, I considered it against all Muslims,” he said. He also referred to the opening scene in Fallujah where a woman and child are killed.

“The sniper, he has a chance to hit the child and his mother in their foot or anywhere without killing them, but he didn’t because he’s bloodthirsty like all the American troops.”

Wael, who asked to only be referred to by his first name because he fears for his security, says he still watched the movie three times: twice at the cinema and again at his friend’s house.

Iraqi filmmaker Mohamed Al-Daradji says he sees the mixed feeling Iraqis have toward war movies in the reception of his own films, including “Son of Babylon,” which showed at Sundance in 2010 and told the story of a young boy and his grandmother searching for his father who never returned from the 1991 Gulf war.

Daradji says even his own family sometimes complains about the subject mater of the movies he makes. “They say, we’ve had enough of war and wartime, can you not make any love stories?”

But Daradji says audiences respond emotionally to war movies because conflict plays such a big part in day to day Iraqi life. In just the last week bombings in the Iraqi capital have killed more than 20 people, including at least 13 dead in a single day.

“When Iraqis see a film [about war] they’ll be engaged in it because they feel part of them is there.”

Daradji hasn’t seen "American Sniper" yet, but he says he isn’t surprised that the movie is being criticized for inaccurately depicting Iraq.

“There is no American films [about Iraq] — and I saw a lot of them — that have given justice to the Iraqi people and the events that happened in Iraq,” he said. “I sort of understand why not, because when an American filmmaker and an American company make a film they think about it from the American point of view, they don’t care about Iraq, they care about themselves.”

“That’s why we Iraqi filmmakers have to make films about Iraqi people,” he added.

The Iraqi film scene is small compared to its Middle Eastern neighbors, but it’s growing. Daradji and his brother run the Iraqi Independent Film Center, a production house aimed at training the next generation in Iraqi filmmaking and bringing filmmakers who fled under Saddam Hussein's rule back to Iraq.

At the Mansour Mall foodcourt outside the theater, Omar Jalal, a university student, says he’s upset "American Sniper" is no longer being shown.

Even though he saw it on the big screen already, Jalal says he was hoping to bring his family back to see the movie again. Instead, they’ll just watch it at home, he says, holding up a pirated DVD in a thin plastic sleeve that he bought from a shop a few doors down. Most of his other friends have already downloaded it illegally.

Jalal says the movie doesn’t strike him as racist or anti-Arab. He says he finds the main character appealing regardless of the fact that he’s an American soldier killing Iraqis during the US-led occupation of his home country.

“He was a hero and he went through difficult training,” Jalal explained, saying Chris Kyle was just serving his country, a universal duty for all men. “Besides,” he shrugged, “it’s just a movie, and I like war movies. If they are true or not, whatever!”

This story was reported by Susannah George in Beirut and a journalist in Baghdad.