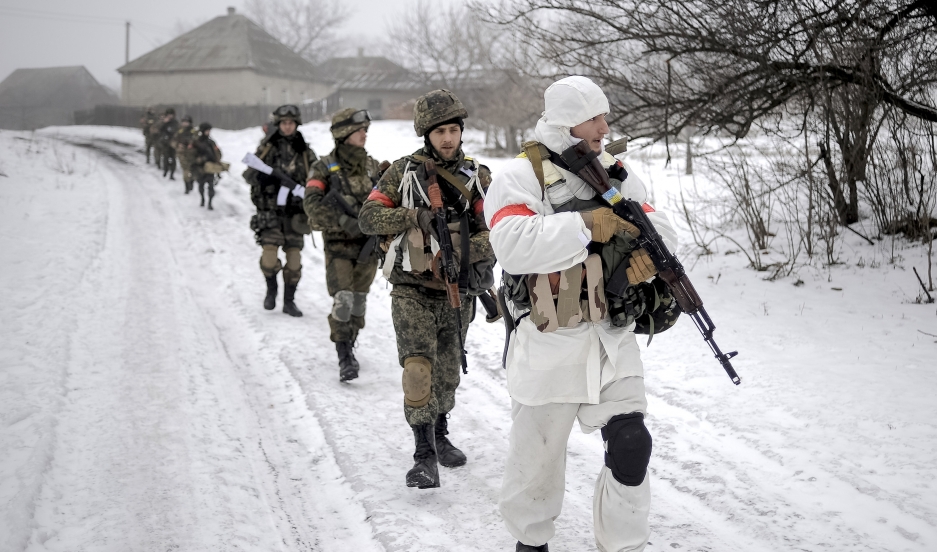 Ukrainian servicemen patrol a village in the Luhansk region of eastern Ukraine amid warnings that the conflict with Russian-backed separatists is escalating.

After several months of relative calm, NATO has accused pro-Russian separatists of once again escalating the fighting in eastern Ukraine, where at least 5,000 people have died since the conflict began early last year.

Over the weekend, separatists shelled the city of Mariupol. At least 30 people died, and according to US ambassador to the UN Samantha Power, the Russians were behind the operation.

"This offensive is made in Moscow. It is waged by Russian-trained and Russian-funded separatists, who use Russian missiles and Russian tanks, who are backed up by Russian troops, and whose operations receive direct Russian assistance," she told the U.N. Security Council.

On Wednesday, Treasury Secretary Jack Lew is on the ground in Ukraine, promising more aid for state troops, in addition to the $1 billion guarantee President Obama promised last June.

But Lt. Gen. Ben Hodges, commander of the US Armed Forces in Europe, says that Russian President Vladimir Putin has ambitions to redraw the map and is intent on creating a new rift in Europe.

“I believe President Putin has two goals,” says Hodges. “The first one, [is] moving boundaries and borders of European countries.”

Pointing to the annexation of Crimea and the happenings in Mariupol, Hodges says that Moscow is trying to expand the borders of Russia.

“That’s the first goal,” he says. “The second is to fracture our great alliance with the North Atlantic Treaty Organization or NATO, and to further separate North America from continental Europe. He obviously feels threatened from by the economic power of the EU and the solidarity of our alliance [with NATO].”

Hodges says that Western actors are greatly concerned that Russian forces would shoot rockets into Mariupol, a city of 500,000 situated on the Black Sea coast.

“This city is important, not only because of its population and the fact that it is a seaport, but because it is in the way if Russia [wants to] establish a land bridge that goes from Russian territory all the way to Crimea,” he says. “They now have over 25,000 soldiers and a significant amount of air artillery and other capabilities [in Crimea] so they would like to have that land bridge.”

The UN has declared the Mariupol shelling a war crime, but Hodges says that he doesn’t feel like the US or EU is at war with Russia—at least not yet.

“Nobody wants to have a war with Russia,” he says. “The last thing we want is a Russian economy that’s wrecked — that would have a significant impact on Europe and the United States. That’s not what we’re after, but it’s clearly a dangerous situation.”

However, Hodges says that he saw the full force of Russian aggression when he was in Kiev last week to visit with Ukrainian military officials and wounded soldiers.

“It is very clear that the amount of equipment and ammunition that Russians are providing to their proxies, the so-called separatists, is significant,” he says. “In fact, it’s actually doubled since the Minsk agreement was signed back in September.”

Since September, Hodges says that an average of about 30 people a day have been killed in the fighting between Ukrainians and pro-Russian separatists.

“I was able to talk to some Ukrainian officers,” he says. “They’ve seen some flame-throwing type weapons that they haven’t encountered before. These are the kind of things that a militia does not possess — you can’t assemble this in the basement of your home. It’s obvious that professional, high-quality ammunition and equipment is being provided.”