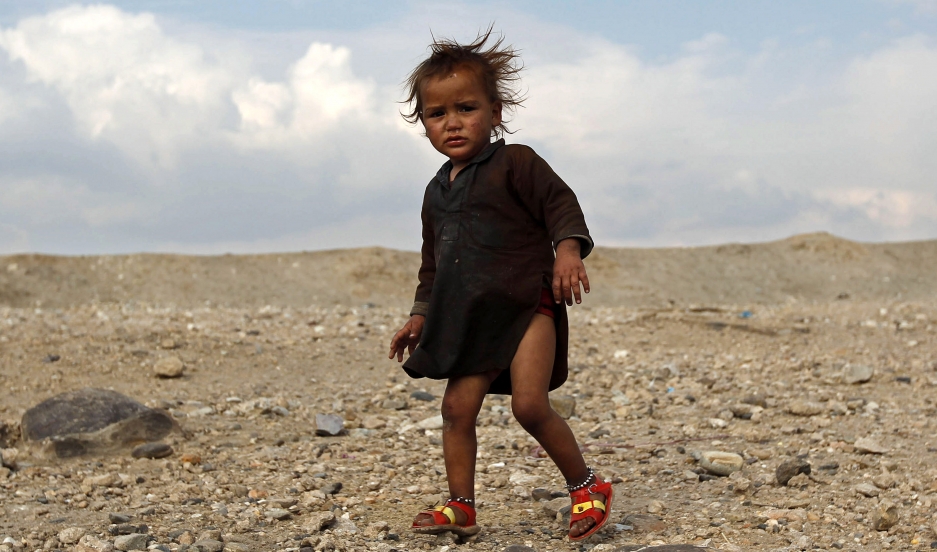 An internally displaced Afghan child stands outside a shelter outside Jalalabad, Afghanistan.

“You heard stories like, my cousin was riding his bicycle on a dirt path and he passed a soldier and the soldier demanded his bicycle. And when the kid wouldn’t give up the bicycle, he shot him.”

After the fall of the Taliban, Afghanistan lacked a well-organized, national police force, Chayes explains. That's when corruption began to flourish. “Local governors basically had their own militias,” she says.

Then, over time, the system crystallized. She says ordinary Afghans had to fork over money for everything from driving past a police checkpoint to obtaining a death certificate for “a father who was blown up in a suicide bombing.”

“The extortion was perpetrated in a way that was just incredibly humiliating and offensive to people,” Chayes says. “I could watch people getting more and more indignant.”

The corruption was helping drive local Afghans to join the Taliban. The US was seen as the patron of a corrupt Afghan government. “People would become less resistant to Taliban inroads,” explains Chayes.

Chayes, who also worked as an adviser to the US Joint Chiefs of Staff, told officials it was necessary to take the short-term risk of making enemies within the government to prevent the long-term effects of not doing anything.

“As I was grappling with this issue in conversations with US decision-makers, I realized that there was a tendency to see corruption as a kind of sideshow,” Chayes says, “as an unfortunate failing of a government or the work of a number of venal individuals.”

Her latest book, Thieves of State: Why Corruption Threatens Global Security, goes beyond Afghanistan, arguing that corruption breeds extremism everywhere from Afghanistan to Nigeria and Uzbekistan.

“These are governments actually structured around the objective of extracting resources for personal gain,” she says. “They are vertically-integrated, criminal organizations bent on stealing money for private gain, that are masquerading as governments and using the tools of state power to further those ends."

In Nigeria, Christian religious fundamentalists are reacting strongly against the corruption, Chayes says. "There is a very powerful and very strict Pentecostal movement among Nigerian Christians and they haven't quite said, 'Go attack the government,' or 'go attack the police,' or 'go attack Muslims,' but the amount of violence that I experienced in Sunday services that I attended was quite frightening."

"It's about 'the enemy has thwarted my destiny,' and people would jump up and shake their fists and the violence [was] in the air, the powerful negative emotions that were being evoked and expressed. And we're talking big churches here. We're talking a couple thousand people," she notes. "It was impressive."

Chayes works at the Carnegie Endowment for International Peace and lays out policy recommendations in her book. But the first step, she says, is for the US to study this problem, one that’s as old as governance itself.

This story is based on an interview that aired on PRI's To The Point.  Joyce Hackel of PRI's The World also contributed to this report.