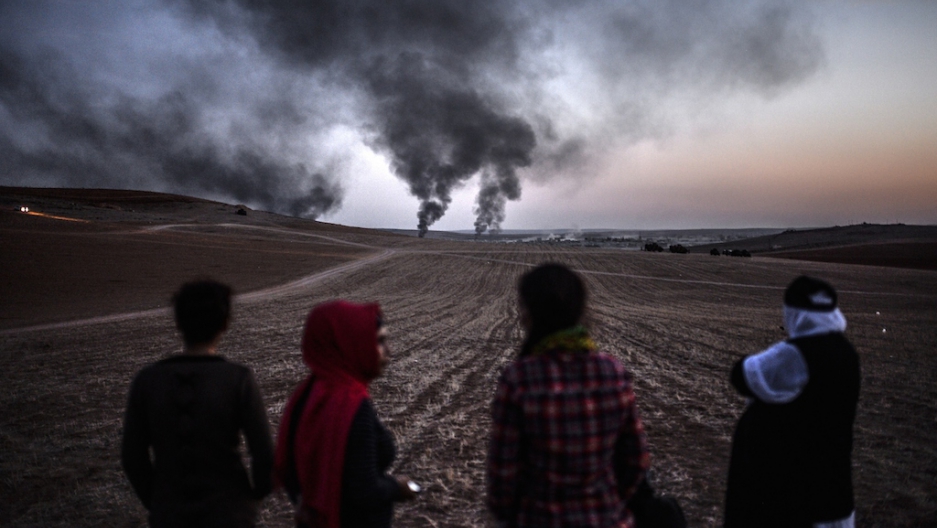 People watch as smokes rises from the town of Kobane, also known as Ain al-Arab, on October 26, 2014, at the Turkish border near the southeastern village of Mursitpinar, Sanliurfa province.
Credit: Bulent Kilic
Share

The group’s fighters had just swept through large parts of north-western Iraq, sending the ill-prepared and ill-motivated Iraqi army fleeing and capturing many heavy weapons in the process.

Rather than focusing their might on a push eastwards in Iraq, towards Baghdad, they brought a great deal of those weapons to Syria, to the edge of the Kurdish area of control around Kobani.

The siege that followed would develop into one of the most closely followed battles of the Syrian war.

Despite its small size, the fight for the city, home to some 45,000 before the fighting began, would take on symbolic significance and become a crucial test for the US strategy to push back the Islamic State.

After facing the prospect of the city falling on more than one occasion, the Kurds declared victory in Kobani on Tuesday, claiming to have pushed IS out of the city and sent them on the run in the surrounding area.

So how did it happen? How was the Islamic State’s seemingly unstoppable advance halted in this nondescript town?

The island of Kobani

One only has to take a quick look at a map to see why Kobani was an attractive target. It is relatively small and stands apart from the other Kurdish areas of Syria — an island in a sea of IS control.

The border with Turkey lies immediately to the north, close enough so that when fighting was raging throughout the previous months, television cameras could capture every explosion and boom of artillery fire from a hill of the Turkish side. More on that later.

The capture of Kobani would have provided a number of strategic benefits for IS. It would have given the group control of another yet key border crossing, cementing its control of a long stretch of the border from Jarabulus in the west to to Tal Abyad to the east. Controlling that stretch would have made it easier to bring fighters into Syria from Turkey and severely disrupted the ability of Kurds to fight back across north-eastern Syria.

The Islamic State’s offensive was launched in early July. The villages of Zor Mughar, Beyadi and Ziyarete — to the west of Kobani — were the first to fall. By September, the group went on to capture 300 villages surrounding the city limits before pushing on to control around half of the city itself.

The situation looked bleak. Tens of thousands of refugees spilled over the border into Turkey, abandoning their cars when the roads became clogged. The poorly-armed fighters of the People’s Protection Units (YPG) — the main Kurdish militia in Syria — and the city’s remaining residents were all that stood in the way of an emboldened IS, who were yet to suffer a major defeat in their most recent expansion.

Kobani could have easily suffered the same fate as so many other, larger towns that the Islamic State had overrun. But when Kurdish fighters were struggling to defend their ever-shrinking part of the city, a solution came from the clear blue sky.

On September 23, in an effort to stop the advance of the Islamic State in Syria and Iraq, the United State began bombing the group’s positions across the territory it held.

Nowhere was the force of that campaign felt more than in Kobani. The city and its surroundings were the target of around half a dozen airstrikes every day, according to the Associated Press. More than 700 airstrikes rained down on the area, constituting 80 percent of all coalition strikes in Syria.

With the help of air support, and despite some back-and-forth, the defenders of Kobani were able to win back the city, neighborhood by neighborhood.

US Central Command gave a cautious statement on Tuesday, saying that anti-Islamic State forces controlled about 90 percent of Kobani.

The airstrikes were to have a “crucial” impact on the defence of Kobani, according to Alan Semo, a member of the foreign affairs committee of the Democratic Union Party (PYD) — the largest political force in Kurdish Syria and sister organization of the YPG.

“The last week has seen an intensive bombing campaign that has made a big difference,” he told GlobalPost on Tuesday.

A picture taken on January 26, 2015 in Sanliufra shows smoke billowing from the Syrian town Kobani.

Another factor that contributed to the success of the Kurds was the close coordination between the coalition and fighters on the ground — a first, and something could prove an effective model to be replicated elsewhere.

But although the coalition played an important role in supporting the fighters on the ground, ask any of them who the victory belongs to and they will likely answer “the Kurdish people.”

There is some truth to that. The battle in Kobani, and in other Kurdish areas threatened by the Islamic State, has heralded a period of Kurdish cooperation unseen in recent history.

In Kobani, as well as in Sinjar and Shingal in Iraq, something akin to a national mobilization occurred, bringing together Kurdish fighters of different nationalities and political stripes.

In all those towns, once overrun by IS, Peshmerga fighters from the semi-autonomous Iraqi Kurdistan fought alongside guerillas from the Kurdistan Workers’ Party (PKK) — a militant group that fights for Kurdish autonomy in Turkey.

Speaking to GlobalPost in December, the military chief of the PKK, Cemil Bayik, said that the IS offensive had backfired in that sense.

“ISIL is a great threat to the Kurds, but ISIL at the same time, unwillingly, served to unite us. Because despite our internal differences, the threat has brought together Kurds from all parts,” he said.

It’s easy to see why Kobani became a rallying point for the Kurds. But the same is true for the US and the Islamic State.

Its close proximity to the border meant that the battle was broadcast into living rooms around the world. When a strategic hill fell to IS, when a neighborhood was lost, the world heard about it. It was because of this, at least in part, that US Secretary of State John Kerry declared it would be "morally very difficult" not to help Kobani.

Both sides quickly recognized the propaganda value of the battle, and both sides poured significant resources into the fight. That has come at a cost.

A Turkish soldier watches journalists at their position on top of a hill overlooking the city of Kobani, near the Mursitpinar border crossing on October 13, 2014 on the Turkish-Syrian border.

More than 1,000 Islamic State fighters are thought to have been killed in the fight for Kobani, according to the London-based Syrian Observatory for Human Rights, which monitors deaths in the Syrian civil war.

In the last days of the battle, activists reported that IS sent inexperienced fighters and teenagers to the frontline due to a shortage of recruits.

Aside from the physical damage to the Islamic State’s ranks, the defeat is likely to have an impact on the group’s morale.

The Islamic State is a group that claims its victories are awarded by God. That was easier to pass off then it swept through Iraq and Syria last year, and worked as a powerful recruitment tool. But now the group’s limits have been revealed.

The defeat in Kobani also comes at a time when IS gains elsewhere are under threat.

Kurdish forces recently broke the IS siege of Mount Sinjar, where hundreds of civilians had fled following a brutal offensive on the towns and villages below.

The Iraqi army is making progress against IS in Diyala province and preparing, along with the Kurdish Peshmerga, to launch an offensive on Mosul this summer.

It would be premature to call Kobani the Kurdish people’s Stalingrad, as some people would have it. Or even Islamic State’s Waterloo. What it is though, is a defeat. And perhaps a model for the anti-IS coalition to provide further defeats.

Kurds perform a tradional dance during a rally on January 26, 2015, in Diyarbakir, southeastern Turkey, following news that Kurdish fighters expelled Islamic State (IS) group militants from the Syrian border town of Kobani.