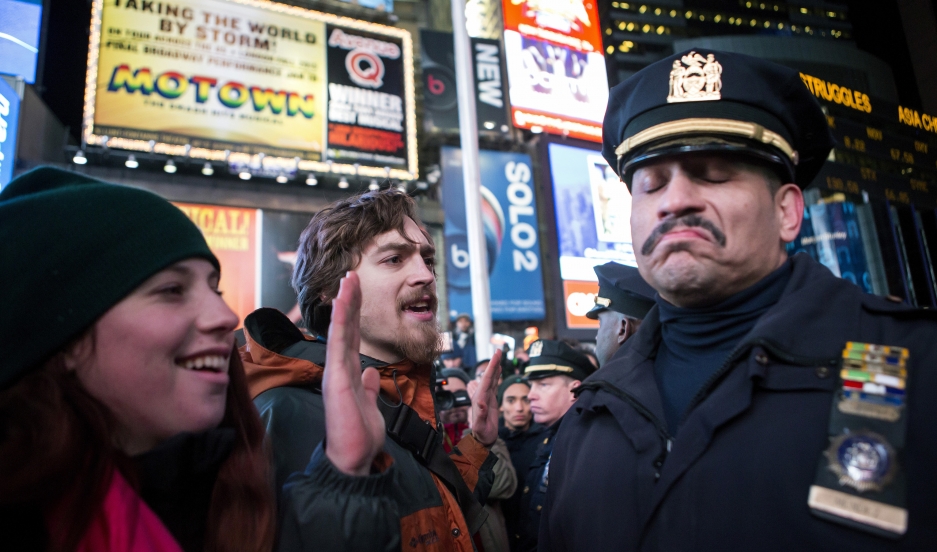 A New York City police officer reacts next to people protesting against the death of Eric Garner during an arrest in July.

The killings of Michael Brown, Eric Garner and Tamir Rice have have focused nationwide attention on police tactics, many of which are shaped by the "broken windows" theory.

Coined in 1982 by two college professors, the "broken windows" theory held that a police force can make communities safer by cracking down on minor crimes — things like broken windows. By pursuing low-level offenses, many argue that police departments can play a powerful role in deterring more serious crimes.

But while crime rates have fallen dramatically since the theory was developed and put into practice, minority communities often feel unfairly targeted by "broken windows" policing — which one of its creators says was always a concern.

“We were fearful of [negative consequences] from the very beginning,” says George Kelling, who developed "broken windows" along with James Wilson. “The history of the use of loitering laws and vagrancy laws is a very sad history. It was used during the post-Civil War period and into the 20th century to keep many African-Americans in virtual slavery. We understood that it had enormous potential for abuse.”

Kelling, now a senior fellow at the Manhattan Institute, a conservative think tank, says the original article that laid out the “broken windows” theory raised issues that many would now refer to as racial profiling. When grappling with questions of justice and equity, the authors wrote, “How do we ensure, in short, that the police do not become the agents of neighborhood bigotry?”

“We were raising these issues out of concern that, as ‘broken windows’ ideas worked their way into policy, that it had to be done with considerable concern for how discretion was used and that it was used appropriately,” Kelling says. “We expected even then that it was a powerful tool, and like many other powerful tools, that it had capacity for abuse and misuse.”

When developing the theory, Kelling says he and Wilson examined research that shows that “disorder and crime are usually inextricably linked.” But while some related research was examined, the “broken windows” theory was not actually based on data. Rather, it was developed out of impressions raised by social scientists.

“We were clear at the beginning that it was speculation,” Kelling says. But he strongly backs the positive results of "broken windows." “I don’t think it’s speculation anymore. Right now, my own feeling is that the burden of proof is no longer on those who advocate ‘broken windows.’ The burden of proof is on those who suggest that it doesn’t have any impact on crime.”

Since the 1980s, crime in the United States has dropped significantly — in 2013, the number of violent crimes dropped to their lowest levels since the 1970s. However, Kelling says that “broken windows” shouldn’t be viewed as a sort of magic bullet for combating crime. And he recognizes that communities of color feel they're taking the brunt of police tactics.

“It’s a sad commentary that it’s come to this, because we’ve made so much progress,” Kelling says. “When I first start to consider how neighborhoods ought to be policed, the first thing I account is victimization — who’s suffering the most? Almost regardless of where you go in the United States, whether you’re talking about New York or Seattle, one finds that it’s the poor and minorities that are suffering from crime and disorder.”

Kelling believes that the “demand for order in minority communities is strong.” He adds, however, that police should be using the “broken windows” model to operate on behalf of citizens.

“For me, ‘broken windows’ has always been a subsumed or is a tactic under community policing,” he says. “Police operate on behalf of citizens. They have to work with citizens.”

Kelling says that the consequences will be great if police departments solely work in the name of getting more arrests or driving crime down.

“Minority communities have a history of two problems with the police, and one is police brutality — that is a serious problem that has to be dealt with,” he says. “But the second is under policing ... My fear is that because of the questions that are being raised now about the overuse of authority, we’re going to under police minority communities again. And that comes at a great, great cost."