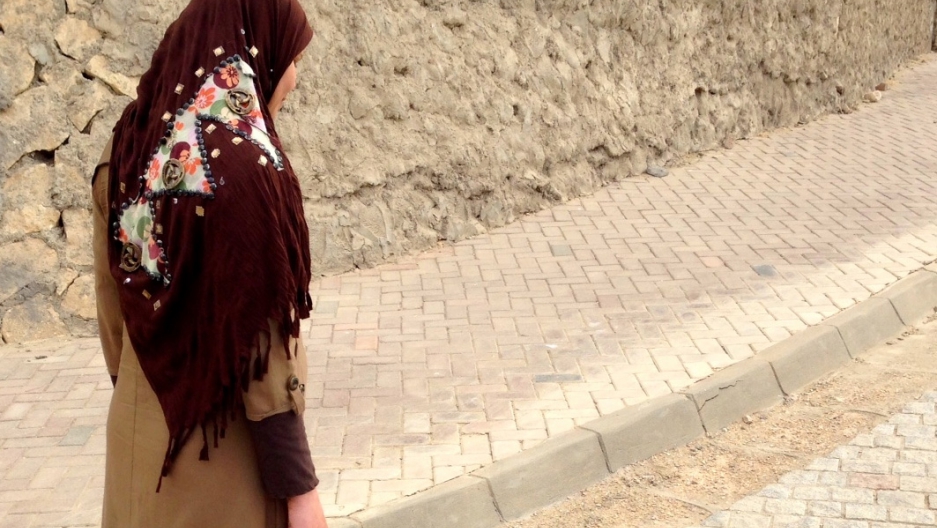 Somaya, like 91 percent of Egyptian women ages 15-49, underwent FGM when she was young and vows not to subject her daughter to the procedure.
Credit: Deena Adel/The GroundTruth Project
Share

CAIRO — It was almost 20 years ago, but Somaya’s hands still shake when she recalls the day she was cut.

“There was blood everywhere,” she said. She was 12 at the time, and little Somaya had been told this was something all girls went through before they enter womanhood — a rite of passage. They had to be “purified.”

Somaya, who has requested the use of only her first name to protect her identity, told herself to be brave as the local doctor approached her with his tools. But she couldn’t stop herself from screaming. She felt excruciating pain as he proceeded to cut and remove her clitoris. Then she blacked out entirely.

When she regained consciousness, she was lying in a pool of her own blood.

“The doctor told them to leave me on the floor until the bleeding stopped, so that I wouldn’t dirty the bed or the furniture,” she said.

The most damaging and distressing moment of Somaya’s life was a routine procedure in her village in Al Sharqia, Egypt. Her experience was hardly unique — her mother, sisters, neighbors and friends had all gone through it, too.

Ninety-one percent of Egyptian women ages 15-49 have undergone female genital mutilation (FGM), according to data from Egypt’s 2008 Democratic Health Survey. UNICEF reported that as of 2013, Egypt had more than 27.2 million victims of FGM, more than any other country in the world. In this destructive procedure, the female genitals are partially or entirely removed, with one goal: to inhibit a woman’s sexual feelings.

FGM was officially outlawed in Egypt in 2008, but the practice remains widespread. Though the practice is illegal, no one had actually been convicted for committing this particular crime — until now.

Dr. Raslan Fadl, the first doctor to ever face trial in Egypt for performing FGM,was sentenced to two years and three months in jail for the death of 13-year-old Suhair al-Bata'a, who died during the procedure in June 2013.

It is a legal precedent that activists consider a big step forward in their fight against the practice.

This is a crushing victory,” said lawyer Reda al-Danbouki, head of the Women’s Center for Guidance and Legal Awareness. “We are very pleased with the verdicts.”

Still, the practice remains widespread and underreported in Egypt, though anti-FGM activists say they hope Monday’s verdict will work to change this pattern.

Families who carry on the practice believe it’s essential for religious and moral reasons and value the time-honored tradition over the new law. Thus cases of FGM largely go unreported.

If a case is filed, it is unlikely to make it to court because many local prosecutors believe that female circumcision is a private issue.

And even if the ban on FGM is implemented, activists have criticized the law for being too lenient. Punishments range from three months to two years in prison or an alternative fine of 1,000 to 5,000 Egyptian pounds (about $136-$680).

Why the practice continues

The exact origins of FGM are disputed, but it is widely believed that female genital cutting started in pharaonic Egypt. The first historical mention of male and female circumcision appeared in the writings of the Greek geographer Strabo, who visited Egypt around 25 B.C.

"One of the customs most zealously observed among the Egyptians is this, that they rear every child that is born, and circumcise the males, and excise the females," Strabo wrote in his encyclopedia of geographical knowledge, Geographica.

Many in Egypt believe that FGM is rooted in religion, and that it is parents’ duty as Muslims to cut their daughters. Though this claim has been refuted by Al-Azhar, the Sunni Muslim world’s premier Islamic institution, the conviction remains, and the practice continues among the majority of Egypt’s Muslim families.

Many Christian families in Egypt also practice FGM, claiming that they are continuing the practice for “moral” reasons—FGM is viewed as a sign of a woman’s chastity.

Generation after generation, regardless of religion, mothers allow their daughters to experience the same unspeakable pain and permanent damage they went through, carrying on an ancient tradition banned by law and not endorsed by religion.

“Part of it is myth,” said Vivan Fouad, a prominent anti-FGM campaigner and a leading figure in the governmental campaign against FGM. Many still wrongly believe that if they don’t circumcise girls, they will grow up to be sex-obsessed creatures – a belief that is perpetuated by respected community and religious leaders, who also circumcise their own daughters.

Many also believe the practice has actual health benefits. To the contrary, the long-term implications of FGM include infections, infertility and difficulties during childbirth, said Dr. Iman Anwar, a Cairo-based gynecologist. And there are immediate negative effects, too, including excessive bleeding, trouble while urinating, and even, sometimes death.

Suhair’s al Bata'a's father took her to the private clinic of Dr. Fadl despite the young girl’s protest. Fadl was a respected figure in the neighborhood known to perform several FGM ‘operations’ per day.

After reading about the incident in the local paper, a group of campaigners against FGM, including the lawyer Danbouki, lobbied Egypt’s general prosecutor to pursue the case. It wasn’t easy. The first prosecutor they approached was not receptive to the idea. “He himself believed that female circumcision was a necessity,” said el-Danbouki. “So he sympathized with the doctor.”

Eventually the group of activists succeeded in getting a different prosecutor to understand the significance of the case, and prosecution took the case to court in March. Suhair’s father was also tried for his role.

The initial verdict didn’t go as activists had hoped — both the doctor and the father were acquitted. Lawyers and anti-FGM activists pressed the prosecution to file an appeal, a move that finally reaped success.

Fadl has been sentenced to two years in jail for manslaughter and an extra three months for performing the illegal FGM operation. His clinic was also ordered to close for a year.

Suhair’s father was also found guilty for taking his daughter to be mutilated. He was handed a three-month suspended sentence.

”Overall, it was still considered a success that the case made it to court at all,” said Fouad, who is a member of the Cairo-based National Population Council. “This sets a legal precedent. We had one case this year, maybe next year we’ll have two.”

Fouad thinks the importance of the law lies beyond putting people behind bars, and in creating awareness and getting people to recognize that FGM is wrong.

“People used to say that female circumcision is just part of our culture, but now more people are starting to refer to it as a crime,” she said.

The legal framework to protect women and children does exist in Egypt, said Philippe Duamelle, UNICEF’s representative in Egypt, but more needs to be done — the law needs to be enforced more effectively.

“The penal law criminalizes FGM, and the child law protect the rights of children,” said Duamelle. All the legal instruments are there, he said, and yet the tradition continues.

Along with it being ingrained in Egyptian culture and traditions, Fouad says part of the reason FGM continues is discrimination against women. The practice reflects deep-rooted inequality between men and women, she said, and reinforces stereotypes that prevent women from advancement in society.

“People think this will help control a woman and her natural instincts,” said Fouad.

To combat that, Fouad and the campaigners say they need to work on empowering women in society, which is no easy feat. A recent poll conducted by Thomson Reuters ranked Egypt as the worst country for women's rights in the Arab world.

This is not, however, a fight between the sexes, said Fouad. Women aren’t the only ones harmed by FGM. It harms men, too.

“It affects the intimate relationship between a man and a woman,” she said. “This is not just women’s rights, it’s also men’s rights, child’s rights and family rights.

In Somaya’s case, FGM did not just break her, it also tore her family apart. Her unwillingness to open up emotionally or sexually led to her divorce - only a year after her wedding day. She could not tolerate the slightest touch from her ex-husband.

“It was physically painful,” she said. “I cried on my wedding night because the minute he came too close, all I could see was flashbacks of me lying in my blood.”

She was 19 and pregnant when he divorced her.

Upon hearing the news of the country’s first FGM conviction, Somaya broke into a happy ululation.

“I hope they get every last one of these doctors who have ruined the lives of many generations,” she said.

There has recently been a significant drop in the procedure. The most recent survey by the DHS in 2008 found that 74 percent of Egyptian girls ages 15-17 have undergone FGM, compared to the overall figure— which includes older women — of 91 percent. The numbers are lower in wealthier families and women who live in urban areas, as well as girls whose mothers have a high school or college level education. The DHS report also indicated that a further decline is expected in the next 15 years.

“Now what is important is not just that the progress continues but that progress accelerates,” said Duamelle. “And this would happen by not only having a solid legal framework but also in enforcing these laws.”

Since her divorce, Somaya has moved to Cairo and has been raising her child on her own. Her daughter is now 11, almost the same age as she was when she went under the knife.

“I will never do to her what my mother did to me,” she vowed.