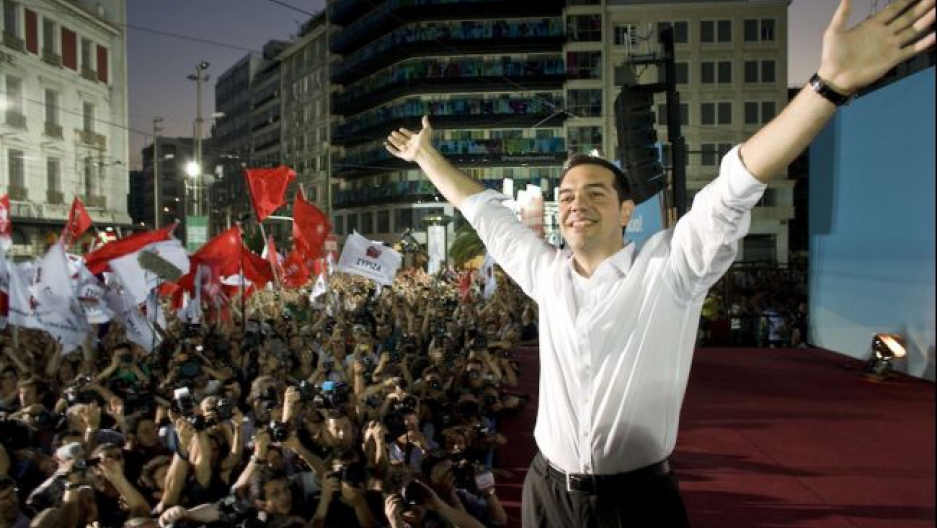 It's easy to understand why Greek voters gave Tsipras and his Coalition of the Radical Left party, also known as SYRIZA, such an emphatic victory in Sunday's election.

Their country has been the epicenter of the euro zone's debt crisis since 2009. Since then, Greeks have seen their economy shrink by a quarter. Public services have crumbled, living standards plummeted, unemployment and poverty rates hit record levels.

Voters blame governments of the established conservative and center-left parties: first for creating the economic mess by secretly running up massive budget deficits and debt levels; then prolonging the agony through slavish adherence to austerity diktats imposed by the euro zone powers in Brussels, Frankfurt and Berlin.

SYRIZA campaigned on an offer of hope.

Tsipras — at 40, modern Greece's youngest leader — promises a break from the past by overturning austerity policies, challenging international creditors and relaunching the economy with taxes for the rich, and new investment in jobs and services.

SYRIZA moderated some of its demands to win over wavering centrist voters — it no longer wants to pull out of NATO and, together with over 70 percent of Greeks, the party says Greece should keep the euro.

Despite that, Tsipras' campaign promises have Greece on a collision course with its European partners — or at least with those in northern Europe, especially Germany the biggest contributor to the €240 billion ($279 billion) bailout program, which has kept Greek finances afloat over the past five years.

Battle lines were being drawn up even before Tsipras was sworn in as prime minister on Monday morning.

Two seats short of an absolute majority in Greece's 300-seat parliament, Tsipras chose as his coalition partners the christian conservative Independent Greeks (ANEL) party — whose views on issues ranging from immigration and education to gay marriage are anathema to many of SYRIZA's leftist supporters.

What unites the two parties — besides a strong pro-Moscow approach to foreign policy — is their stated determination to renegotiate the term's of Greece's massive public debt even at the cost of confrontation with the European Union.

As Tspiras was wrapping up his coalition, officials at EU headquarters and in northern capitals were insisting there will be no major reworking of the bailout terms. Greece, they say, will have to stick to its debt repayments and commitments to keep government finances tight.

"The Greek election result will not change Finland's positions with regard to the management of the euro-area crises," said a statement from Finnish Prime Minister Alexander Stubb. "Finland will not accept a demand for debt cancellation."

The most Finland would be prepared to countenance is giving Greece few months grace to meet its targets, provided the new government sticks to all previous commitments and reforms," Stubb said.

If Greece is going to stay in the euro, one side will have to blink.

Tsipras could well be forced back away from election promises to halt interest payments, demand creditors write off a big chunk of Greece's debt, and roll back painful economic reforms.

Alternatively, he will have to do what leaders across cash-strapped southern Europe have failed to do over the past five years — persuade German Chancellor Angela Merkel to reverse her conviction that austerity and reforms are the best way to put the economy back on its feet.

That will be difficult.

More from GlobalPost: You really should be paying attention to Greece right now

Merkel refused to give in to repeated appeals to cut Greece some slack when they came from a political ally — defeated conservative Prime Minister Antonis Samaras.

If she buckles under demands from SYRIZA, disgruntled citizens elsewhere will be encouraged to follow the Greeks in turning away from the political center.

Spain's new We Can (Podemos) party is already topping polls there on a SYRIZA-inspired program ahead of elections due there before December.

In Italy, Portugal, France and other struggling euro zone economies, populist anti-austerity parties of the left and right might also be boosted if SYRIZA is seen to win Greece advantages that the mainstream couldn't.

If neither Athens or Berlin backs down, Greece could be facing both a default on its debt and ejection from the euro zone.

That's a scenario Tsipras and Merkel say they want to avoid. A Grexit would risk throwing Greece and other euro zone countries into renewed crisis, triggering fears the whole bloc could unravel with uncertain repercussions for the world economy.

Despite the entrenched positions, some economists see a chance of squaring the circle.

"Lack of an agreement may lead to Grexit, which would be so bad for all that both the new Greek leadership and euro-area partners have very strong incentives to avoid it," writes Zsolt Darvas, senior fellow at the Bruegel economic think tank in Brussels.

"The Grexit threat will be hanging over the negotiators like the sword of Damocles."

Darvas says a mutually beneficial deal could be worked out that gives Greece more time to repay its debt and at lower interest rates, while a relaxation of EU deficit rules could give the new government in Athens some fiscal leeway to reduce social pain and support investment.

Officials attending a meeting of euro zone finance ministers in Brussels on Monday suggested there could be some wriggle room. "We have common goals, ensuring Greece as a nation can stand on its own two feet, clean up its finances and become a jobs generator again," EU Economic Commissioner Pierre Moscovici.

Despite the bluster against the bailout conditions, Tsipras has limited short-term maneuver room and needs to persuade creditors to maintain backing to Athens.

The country's coffers remain close to empty and without the EU and International Monetary Fund freeing up more money fast, the government may run out of funds within the next three months.

Meanwhile, it's not just the economy that has Greece's partners spooked.

Parties in the new government share a strong pro-Russian tendency that could make it more difficult for NATO and the EU to adopt a tougher line in response to Moscow's renewed military action in Ukraine.

Tsipras has echoed Russia's portrayal of the Ukrainian government as "fascists." His new coalition partner — Panos Kammenos, leader of nationalist ANEL party — last week said the EU should drop all sanctions against Russia.