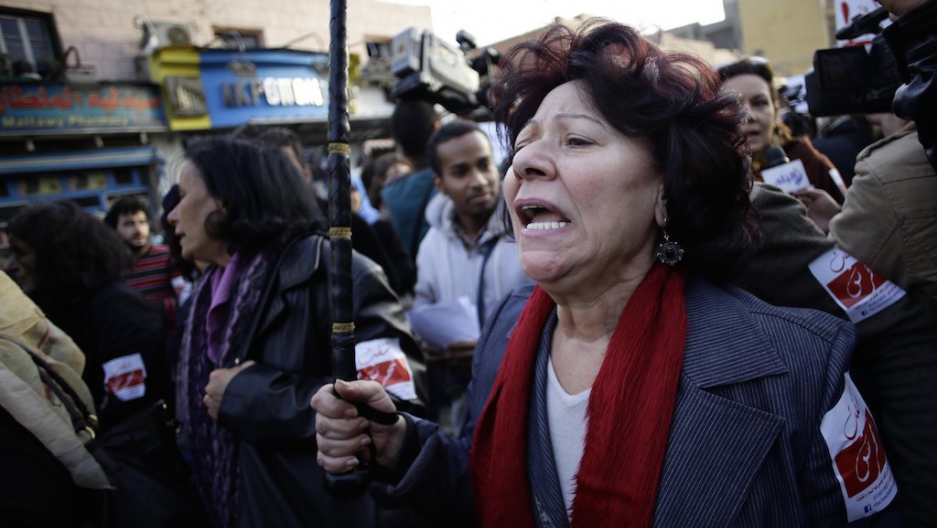 An Egyptian protester shouts slogans holding a police night stick during a demonstration to demand an end to sexual violence against women on February 6, 2013 in the Egyptian capital of Cairo.
Credit: Stringer
Share

CAIRO, Egypt — An Egyptian appeals court on Monday handed down the first conviction in the country’s history for female genital mutilation (FGM).

Dr. Raslan Fadl was sentenced to two years in jail for manslaughter following the death of 13-year-old Sohair al-Bata'a, who died during the procedure in 2013.

He was sentenced to a further three months for performing the operation, which is illegal in Egypt, and his clinic has been ordered closed for a year.

The girls’ father, who paid for the surgery, was also found guilty and given a suspended sentence of three months with labor.

Fadl was originally found not guilty of the crime at a court in the Nile Delta town of Mansoura in November, despite strong evidence against him.

Monday's decision represented a victory for the anti-FGM movement in Egypt, where — despite FGM being outlawed in 2008 — prosecutions were non-existent.

"It's a historic moment," said Suad Abu-Dayyeh, a consultant at Equality Now — a human rights organization focusing on the rights of women and girls. "It's a lesson for doctors to ban medicalization of FGM in Egypt."

Ninety-one percent of Egyptian women between the ages of 15 and 49 have undergone FGM, according to UNICEF — about 27.2 million people, the largest number in any country in the world.

According to Equality Now, nearly one in four survivors of FGM worldwide is Egyptian.

In Egypt, most FGM operations are performed by a doctor. In the past, traditional midwives, barbers or sometimes mothers themselves would perform the procedure, often stopping the bleeding by putting dust or salt on the wound.

In Egypt the most widely practiced version is the removal of the clitoris and labia minora. Most girls undergo the procedure between the ages of 9 and 13 but victims can be as young as 9 months old.

Many believe the procedure curbs women’s sexual appetites and makes them less likely to commit adultery. Others say that if a woman has not undergone FGM it limits her prospects for marriage.

Though support for the practice appears to be declining, 54 percent of women and 57 percent of men in Egypt believe in performing FGM.

Despite a ruling against the practice by Egypt’s Grand Mufti in 2006, many see the practice as a religious duty. In Egypt, both Muslims and Christians perform FGM.

The court decision represents a small victory in a country with a dismal record on women’s rights. Egypt has become notorious worldwide for sexual harassment and hundreds of women have been victims of mob sexual assaults over the last three years.

In fact, more than 99 percent of women in Egypt report experiencing some sort of sexual harassment. And while a new constitution enshrines women’s rights to work, seek education and hold political office — and criminalizes violence against women and discrimination on the basis of gender — many activists have little hope that such rights will be upheld any time soon.

Despite his conviction, Dr. Fadl could still avoid justice.

“He still might escape,” said Atef Aboueleinein, a lawyer with the Women’s Center for Counsel and Legal Defense, the prosecution lawyer in the case. “The police still have to go and get him."