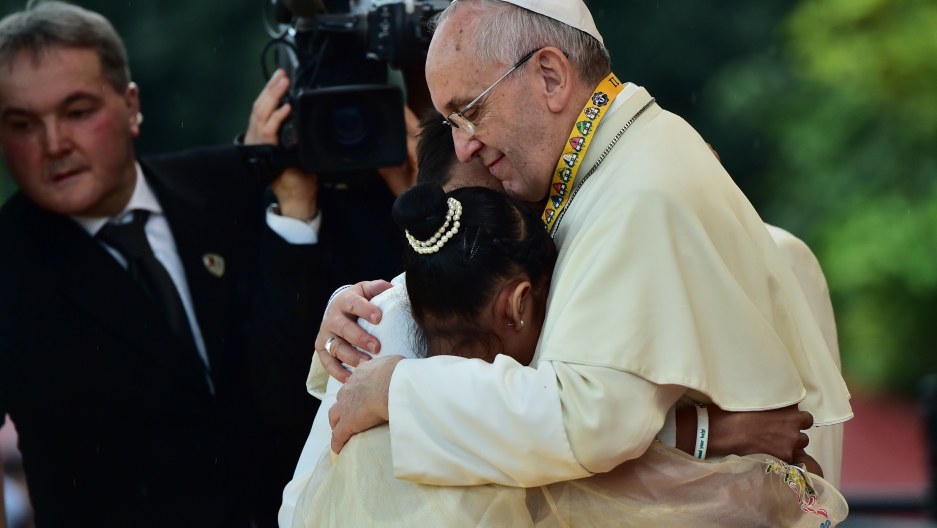 On each pilgrimage, Pope Francis gives the global audience another glimpse into his complex mind.

The first unscripted pope in the age of mass media gives lengthy airborne press conferences, as when he famously replied, “Who am I to judge?” in reply to a question about gay priests on the flight from Brazil to Rome last year.

Pope Benedict avoided reporters and the charismatic John Paul rarely exposed himself to long encounters with the press. Both popes gave selective interviews to reporters or biographers they trusted.

Francis thrives on the intellectual agility of being interviewed, a trait consistent with Jesuit training in the Socratic method: question sparks answer, answer drives new questions and the wheel of learning turns.

But improvisational remarks have unpredictable receptions.

At a Sunday Mass for 40,000 people at University of Manila, 12-year-old Glyzelle Palomar, who lives in a foundation home for abandoned children, read a statement in her native dialect, translated for the pope and press.

Well-groomed, in a lovely dress, she said: "There are many children neglected by their own parents...[and] are also many who became victims and many terrible things happened to them like drugs or prostitution."

Voice breaking, Glyzelle asked, "Why is God allowing such things to happen, even if it is not the fault of the children?"

As she broke down, Francis moved close; she wrapped her arms around his waist, burying her face in his side.

“Certain realities of life are seen only with eyes that are cleansed by tears,” he said as part of a longer, almost cinematic response.

And yet on the plane ride home from the Philippines, Francis’ moving response to the young girl sank in the deluge of his almost immediately infamous comment about birth control.

“Some think that — excuse the language — that in order to be good Catholics, we have to be like rabbits,” Francis said. “No. Responsible parenthood.”

In the Philippines, 35 percent of children live in poverty and an estimated 1.2 million children live on streets, according to Child Protection Network Foundation data from 2009.

At that same papal Mass in Manila, a 14-year-old boy saved from homelessness, Jun Chura, told Francis about "feeding myself with what I can find in the garbage... sleeping on the sidewalk."

The pope took both Jun and Glyzelle in his arms — a powerful image.

The Vatican transcript of his comments in Spanish, translated for the crowd who spoke English, reveal a pontiff grappling with the question that haunts The Brothers Karamazov, the novel by Fyodor Dostoyevsky whom the pope recently called "a life mentor to me."

The weeping Glyzelle echoed the question posed by the spiritually tormented Ivan Karamazov. How can an all-loving God allow children to be brutalized, neglected and tortured, enslaved, raped and killed? For Ivan, the agony of children contradicts the existence of of a loving God.

"Listen," cries Ivan to his brother Alyosha, a seminarian. "If all men must suffer to pay for the external harmony, what have children to do with it, tell me please? It’s beyond comprehension why they should suffer."

Alyosha counters that he has forgotten the sacrifice of Christ, who atoned for the sins of humanity. At that, Ivan scoffs.

Francis was speaking to Glyzelle, the larger crowd of Filipinos and to an audience around the world.

"Women are able to see things differently than men," he began, complimenting the girl. "Women can ask questions that we men just don’t get. Pay attention. She today asked the one question that doesn’t have an answer. And she couldn’t say it in words. She had to say it with tears.”

The pope went on, telling the boy: “I thank you, Jun, for being so brave in talking about your experience.”

He turned back to the girl: “Your question, deep down is almost unanswerable.”

And then he began to answer: "Only when we are able to weep over the things that you experienced, can we understand and give some kind of response. The great question for everybody is: ’Why do children suffer?’... Only when our hearts can ask this question and weep, can we begin to understand.”

Francis, like Ivan, is horrified at the unanswerable question; but the pope continues in a cri de coeur: “The marginalized weep, those who are neglected weep, the scorned weep, but those of us who have relatively comfortable life, we don’t know how to weep. Certain realities of life are seen only with eyes that are cleansed by tears. I ask each one of you to ask: Can I weep? Can I weep when I see a child is hungry, on drugs and on the street, homeless, abandoned, mistreated or exploited as a slave by society?”

Ivan, in reference to the sobbing of an abused child, tells his brother: “Those tears are unatoned for. They must be atoned for or there can be no harmony...And if the suffering of children go to swell the sum of sufferings which was necessary to pay for truth, then I protest that the truth is not worth such a price.”

Francis, seeking to comfort the child next to him, says: “Let’s learn to weep, the way [Glyzelle] taught us today. Let’s not forget this witness. She asked the big question – why do children suffer? – by weeping; and the big answer which we can give, all of us, is to learn how to weep.”

Francis ties the child’s question to a larger mystery. “In the Gospel, Jesus wept. He wept for his dead friend. He wept in his heart for the family which lost its daughter. He wept in his heart when he saw the poor widowed mother who was burying her son....If you don’t learn how to weep, you are not a good Christian....Be brave. Don’t be afraid to cry!“

Bravery is the act of overcoming fear. Francis is telling people to loosen social restraints and bear witness.

But do tears dry in healing, relief for the afflicted, a rough form of justice?

In a December interview with Andrea Tornielli of La Stampa/Vatican Insider, Francis said that the question of children suffering ”has always gone round in my heart. There is no explanation... When I come across a suffering child, the only prayer that comes to mind is the ‘Why’ prayer. Why, Lord? He doesn’t explain anything to me. But I can feel Him looking at me. So I can say: You know why, I don’t and You won’t tell me, but You’re looking at me and I trust You, Lord, I trust your gaze.”

The Social Darwinists who control the US Congress would cheerfully support God’s gaze and go on rationalizing their war upon the poor. But Francis sees God as the face of the the poor, the other, and has tied ”globalization of indifference” to the plight of refugees and immigrants.

Back in Rome, at his Wednesday public audience, Francis made a point of saying that large families do not cause poverty, a clear nod to people who took offense at the"rabbits" image; instead he blamed "an economic system that has removed the human person from its focus and has placed the god of money" in its place, according to Catholic News Service.

Struggling for an answer to Glyzelle’s Dostoyevskian question, Francis showed a rare moment of vulnerability, and another side of the compassion that has made him such a popular figure.

What he has not articulated is an ethos of justice for all people clinging to the edges. Meanwhile, as this probing, intrepid moralist searches for that credo, his journey is a story the world keeps following.

GroundTruth religion blogger Jason Berry is the author of Render unto Rome: The Secret Life of Money in the Catholic Church.