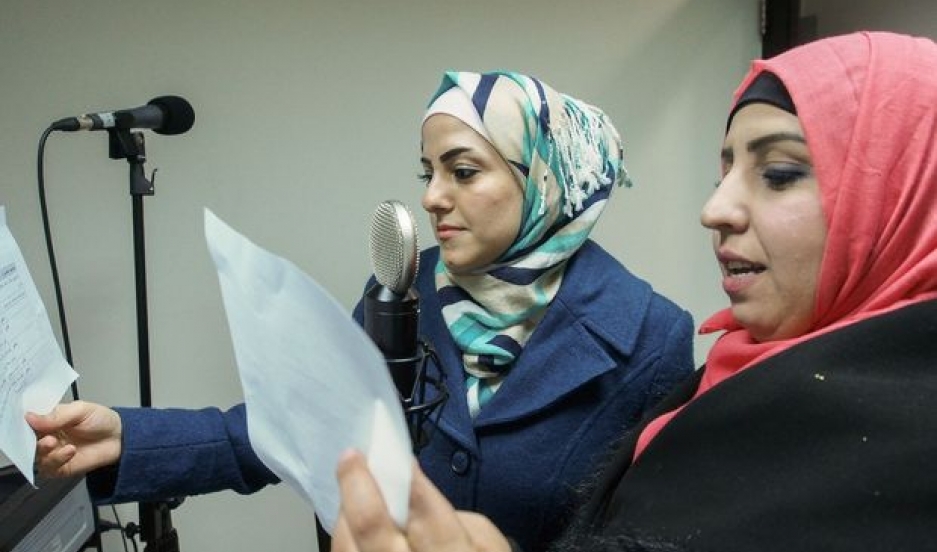 Actors read lines for the radio soap opera "We Are All Refugees."

Picture the scene: A brother is trying to force his 15-year-old sister to marry a man against her will. Fadi and his sister, Reem, are Syrian refugees living in a camp in Jordan with thousands of others just like them. The pair has a tough life and surely things would be a lot better for Reem if she could get out of the camp and start a new life with a Jordanian husband.

Reem and Faidi may sound real, but they are fictional characters in a new radio soap opera called, “We Are All Refugees.”

The popular soap has been airing in Arabic throughout the Middle East as a pilot series on Radio SouriaLi, a non-profit and independent radio station co-founded by Syrian exile Honey Al Sayed, who is based in Washington, DC.

Al Sayed is joined as a producer on the project, which was funded in part by the United Nations refugees agency, by British filmmaker and journalist Charlotte Eagar. According to Eagar, the idea for the series came to her when she visited Zaatari, a UN refugee camp in Jordan.

While looking for a cast for the play, Eagar said the refugee women in Zaatari began to tell her stories about the very real drama associated with living in the camp. The real life challenges facing refugees inspired “We Are Refugees,” which is written by a joint team of both Syrians and Jordanians and has so far broadcast a six-part pilot.

“The lead character in our soap opera is a young guy called Firas,” says Eagar. “He’s a young Syrian, and his mother and his sister [live] in the refugee camp with his elder brother. The elder brother wants to marry the sister off to keep her safe, and he wants to marry a sexy young widow named Nora.”

Firas, who works as a depressed and underpaid valet parker, was once an incredibly talented musician — a passion he abandoned after his middle class family pushed him to become an engineer. He fled Syria because of the war, ultimately abandoning his engineering degree.

“He ends up in Amman,” says Eagar. “Suddenly, his music becomes the door through which he can go and have a new and interesting life.”

Firas discovers that a professional musician in Jordan can earn much more than a valet parker. Though it was viewed as an “irresponsible” choice in his upper middle class Syrian community, Firas reinvents himself like so many other refugees.

For Al Sayed, the time has long been right for this type of storytelling.

“This is something I’ve been advocating for for a very long time,” she says. “I truly believe in the interplay of the arts and the media. When they come together, it’s amazing what it can do for peacebuilding practitioners, what it can do for transition in conflict, and what it can do to reform a whole conflict.”

The narrative of “We Are All Refugees” works with the population being affected — it tells a story that is independent of the fighters, the government and even the media.

Eagar and Al Sayed say the production team is currently raising funds to record “We Are All Refugees" in English, and hopes to eventually broadcast the soap in the US and the UK.

“To have this in English is very important,” says Al Sayed. “There’s no lack of information about news of what’s happening in Syria. It’s the narrative that’s being told that’s the issue. ... The limited narrative, it’s limiting the people as a whole.”

“We have a moral obligation to help people,” she says. “It’s in our best interests — these refugee camps are the recruiting grounds of ISIS. ... If you’re in a refugee camp and you have no hope, no money, and life’s awful, you may well go to the guys who are giving you a cause, money, and a gun. What we really hope is that by getting their story out there the world will really sit up and look and see that something has to be done.