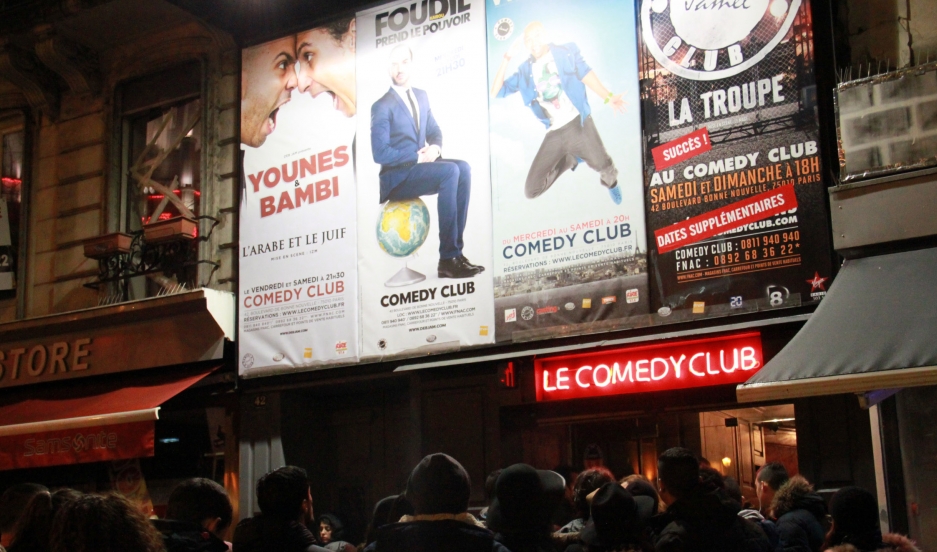 Outside Paris' Le Comedy Club before the performace of comedians Younes and Bambi, aka Younes Depardieuis and Samuel Djian. Younes is Muslim. Samuel is Jewish.

Have you heard the one about a Jew and an Arab who walk into a comedy club?

Just a week after the deadly attacks on the caricaturists at Charlie Hebdo and on Jews at a kosher supermarket, a French Muslim comic and a French Jewish comic took to the stage at Le Comedy Club in Paris — and made fun of each other.

The duo is called Younes and Bambi. Younes Depardieuis, 27, is the Arab. Samuel Djian, 22, aka Bambi, is the Jew.

They begin their act with a “shalom aleikum!” That’s a traditional Jewish greeting mashed together with a traditional Arabic greeting.

I learned about Younes and Bambi when I was in a taxi in Paris. I looked out the window and saw a poster advertising L’Arabe et l’Juif. The Arab and the Jew. In the poster they’re butting heads with their mouths open, screaming.

The comedians start off their routine like many comedians do: They ask if their peeps are in the house. Younes, of North African descent, screams out, “Algerians and Tunisians here?”

“Yeah!” A part of the crowd shouts.

“Yeah!” Another part of the crowd shouts.

France has more Arabs and Jews living alongside each other than any other country in Europe; there are about 6 million Arabs and some 600,000 Jews living in France.

Even after a week of extreme tension between the two groups, Arabs and Jews came out to the comedy club to laugh. At each other. 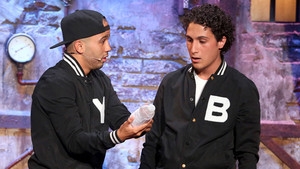 Younes and Bambi on stage.

Courtesy of Younes and Bambi.

The comedians are equal opportunity offenders. They start off telling the audience they’re promoting fraternité. Then they begin to rip on each other.

They had this riff on the stereotype of the Arabs who populate Paris’ rough immigrant suburbs: “Arab people are much more violent. But it’s the Jews who write the statistics and control the media. So, who cares?”

There’s a history of minorities dominating comedy in France. Growing up with a different culture makes for great material.

The French African comic Dieudonné used to perform with a Jewish comedian cracking ethnic jokes, but now he’s accused of embracing anti-Semitism and Holocaust denial in his comedy.

Dieudonné popularized the quenelle, an arm gesture seen as a sort of upside-down Nazi salute that French officials have tried to ban. He was recently arrested in France after hinting that he identified with the attacker at the kosher supermarket.

On the other end of the spectrum of minority comics in France is Jamel Debbouze. He’s of Moroccan descent and a big star. He founded Le Comedy Club to showcase new talent, especially comics from North African and Muslim backgrounds. In one bit, the comedians act out a conversation with a Moroccan hotel clerk:

“We Moroccan people are smart. Americans went to the moon? We will go to the sun, hopefully, one day.”

“We are going by night, you stupid guy.”

Most of their one-liners rely on these timeworn tropes: jokes about Arabs being illiterate and dangerous and lazy, and jokes about Jews being rich doctors and lawyers.

There was even this groaner about the Jews sinking the Titanic:

“It was an iceberg!” Bambi says.

The show does touch on some sensitive subjects. There are September 11 jokes that take jabs at Arabs, and even a few Holocaust jokes. Then the act descends inexplicably into impressions of Michael Jackson, which ended up being a huge hit.

You may be wondering how the comics dealt with the elephant in the room — the recent attacks in Paris. They didn’t say a word.

Djian tells me their patron, Jamel Debbouze, advised them not to, because they’re young and trying to break into the mainstream comedy scene. They don’t want to make a wrong move.

Mohamed Mesti, 31, who laughed loudly throughout the show, said after the recent events, it felt like the right time for this kind of humor.

“It’s important to be able to laugh about Jews, Arabs, and mixed people of different backgrounds, whatever religion they are — to laugh together,” Mesti said.

He said he, as a religious Muslim, follows the example of the Prophet Mohammed.

“He had Jewish friends,” Mesti said. “It’s important to mix with Jewish people.”

After a horrific week in France — where controversial humor about the Prophet Mohammed became cause for murder — this stand-up duo gave French Muslims and Jews some comic relief.