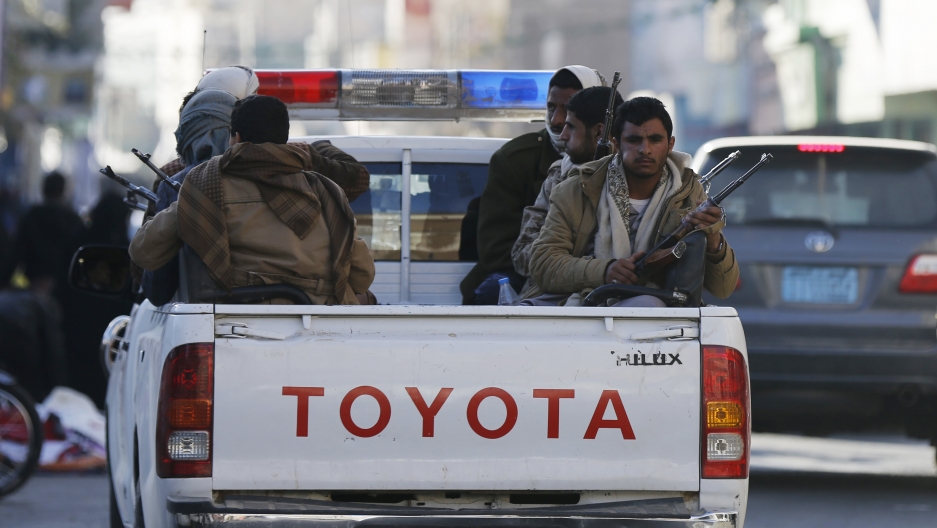 Houthi fighters ride in a truck on a street leading to the Republican Palace in Sana'a, Yemen, on January 20, 2015.

When the Houthis, a rebel group from northern Yemen, occupied parts of Yemen's capital last summer, government soldiers didn't prevent them from holding massive demonstrations. And when they took over some government buildings in September, Yemeni troops stepped aside. Now the rebels are at it again.

Rebel leader Abdul Malik al-Houthi — the movement bears his family name — then appeared on Yemeni television, laying out a series of demands that Yemeni viewer Hisham al-Omeisy translated into English and tweeted live.

Made this to share with colleagues. All those useful @omeisy AMH speech tweets storified here https://t.co/U1fzze1nUY

Houthi focused on the Yemeni government's failure to uphold its part of the Peace and National Partnership Agreement (PNPA) signed in September. "Al-Houthi said that the government needs to stick to it — that a lot of clauses have been violated, and not followed by the government," Omeisy says. "Hence, the Houthi actions of late." For example, the Houthi has control of Yemeni state media, which broadcast the rebel leader's speech Tuesday night.

Yet Omeisy says the presence of rebel soldiers, and the occasional shelling, have made more of an impact on Western media than on Sana'a residents. “Everybody's armed in Yemen,” he says. “You go down the street even — before the conflict — and everybody's basically armed. Shooting in the air is actually quite common."

And there's been plenty of military movement in the capital over the past year. "When things like this happen — when they say, like, 'Now the Houthis are moving into Sana'a,' the media tends to exaggerate. For us who live here in Yemen, this is not actually big news,' Omeisy says.

Yemen's government, under President Hadi, has also made little headway in improving living conditions. "What we've seen is a deterioration of the situation overall — the electricity, the unavailability of gasoline, cooking gas, oil and the security [problem with al-Qaeda].  What Yemenis need to see is change."

That desire for change is why the Houthis enjoy public acceptance. "Even if we don't like them, the Houthis are the strongest player right now," Omeisy says, "and that's why many Yemenis accept them as the player that can influence the current status quo and perhaps change it for the better."

But the Houthis' tactical successes in Sana'a may not make the group any better able to govern Yemen — or even hold the capital. "[Houthi] brought a lot of people from the hinterlands into Sana'a," says Omeisy, who lives in the capital. "He needs to pay them, he needs to feed them, he needs to give them homes. He could do that for a period of time, and he can probably fund it — but not for long."