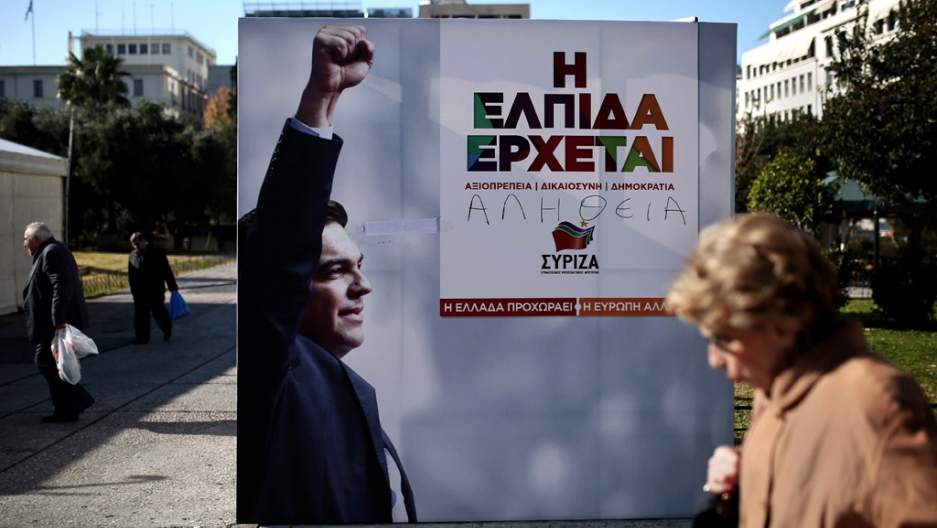 A woman walks past a banner of SYRIZA party reading ''the hope is coming'' at the party election campaign kiosk in Athens on Jan. 17, 2015.
Credit: ANGELOS TZORTZINIS
Share

Update: Greek leftwing leader Alexis Tsipras struck a deal with a right-wing party to form a government to confront international lenders and reverse years of painful austerity following a crushing election victory by his Syriza party. In other words, as Paul Ames wrote last week, the worst-case scenario for the European Union leadership just happened.

LISBON, Portugal — Greece is back.

Five years since the country's ruined finances triggered the euro zone debt crisis and sent tremors through the world economy, uncertainty over Sunday's general election has once more made Greece the center of international attention.

Markets are spooked; politicians are seeking to reassure the world over the future of the euro; headline writers are dusting off references to Homer or the Bee Gees. Greece is The Word once again.

Here's what you need to know about Sunday's election and why it matters.

For the leadership of the European Union, that would be a big win for the Coalition of the Radical Left, or SYRIZA. With a big enough majority the party could follow through on a pledge to write off much of Greece's colossal public debt — at 175 percent of gross domestic product, the world's second highest, after Japan.

SYRIZA says it wants an orderly renegotiation of the debt, but if Germany and other EU nations refuse to play ball, Greece could just stop paying.

Such a default, plus SYRIZA's tax-and-spend plans to reverse years of austerity, could force Greece out of the euro zone even though a majority of Greek voters (and SYRIZA's leadership) say they want to stay in.

The much-feared Grexit would risk exposing other euro zone fault lines, raising the prospect of the currency bloc shattering amid financial chaos and untold consequences for the world economy.

Sounds bad, but what are the odds of all that really happening?

Probably not that great. The latest opinion polls have SYRIZA out front, with a 3 percent lead over the conservative New Democracy party of Prime Minister Antonis Samaras.

Still, it may not get a majority in parliament that would allow it to govern alone or with other radical-left allies.

Greece's political landscape has been splintered during years of crisis. Voters abandoned New Democracy and the once-powerful Socialists, ending the old two-party system. That's favored not only SYRIZA, but a raft of other new parties ranging from the Nazi-inspired Golden Dawn to the centrist To Potami (The River) party who are battling for third place.

Even though the electoral system grants the winners 50 extra seats, most analysts expect SYRIZA will need to form a coalition with somebody closer to the political mainstream if it wants a working government.

To Potami are the most likely candidates, but their leader — well-known former TV journalist Stavros Theodorakis — is strongly pro-Europe and says he'll only go into government with allies who stick to Greece's EU commitments.

Alternatives to an outright SYRIZA win could be a New Democracy-To Potami coalition bringing in smaller moderate parties that, more or less, follow the current path of austerity and cooperation with the EU. A To Potami and SYRIZA linkup could hope to negotiate an easing up on austerity and a rescheduling of Greece's debt payments, but without a radical, euro-threatening break with the EU.

Even if SYRIZA wins outright, many believe it could find a compromise with the EU, not least because any government will need European help to pay the bills.

"Both sides have an interest in avoiding the nuclear scenario," said a recent paper by Christian Odendahl and Simon Tilford of the Center for European Reform, a London-based think tank.

"The rest of the euro-zone will have to appear tough in order not to set a precedent for populist parties elsewhere, but it has little interest in precipitating a collapse of Greece’s banking sector. For its part, SYRIZA would have little choice but to try and find an agreement," they wrote. "It will face a €6 billion-12 billion ($7 billion-14 billion) funding gap in 2015."

A Greek and an EU flag wave in front of the ancient temple of Parthenon atop the Acropolis hill in Athens on Jan. 13, 2015.

So who are these SYRIZA folk?

The five-year economic crisis in Europe has thrown up radical political groups that have shaken the establishment across the continent, ranging from re-invigorated right-wing nationalists, such as the United Kingdom Independence Party or France's National Front, to leftists like SYRIZA and their Spanish allies Podemos (We Can).

SYRIZA is led by an eloquent, photogenic 40-year-old called Alexis Tsipras, who could become modern Greece's youngest leader. He presents the party as offering Greece, and Europe, a new deal bringing fresh hope after years of crisis and recession which have seen his country's economy shrink by more than 25 percent.

"The victory of SYRIZA will represent a new start for collaboration of all the progressive forces of southern Europe, putting the brakes on the policies of austerity that have led to stagnation, mass unemployment and over indebtedness," Tsipras wrote Friday in an op-ed published in the Spanish daily El Pais.

Nevertheless, SYRIZA has moderated its rebellious appeal as the prospect of gaining power looms. Tsipras now puts the emphasis on negotiation rather than confrontation with European partners. He wants to stay in the euro and says the party's plans to help the poor, create jobs and kickstart the economy won't bust the budget.

He no longer calls for Greece to leave NATO, although the party's Russia-friendly stance is raising goosebumps at alliance headquarters in Brussels.

“They want to turn the country into a European edition of Venezuela,” Prime Minister Samaras warned in a weekend TV interview. "I refuse to believe that the Greek citizens will ever allow SYRIZA, with its weird Third World obsessions, to come to power and use Greeks as its guinea pigs.”

If the timing is so dangerous, why are they having a snap election?

It's a constitutional thing. Greece had to elect a new president by the end of 2014. This is usually done quietly by parliament picking a worthy end-of-career politician for the largely symbolic post.

However, opposition from SYRIZA and other smaller parties blocked the government's candidate in three parliamentary votes in December. When that happens, the Greek constitution says a new parliament needs to be elected.

Samaras argues his government has put Greece back on track after years of painful reform. Greece clambered out of recession last year, although growth remains painfully slow.

Yet many Greeks blame his coalition of conservatives and their former arch-rivals from the center-left Pan-Hellenic Socialist Party for a sharp drop in living standards and public services since the crisis. Hence the support for radical alternatives.

A man gestures at the election centre of Greece's Syriza party in Athens on Jan. 14, 2015.

Surely if Greece does fall apart, Europe is better prepared to handle it this time?

In many ways, yes. Since the crisis erupted in 2009, the EU has set in place an architecture of bailout mechanisms, stability provisions and alert procedures to better hold the euro zone together and ring-fence problems in any one member.

The other weaker links from the darkest days of the crisis are showing encouraging signals. Spain just saw its first rise in employment since 2007; growing confidence in Portugal was marked by a whopping 34.8 percent increase in new car sales last year; Ireland is forecast to be the euro zone's fastest growing economy this year with a healthy 3.6 percent. They have been relatively untouched by market jitters over Greece.

Yet much fragility remains and a Greek default or exit could rock the euro zone's foundations.

Recovery in periphery nations remains tentative. At the core, Germany is slowing, and France and Italy face stagnation. Prices are falling in most euro zone countries. Fears deflation could drag the bloc into a long-term circle of decline are expected to force the European Central Bank to launch a controversial program Thursday reportedly worth €550 billion ($638 billion) to buy up government bonds in an effort to pump fresh money into the economy.

Experts are divided on whether that will do the trick. A major shock from Greece would certainly not help.

A SYRIZA victory will have unpredictable consequences. Although the party has toned down its leftist rhetoric, margins for reconciling its election promises with EU financial stability goals are slim.

Left-wing hopes that a Tsipras-led government could spur a Europe-wide swing against the austerity of recent years will run into a firm "nein" from Germany and other governments defending the economic orthodoxy.

Whatever happens on Sunday, the election looks likely to add to the uncertainty over Europe's ability to get its economic motor running again.