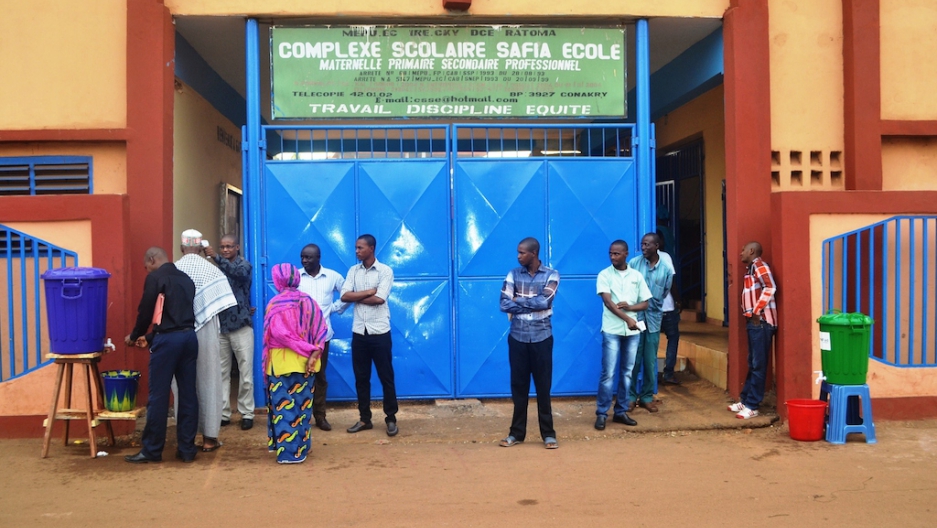 The entrance to the Safia school in Conakry on January 19, as students head back to class after nearly four months of school recess due to the Ebola outbreak.
Credit: Cellou Binani
Share

JOHANNESBURG, South Africa — Schools reopened in Guinea this week, just as Mali became the region’s latest country to be declared Ebola-free by the World Health Organization, following Nigeria and Senegal.

The two developments are signs that life is slowly returning to normal as West Africa recovers from the world’s worst-ever Ebola epidemic.

It is far from over yet. But there is, at last, hope that the end of the outbreak may be within sight.

There have been 21,614 cases of Ebola in this epidemic, and 8,594 deaths, according to the latest WHO figures. But crucially, the number of new cases is declining in Liberia, Sierra Leone and Guinea, the countries worst affected.

Dr. Tom Frieden, head of the Centers for Disease Control and Prevention in Atlanta, has said he is “confident” the outbreak can be ended, provided “nothing unexpected happens.”

“The largest, biggest risk is that it continues to fester and continues to spread at a low rate, which means it could flare up at any time,” Frieden told health officials and lawmakers during a meeting in Washington last week.

“We have to get to zero and then stay at zero and that's going to require monitoring, surveillance.”

New Ebola cases are on the decline

Doctors Without Borders, known by its French acronym MSF, warned in a briefing paper last month that “the hotspots are constantly moving,” and called for flexibility in the international aid response to the crisis.

“Striving to deliver on what was promised two months ago, many international actors seem unable to adapt to the rapidly-changing situation in Liberia,” MSF warned.

“The result of this is that resources are being allocated to activities that are no longer appropriate to the situation.”

For example in Liberia, some Ebola treatment centers — including ones newly built by US troops — lie empty of patients, while other areas of the country are still in dire need of help.

The WHO, in a series of reports marking one year into the West African Ebola epidemic, said that the successes of Nigeria, Senegal and Mali showed that the disease can be stopped in its tracks if a country is properly prepared.

The countries were helped by top-level government support, high-quality laboratories facilitating the rapid detection of cases, and community cooperation, among other factors.

“The three countries shared a high level of vigilance that led to the rapid detection of an imported case and the rapid introduction of classical control measures,” the report said.

MSF cites the positive example of Liberia’s Lofa county, where the local community has been engaged in combating Ebola and the full range of response efforts carried out. As a result, there hasn’t been a new case since Oct. 30.

As a disease that lives in animals — most likely fruit bats — and can spread to humans in close contact, future Ebola outbreaks remain a risk. The current epidemic has led to a push to develop vaccines, some of which are now undergoing clinical trials.

A Guinean student gets her temperature checked Monday as he enters at the Oumou Diaby school in the Ratoma area of Conakry, Guinea.

In Guinea, where the outbreak started in December 2013, improvements in the country’s situation led the government to reopen schools and universities on Monday, closed for the past five months for fear of spreading the disease.

Staff at schools in the capital, Conakry, took the temperature of arriving pupils, barring anyone with a fever.

But fear of Ebola, and stigma against the disease, remains hard to break: despite reassurances, many parents were simply still too frightened to send their children back to class.