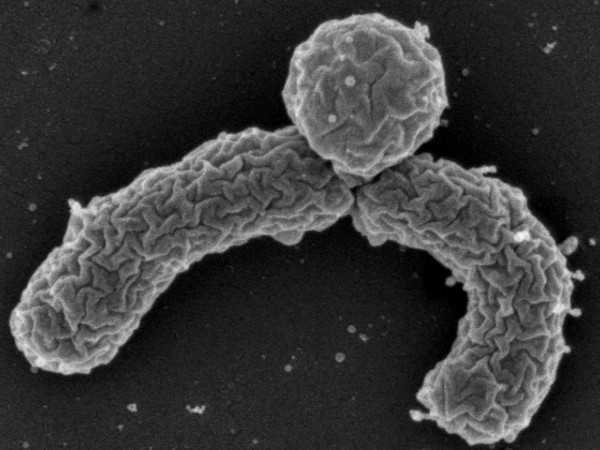 A newly discovered soil bacterium, Eleftheria terrae, is able to make teixobactin, a new antibiotic that can kill a range of disease-causing bacteria.

Scientists have discovered a powerful new antibiotic that kills an array of drug-resistant bacteria, a much-needed breakthrough that could lead to a whole new class of disease-fighting treatments.

Widespread use — and misuse — of antibiotics has led to an alarming rise in the number and potency of disease-causing bacteria. Pathogens are developing resistance to antibiotics faster than pharmaceutical companies can bring new ones to market, leading many health experts to predict a quickly-approaching public health crisis.

Most of the antibiotics in use today are a result of the battle among microorganisms that occurs all the time in nature: Antibiotics kill pathogens in people because the bacteria from which they are derived have evolved to gain advantage over other bacteria.

But only about 1 percent of microbial substances from soil bacteria and fungi can be successfully grown in a lab and turned into a compound capable of treating disease. The remaining 99 percent remain uncultured and unused, their secrets hidden from medical science — until now.

The discovery was reported in the journal Nature by a team of scientists led by Kim Lewis, director of the Antimicrobial Discovery Center at Northeastern University at Boston, and NovoBiotic Pharmaceuticals, a startup company in Cambridge, Massachusetts.

Lewis says it became obvious to him and his collaborator, Slava Epstein, that “tinkering with growth media in our petri dishes” was the wrong approach, because it simply hasn't worked for so many bacteria.

“Instead of trying to figure out the ideal conditions for each and every one of the millions of organisms out there in the environment, to allow them to grow in the lab, we simply grow them in their natural environment where they already have the conditions they need for growth,” he says.

They "came up with a simple gadget" called an iChip that is a kind of diffusion chamber in which a soil sample is sandwiched between two semi-permeable membranes glued onto an 'O' ring. The contraption then goes back into the soil.

“Now everything diffuses through that chamber and bacteria get their nutrients and growth factors from the natural environment — and they grow. Essentially we trick them; they don't know that something happened to them,” Lewis explains.

Once a colony is formed, there is a high probability that the microbe will become domesticated and grow in the lab. Lewis and his team grew 10,000 different microbes this way and found one that was exceptional.

“From that collection of strains, we found a number of bacteria that produced antibiotics, but one was particularly interesting,” Lewis explains. “It was only distantly related to known organisms, it was unusual in a number of features and it was making a potent compound.”

And there was one very striking feature of the compound that they did not expect: they could not find any resistance to it in the pathogens they tested it against. That is an increasingly rare and exciting find.

Lewis believes the new antibiotic, called teixobactin, could be effective for decades because it destroys pathogens by causing their cell walls to break down. Most antibiotics target bacteria’s proteins and genes, which can allow the bacteria to mutate and develop resistance to the attack.

Teixobactin targets many drug-resistant bacteria, including those that cause the “superbug” MRSA; strep pneumonia, a common bacteria that causes a number of serious illnesses; and the bacteria that causes infective endocarditis, which Lewis says has very limited therapeutic options. Teixobactin is also effective against tuberculosis, which now has multiple strains that are resistant to all available antibiotics.

Lewis points out that so far this has been a modest effort, which makes its success all the more significant. “The culture collection that NovoBiotic put together is 50,000 isolates,” he says. “From that number we discovered 25 new antimicrobial compounds. Teixobactin is probably the most interesting one.”

“If from this modest effort [we] were able to derive 25 compounds of chemical novelty, that is an indication that a considerably larger of antibiotics will be discovered from uncultured bacteria,” Lewis says.

While they have only been able to cure infections in mice, “that’s not a bad predictor of efficacy in humans,” Lewis notes. “Of course, we have to do a considerable number of additional tests in other animal models — toxicity, formulation and so forth. We're about two years away from human clinical trials and those trials take about three years.” mmm