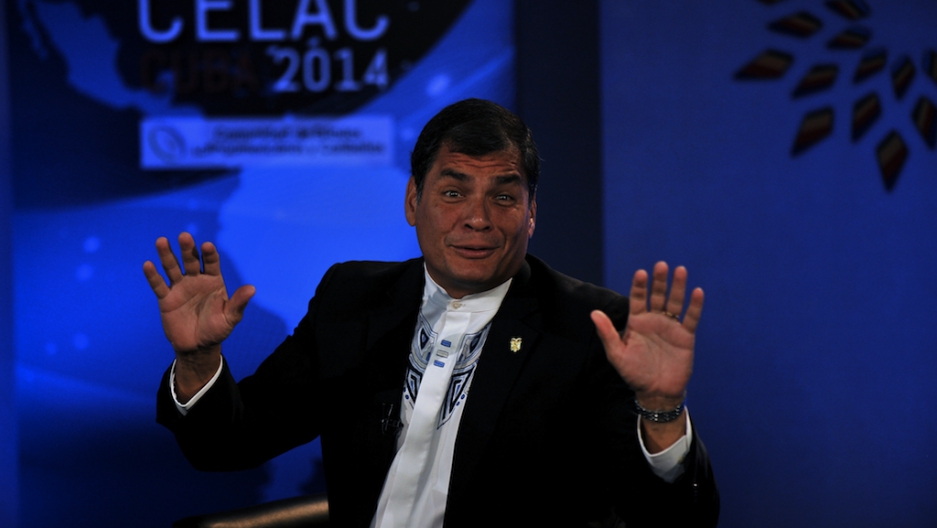 LIMA, Peru — You might think that using United States laws to shut up social media opponents would be the last thing Rafael Correa would do.

A vocal adversary of Washington, Ecuador’s leftist president has also made a name for sheltering WikiLeaks’ Julian Assange in his country’s London embassy, and briefly offering asylum to US intelligence uber-leaker Edward Snowden.

Even more unexpected is the justification being given time and again: the supposed violation of the Digital Millennium Copyright Act (DMCA), passed by US Congress in 1998.

The law, intended to combat online piracy, holds internet companies liable for copyright violations they host, however unwittingly. It also establishes a fast track “notice and takedown” process for rights holders to inform social networks and search engines when copyright is being breached.

As a result, those websites now automatically remove the content, and even close down repeat violators’ accounts. In practice, democracy activists say, that’s allowing a repressive government to shut down many of its online critics.

Account users can appeal, and often have their posts reinstated. But the process typically takes a couple of weeks — an eon for journalists, bloggers, cartoonists or anyone else wishing to respond to fast-moving news events.

“This is an attempt to control anything that is uncomfortable for the government. Correa can’t tolerate criticism,” said Pocho Alvarez, a filmmaker. His short video, “Acoso a Intag” ("Harassment of Intag"), showing the government’s allegedly heavy-handed treatment of a village opposed to a planned copper mine, was temporarily removed by YouTube.

“Correa likes to sell himself as a progressive, a leftist, but his behavior could hardly be more reactionary,” he added.

Alvarez’s supposed copyright breach was the inclusion of a few seconds of a televised Correa speech in his work. The DMCA actually allows that kind of “fair use” of even copyrighted information as part of the cut-and-thrust of debate in any free society.

And as Cesar Ricaurte, director of Fundamedios, a Quito-based media freedom nonprofit, emphasizes: “In any democratic country in the world, the president’s speeches are public material and can be used in commentary.”

Carlos Jijon, editor of Guayaquil news website La Republica, which was taken down by its US server for several hours after publishing a photo of a check allegedly proving official corruption, said the bogus copyright complaints were an attempt to intimidate critical voices.

In his case, the complaint alleged that the rights to the photo belonged to a police officer, when really it belonged to another Ecuadorean newspaper, according to Fundamedios.

Jijon added that Correa had singled him out in televised speeches as an example of supposedly dishonest journalists trying to confuse the Ecuadorean people. “He attacks us in very personal ways and there is no right of reply,” Jijon said of the president.

The copyright complaints against Ecuadorean web users are being filed by a secretive Spanish firm, Ares Rights. That’s according to interviews with several of the social media users and takedown notices from YouTube and Twitter viewed by GlobalPost that cite Ares Rights as the complainant.

In one case, the complaint also named the copyright holder as President Correa's Alianza Pais party.

Ares Rights has a single-page website with a brief video offering services to monitor web content and take down pirated material that breaches clients’ copyright.

The company did not respond to GlobalPost’s tweets requesting comment, or to an email sent to an address the company filed in one of its copyright complaints. A Spanish phone number given in that same complaint was out of service.

In Ecuador, the government has been largely silent about Ares Rights, other than the former head of state-run Ecuador TV denying it had hired the company.

But many in the South American nation aren’t buying that.

“It is really striking that no other official or member of the government or Alianza Pais has publicly come out and said there is no connection with Ares Rights,” said Diana Amores, a 34-year-old Quito-based English teacher and translator whose Twitter account, often poking fun at the government, was blocked twice last year.

The US-based Electronic Frontier Foundation has also called on the Correa administration to come clean about its relationship with the company.

“If the Ecuadorean government really is not involved with Ares Rights, then it should denounce the firm and demand that they stop sending DMCA notices in the government’s name,” it urged. “Bogus copyright complaints like these threaten free expression on the internet.”

GlobalPost attempted to get a response from the Ecuadorean government.

The Communications Ministry referred us to the state-run Ecuadorean Institute of Intellectual Property. In an email, it said it would respond to GlobalPost’s request for an interview but failed to do so before publication.

Although Fundamedios has documented several complaints for supposed copyright breaches against Ecuadorean government critics filed by Ares Rights, it is unclear how many others have been silenced by the company.

“It is not an easy process to get your account reinstated. It is burdensome,” Amores said. “I wonder how many other people have received similar copyright notices but have not fought it or gone public?”