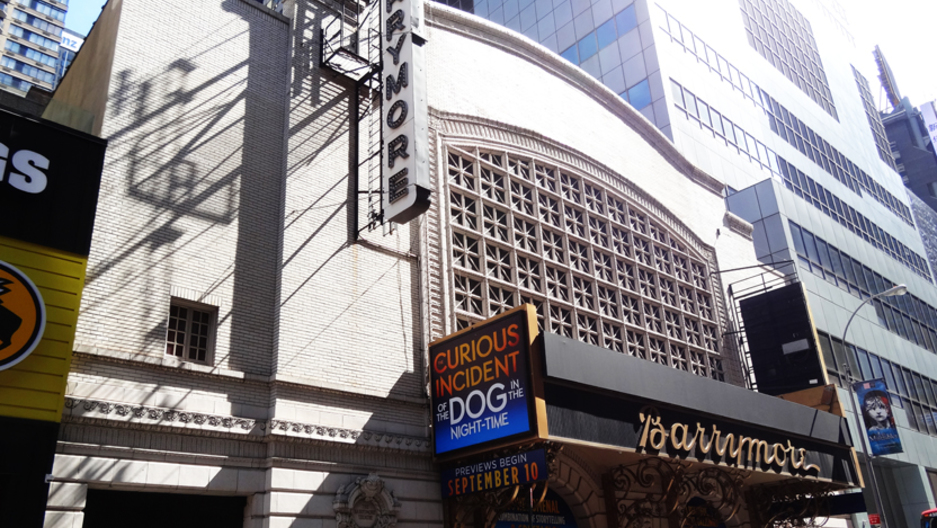 The marquee at the Ethel Barrymore Theater in New York, where "The Curious Incident of the Dog in the Night-Time" is playing.

When you go to a Broadway show, you expect to meet strong characters. But even the most seasoned theater mavens will admit they have never met a character quite like Christopher Boone.

Christopher is a 15-year-old math wizard and space junkie. He loves his pet rat; he despises the color yellow; he will scream when touched, and he's dead set on solving a murder. He's the unlikely hero of the hit Broadway play "The Curious Incident of the Dog in the Night-Time,” based on the book by the same name.

And while it's never explicitly stated, Christopher is on the autism spectrum.

PRI’s Ira Flatow spoke about the show with actor Alex Sharpe, who plays Christopher, and with Michael Rosen, vice president of communications at Autism Speaks, the international autism research and advocacy organization. These are excerpts from the conversation.

Flatow: Alex, tell us what math and science do for the character of Christopher.

Sharpe: Numbers feel like almost a religion for him. It's a measuring system. He finds the world very overwhelming. He finds dealing with people quite a challenge. Numbers give him something that he can believe in, something that's always the same and is reliable, and something by which he can measure everything that he does.

Your facial expressions, your actions and your body language on stage are key to understanding the character. How did you research that or figure out what you were going to do?

Well, it's not actually specified in the novel or the play that Christopher is on the spectrum, but the symptoms certainly strongly indicate that. So I did a ton of research on autism in lots of different forms, and took it all in as helpful information for building this unique human. I went to some different schools and hung out with kids on the spectrum.

You read a book called "The Reason I Jump.” Why is that book important?

You can read lots of books that give you the facts on autism and how it affects somebody moving through the world. [Or] if you go into school, it's very helpful and you're observing young people on the spectrum. But you're observing someone from the outside and watching the exterior result of how they are and how they move through space.

"The Reason I Jump" is written by a young boy on the spectrum who is actually non-verbal, but has found a way through writing, through a letter board that his mother created, to express himself, and to talk experientially about how the world is for him — from the inside out. It's the closest you can get, I think, to the inner dialogue of someone on the spectrum.

Michael Rosen, you have a son on the spectrum. What was it like for you to watch the show?

Rosen: We were a little skeptical when we first heard that they were going to bring “Curious Incident” to an autism-friendly audience, because it’s a hard enough show for people to watch who aren't on the spectrum. It has mature content, it's a sensory explosion — but they just did a spectacular job.

Our family is used to taking our kids to see something like Spiderman or a Disney show like Lion King, [but] this was really a breakthrough performance for our families to be able to see this show.

What do you mean by autism-friendly performance, Michael?

What they'll do is they'll dim the lights a certain amount, because our kids on the spectrum are a little sensitive to light. They'll play with the sound a little bit, take down the overload of the sound. Some scenes that are very powerful, so they'll tone [the acting] down a little bit.

It’s a learning experience for the actors as well, because this isn't your usual audience. This isn't a crowd that will just sit there and watch like your normal crowd. Our people are used to making sounds and noises and expressing themselves very verbally in loud ways, so the actors have to be prepared for that as well.

Alex, was it a different feeling being onstage?

Definitely. I remember the first moment I come out: There are these flashes, and the dead dog is there and the first line in the play uses quite explicit language. There was an explosion of noise and reaction to that from the audience and I [realized] how much concentration and focus it was going to take to get through it.

It was certainly challenging at times, but it was also the most memorable and meaningful show I'd ever done. To be able to share this character specifically with that audience was just incredible, and I think they were the most appreciative and awesome audience.

Michael Rosen, did the families of the folks in the audience like the performance?

Our families came back so incredibly moved. They don't know that they're going to be able experience an afternoon at the theater like this. They don't know what to expect; they’re nervous when they go into situations that other families take for granted. And they were just blown away by their kids being able to sit through this and get so much out of it.

Our kids may not be obsessed with math, but it could be Disney or Star Wars or something else — so they get that, the obsession. At the end of the show, the actors answer questions from our audience. It’s just an unforgettable experience, not just for the kids on the spectrum and the adults on the spectrums, but for their parents as well.

"The Curious Incident of the Dog in the Night-Time,” is running in New York at the Ethel Barrymore Theater.