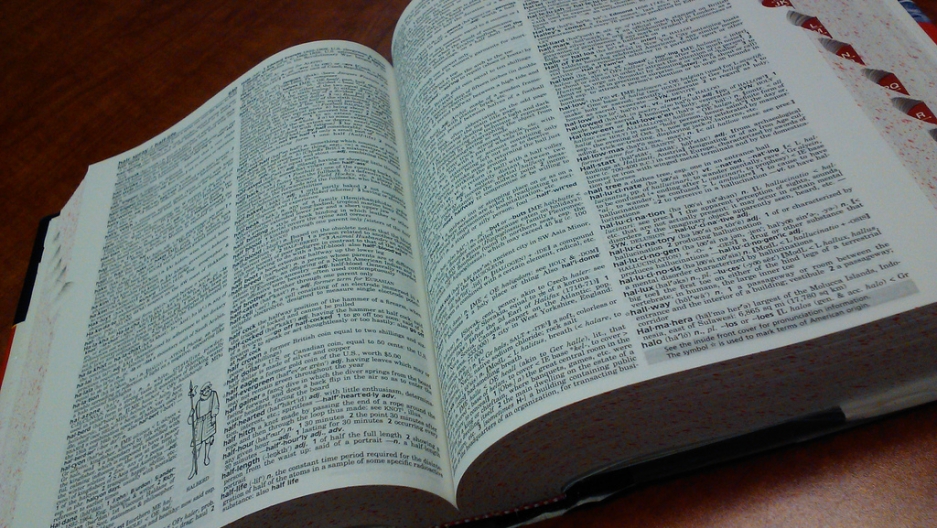 A copy of the Merriam-Webster English dictionary.

What is the dictionary definition of the word "dictionary"?

If you flip open a copy of Merriam-Webster, you'll find several entries:

But those definitions will soon be due for an update. More than 50 years after it was published, Webster’s Third New International Dictionary, Unabridged — the book we all think of when we think if "Webster's dictionary" — is getting a major update.

When the editing is through, Merriam-Webster's will no longer be a reference book. Its database will live entirely online.

So why is this a big deal? “Merriam-Webster is the last American dictionary company left,” says Stefan Fatsis, a journalist and author of "Word Freak: Heartbreak, Triumph, Genius, and Obsession in the World of Competitive Scrabble Players." “Random House, American Heritage — all of the big dictionary names that we’re familiar with — they’ve all just allowed their staffs to wither.”

American Heritage only has four lexicographers working full time; Merriam-Webster still employs about 40 full-time editorial staff members. “They’re the last flag carriers for an industry that has been in decline,” Fatsis says.

Of course, he points out, dictionaries have been morphing and changing from the very start. In 1879, the first editor of the Oxford English Dictionary, James Murray, appealed to the English-speaking and English-reading public to submit words and definitions for his planned dictionary.

“What that demonstrates is that lexicography — the study of words and the creation of definitions defining words — is something that is imbued in the culture and the public,” says Fatsis. “We’re all curious about where words come from and what they mean."

It's only in the last two centuries or so that the act of defining definitions — lexicography — has become an actual profession. Noah Webster, the first American lexicographer, published his first dictionary in 1806. In 1828, Webster released another that was considered the best dictionary since Samuel Johnson's “Dictionary of the English Language," from 1755.

“[Webster’s] was sort of the American dictionary, and that’s sort of where this tradition and this scholarship stems from,” Fatsis days. “That’s why Merriam-Webster is at the forefront of trying to figure out lexicography in the digital age.”

Fatsis says executives at Merriam-Webster now view themselves as a digital content publisher. The company generates more revenue from online advertising and online subscriptions to the unabridged dictionary than they do from selling the actual books.

“[Merriam-Webster President John] Morse said to me that a dictionary is a database. It’s not a book anymore,” Fatsis says. “He’s comfortable with that. There isn’t so much nostalgia inside Merriam-Webster for the idea of the print book.”

And it's "an incredibly vibrant and exciting time” for the study of words, because lexicographers have more freedom to practice their craft online than they do in print. Yet the Internet also presents its own set of new and unique challenges.

Fatsis says that dictionary companies are now competing with digital behemoths like Google as well as cultural shifts in behavior, since many people simply use an online search to find words they’re looking to define.

Some lexicographers believe that society no longer needs traditional defining bodies like Merriam-Webster. Erin McKean, founder of the online dictionary Wordnik and a former lexicographer at OED, told Fatsis that dictionaries should take a page from the old days and rely more heavily on crowdsourcing the public.

“My job is not to decide what a word is. That is your job,” she told an audience at a TED Talk in November. “Everybody who speaks English decides together what’s a word and what’s not a word.”

Though some lexicographers like McKean think crowdsourcing is the future, Fatsis says that individuals do still want trusted resources like Merriam-Webster.

“People do want that authority,” he says. “There’s this monolithic idea of ‘the dictionary,’ even though there are lots of different dictionaries. The trick for publishers like Merriam is how do they find the sweet spot between Noah Webster ... and the lexicographic free-for-all of something like Urban Dictionary?”