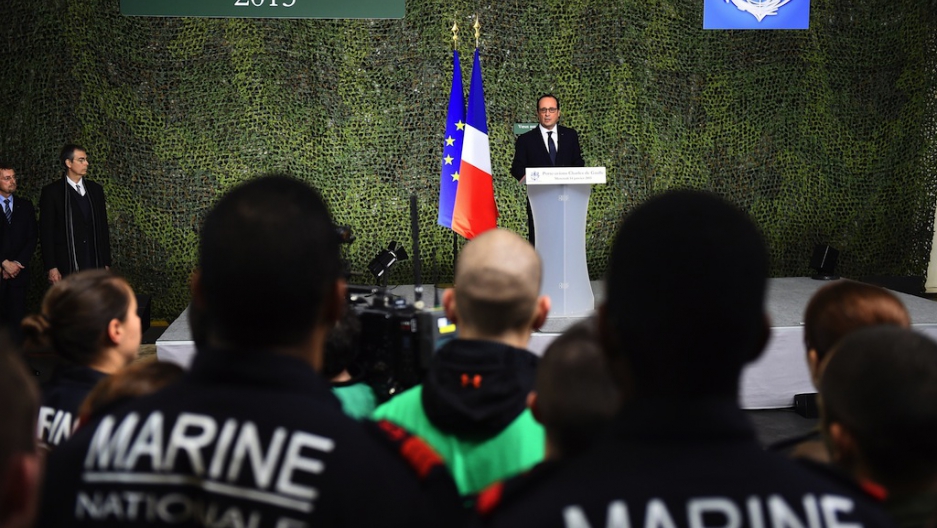 LISBON, Portugal — As horror swept across France last week, the terror attacks that left 17 dead looked sure to give a boost to Marine Le Pen, whose anti-immigration National Front party has long played on fears of extremism among the country's Muslim communities.

Yet as France rallied in response to the killings, Le Pen has slipped out of the headlines.

In fact, her party has been marginalized amid the unity demonstrated by citizens of all colors and faiths at the marches that drew almost 4 million to the streets of Paris and other French cities last weekend.

Commentators watching France's biggest street gatherings since the 1944 liberation from Nazi occupation believe the country was reaffirming traditional values of tolerance and fraternity, which have eroded over recent years of economic decline and political division.

"Something unique happened on Sunday on the streets of France," wrote Laurent Joffrin, editor of the left-leaning daily Liberation. "The country ... rose up in a great civic impulse to reject violence, obscurantism, communal division. The Republic took a blow to the heart. Two days later the Republic was standing tall."

'Paris is Charlie' was projected onto the iconic Arc de Triomphe in Paris on Jan. 9, 2015, two days after an attack at the offices of Charlie Hebdo killed 12 people. By the week's end 17 victims and three terror suspects had been killed in several crimes.

Le Pen was not at the Paris march. As President Francois Hollande pulled together political and religious leaders behind an appeal for national unity, he pointedly refused to invite National Front leaders to the rally.

Instead she led a counter-demonstration of around 1,000 supporters in a small southern town that has been run by a National Front mayor since elections last year.

"She has not grasped the sentiment that is taking hold of the nation, she did not expect this human tide," said Elizabeth Martichoux, chief political correspondent with the broadcaster RTL. "She does not understand that the French don't want parties exchanging accusations and ripping each other apart. The French want to rally together, to rally everybody except her."

Showing remarkable disregard for the zeitgeist, Le Pen's father, the National Front's founder and figurehead Jean-Marie Le Pen, made a point of mocking the marchers.

"All these people marching with the 'Je suis Charlie' signs, what they are in fact are 'charlots' [clowns] who are responsible for France falling into decadence," he told reporters Saturday, before Sunday’s record-setting rally.

A surprise twist for voter opinion

Rather than triggering a swing to the Front, opinion polls are showing the murderous attacks against a kosher grocery and the Charlie Hebdo satirical newspaper have boosted support for the much-maligned Hollande.

Seventy-nine percent believe the president and his Prime Minister Manuel Valls have been "up to the task" of handling the attacks, according to a poll published Wednesday in the daily Le Parisien.

By late last year, Hollande saw his approval ratings drop to record lows of below 20 percent as he failed to make good on promises to tackle economic stagnation and rising unemployment. Since the attacks, his rating is up eight points to 29 percent, Le Parisien said.

"French people of the Muslim faith have the same rights and the same duties as all citizens. Anti-Muslim actions, like anti-Semitic actions, will be severely punished."

Hollande was praised for his steady hand during the attacks, authorizing raids by elite gendarme units that killed the alleged terrorists without further deaths among hostages.

Since then, he's ordered speedy action to calm fears of insecurity — posting thousands of extra police and soldiers onto the streets and ordering an aircraft carrier to the Middle East to intensify French participation in bombing raids against Islamic radicals.

At the same time he has appealed for calm and stressed the importance of national unity, which he has repeatedly described as France's "best weapon" against terrorism.

On Thursday he visited Paris' largest Arab cultural center to express solidarity with Muslims, who are estimated to make up around 8 percent of France's population. In the face of scattered attacks against mosques since the Paris attacks, he offered assurances that Islamophobia would not be tolerated.

"French people of the Muslim faith have the same rights and the same duties as all citizens. They must be protected," he said. "Anti-Muslim actions, like anti-Semitic actions, will be severely punished."

The question facing France now is whether the spirit of national unity shown on the streets will last and remain in favor of Hollande and other mainstream politicians who had seen their support eroded by the rise of Le Pen.

In France's elections to the European Parliament last May the National Front won more seats than any other party. It was expected to do well again in local elections across the country in March.

Polls last year showed Le Pen could beat Hollande through to a second-round runoff in the next presidential vote scheduled for 2017.

The danger for Hollande is that as memories of last week's horror fade, voters’ thoughts will return to the problems that led to widespread disillusionment with the political establishment.

Le Pen's nationalist solutions have exploited worries over the stagnant economy — and fears that the French social model is under threat from globalization and Germany's oversized influence in the European Union, as well as by mass immigration and the growing influence of Islamism.

"We have to look into much deeper trends," says Alexandra de Hoop Scheffer, Paris office director of the German Marshall Fund of the United States, a think tank. "It's striking to see how France is changing, French society has become much more skeptical and fearful vis-a-vis the immigration and in particular toward the Muslim immigrants."

The danger for Hollande is that as memories of last week's horror fade, voters’ thoughts will return to the problems that led to widespread disillusionment.

She sees similar dangers in other European nations. German cities have seen mass demonstrations against "Islamization" in recent weeks and parties stridently hostile to Muslim immigration have been scoring well in countries from Italy to Sweden.

In France, former President Nicolas Sarkozy, now leader of the conservative opposition, returned to the presidential palace for a symbolic meeting with Hollande last week for the first time since they faced off in 2012 elections. In another gesture of unity, usually fractious lawmakers in the National Assembly stood together Tuesday to sing “La Marseillaise” for the first time since the end of World War I.

Hollande's Socialists have proposed a cross-party pact to quickly draw up new security measures, but many fear France's political and social divisions will reopen as the country returns to politics-as-usual.

"In a context of economic uncertainty, doubts over the European project, disillusionment with the political establishment, all of these trends make the notion of national unity much more difficult to really implement," de Hoop Scheffer told GlobalPost.

The deep anxieties running through the French public have been reflected in the nation's bookstores.

In the weeks before the attacks the country had been in the grip of an impassioned debate over two best-selling books.

"The French Suicide" by right-wing journalist Eric Zemmour tells how the country's way of life was being destroyed by the likes of US-style consumerism, gay rights and immigration. Equally controversial, "Submission," by leading novelist Michel Houellebecq, portrays a near-future France ruled by a Muslim president who cuts unemployment by pushing women out of the workforce and into polygamous marriages.

Since the attacks they've been challenged at the top of best-seller lists by cartoon collections of the slain Charlie Hebdo team and an 18th century philosophical tome — Voltaire's "Thesis on Tolerance."

Optimists are hoping last week’s events could be a turning point for France's politics as well as its reading habits.