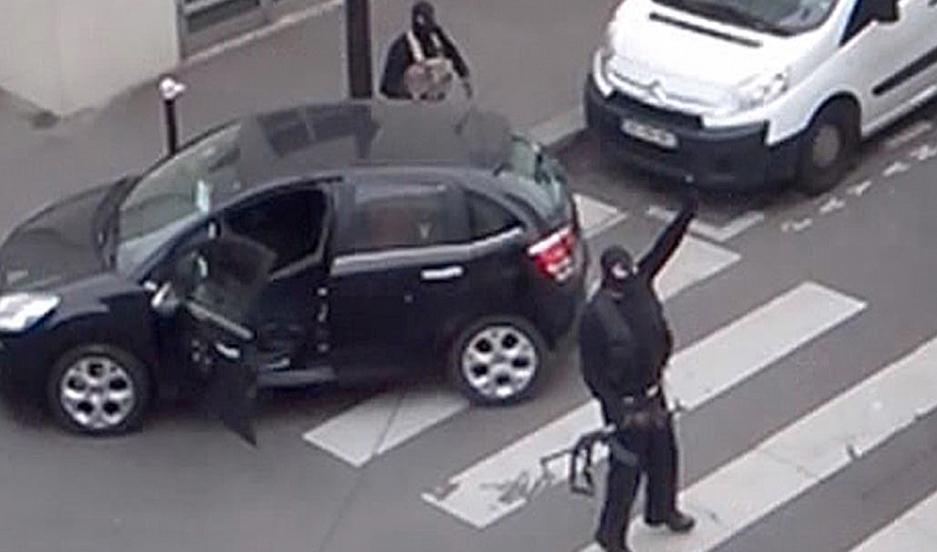 The Kouachi brothers gesture after shooting up the Charlie Hebdo office in Paris last week.

Clues have started emerging as to where the perpetrators of the attacks in Paris last week obtained their military grade assault rifles. The clues are pointing to an illegal arms market in Brussels, in neighboring Belgium.

There are conflicting reports about the detention of arms dealers in Belgium. One report says an arms dealer was simply arrested. Another says a dealer came forward and surrendered when he realized his client was connected with terrorism. “They could be one and the same person,” says the BBC’s security correspondent, Frank Gardner. “We just don’t know yet.”

“Clearly,” he adds, “somebody who has seen Coulibaly’s name does not want to get done for terrorism, when he is involved in criminality, because there’s going to be a huge difference in the penalties. If it’s true, then he’s chosen the lesser crime, as it were.”

Gardner says there is a thriving black market in Belgium, and elsewhere, for military weapons.

“The collapse of Yugoslavia in the 1990s — which resulted in those wars in Croatia and Bosnia and later in Kosovo — has meant that there is a huge surplus of locally produced Balkan weapons, powerful weapons, that take 30-round magazines, that are falling into the wrong hands.”

Gardner says “there is a great mass of these weapons washing around, sadly. ... That’s a real worry.”

“The really disturbing thing is how easily, and how relatively cheaply, this attack was enabled,” says Gardner. He says the whole arsenal appears to have been acquired for less than $10,000.

The nations of the European Union are known for having extremely tough gun laws. But Gardner says “some would argue that it’s precisely because of the stringent firearms laws that people go straight to the underworld, they go to the criminal, illegal, arms market.”

Gardner quoted the EU anti-terrorism coordinator, Gilles de Kerchove, as saying Wednesday that “if you know where to go, it’s relatively easy to get hold of [military-grade weapons] in Europe.” Gardner says reports indicate Coulibaly acquired the weapons as recently as December, "just in the last few weeks.”

Acquiring weapons is one thing, but using them is another. “In terms of military training,” says Gardner, “these attacks were relatively professionally carried out — certainly the raid on the Charlie Hebdo offices. Their fire and maneuver was quite professional.”

“It appears that at least one of them was trained in Yemen by al-Qaeda in the Arabian Peninsula (AQAP),” says Gardner. AQAP claimed credit for the attack on Wednesday.

But Gardner notes that some things don’t add up here. “Said Kouachi is believed to have visited Yemen in 2011 and left the following year. Why would he wait two-and-a-half years to do the attack? It’s not that sophisticated. Did he become part of a sleeper cell, and then activated? It’s possible, but then where is the suicide video that is normally issued in cases like this.”

The weapons seen in various images of the attackers include a variant of the famous AK47; a Czech-made sub-machine gun called a Scorpion; several Russian-designed Tokarev TT pistols and a grenade or rocket launcher — probably the Yugoslav M80 Zolja. The attackers also carried Molotov cocktails and at least one regular grenade, which was set as a booby trap on the person of one of the attackers before he was shot and killed by police.