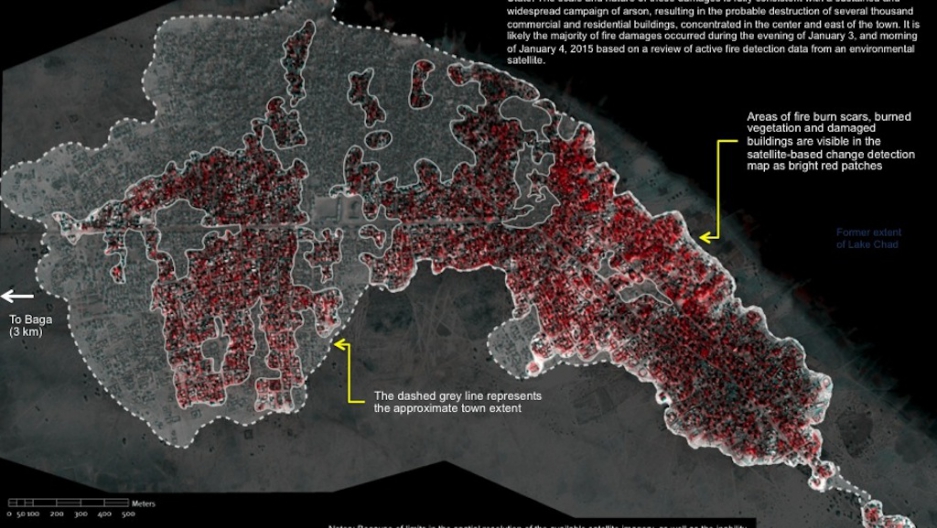 Both Amnesty International and Human Rights Watch have analyzed images showing towns attacked by Boko Haram in the days after it captured the Baga military base on Jan. 3.

The satellite pictures match accounts of residents who fled the town of Baga and nearby Doron Baga (also known as Doro Gowon), describing horrific destruction and indiscriminate killing at the hands of the insurgents.

The group claims it’s fighting to set up an “Islamic caliphate” in Nigeria.

Death toll estimates have ranged from hundreds to as many as 2,000 people killed, according to one account by a local official. The Nigerian military, which no longer controls the area, claims that 150 people were killed.

But according to Amnesty, satellite images combined with survivors' stories suggest that the final death toll could be far higher than the military's figure.

Images taken Jan. 2 and 7 show that the attacks left more than 3,700 structures damaged or destroyed, the rights group said. This includes 620 structures affected in Baga, and more than 3,100 in Doron Baga.

“These detailed images show devastation of catastrophic proportions in two towns, one of which was almost wiped off the map in the space of four days,” Daniel Eyre, an Amnesty researcher, said in a statement.

“Of all Boko Haram assaults analysed by Amnesty International, this is the largest and most destructive yet. It represents a deliberate attack on civilians whose homes, clinics and schools are now burnt out ruins.”

Wooden fishing boats, visible along the Lake Chad shoreline in images from Jan. 2, can no longer be seen in the later photos, matching with eyewitness testimony that residents fled the attacks by boat, the Amnesty statement said.

“Up until now, the isolation of Baga combined with the fact that Boko Haram remains in control of the area has meant that it has been very difficult to verify what happened there," Eyre said. "Residents have not been able to return to bury the dead, let alone count their number. But through these satellite images combined with graphic testimonies a picture of what is likely to be Boko Haram’s deadliest attack ever is becoming clearer.”

Mausi Segun, a researcher for the group, wrote that the images "provide direct evidence of extensive areas of fire-related damages to local buildings and trees, consistent with a systematic campaign of arson directed against the civilian population in the area."

"In time, we hope to provide more accurate figures on the number of those killed in the attacks and information about them. But for now, credibly used satellite imagery is the closest we will get to the truth," Segun wrote.