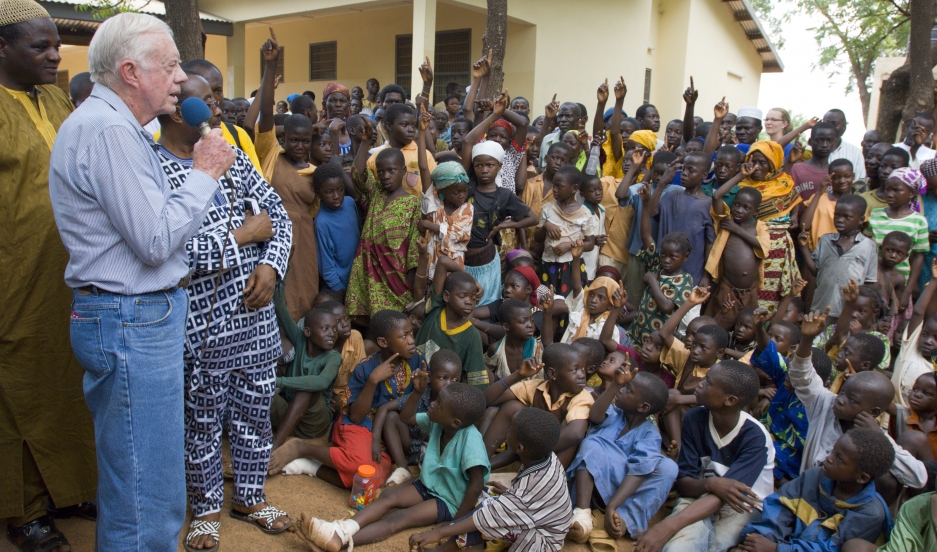 To date, the scientific community has only successfully eradicated one human disease: Smallpox. But President Carter and leading scientists on his team believe other diseases can be sent down the same path, eliminating unnecessary pain and suffering among some of the world's poorest and most vulnerable populations.

Speaking to John Hockenberry at an event at the American Museum of Natural History, Carter explained the success of The Carter Center and the hurdles left to be overcome. The event took place alongside a new exhibition, "Countdown to Zero: Defeating Disease" on view from January 13 to July 12, 2015.

“There is one place on Earth where we analyze every human illness constantly to see which ones can be theoretically eliminated or eradicated,” Carter said. “And that’s at the International Task Force for Disease Eradication located at The Carter Center.”

In the 1980s, Carter’s organization started to examine Guinea worm, which much of his discussion at the Natural History Museum focused on. Guinea worm is an infection caused by a parasite and is spread by drinking contaminated water. It can cause debilitating and painful infections.

“The disease only takes place in isolated villages, mainly in arid areas, where people don’t have a running stream, a well, or anything else to get water from,” Carter explained. “It was in three countries in Asia and 17 countries across South Saharan Africa, [impacting] 23,600 villages. We’ve been to all of the villages now.”

When Carter’s organization first started working to fight Guinea worm in 1986, there were more than 3.5 million cases per year. That number currently sits around 126 — Carter says he personally knows each of the remaining Guinea worm victims and what village they come from.

With the cases dropping, Carter is on the verge of declaring that another world disease has been eradicated.

“One of the most difficult problems to overcome when we began with Guinea worm in the middle ‘80s was a lack of communication and understanding,” Carter said. “The people that have Guinea worm live in the most isolated and poverty-stricken villages in the world. They were totally illiterate. And they didn’t have any knowledge of, or much less access to, radio or television. So how do you teach them?”

Carter says his organization needed multiple translators to get the word out, and ultimately utilized visual imagery, like cartoons, to explain the risks of Guinea worm. However, as technology has exploded and spread worldwide, the former world leader says it’s become much easier to transmit information in the most at-risk communities.

But modern warfare is the enemy of both technology and the battle against disease. More than a decade ago, during the Sudanese Civil War, Carter says he helped negotiate a six-month-long ceasefire in order to help eradicate Guinea worm.

“We had quantified the number of Guinea worm cases all over the world, and we found that South Sudan had a lot of them,” he says. “We couldn’t get in there to treat the people, or even to analyze village to village. I went over there and spent a good many weeks negotiating with the leader of South Sudan’s military force, Johnny Garang, and President [Omar al-Bashir], who’s still there in northern Sudan.”

Carter says despite their differences, both John Granag, the former Sudanese vice president and rebel leader of the Sudan People's Liberation Army, and al-Bashir, did have a shared goal.

He continues: “I couldn’t get them to agree on a time. Finally, in 1995, they did agree to have a ceasefire. If you go there now and say, ‘How about that ceasefire in 1995?’ They’ll say, ‘Oh, the Guinea worm ceasefire.’ Everyone knows it was just for Guinea worm. We now have zero cases in Sudan, and just a very few cases in South Sudan because of that ceasefire.”

In so many of his travels around the world, President Carter has seen the heavy footprint the industrialized world leaves behind on the very places it is trying to help.

“One of the worst things that we’ve addressed is the depletion of registered nurses and doctors,” he says. “They get trained and go to medical schools, and they can get a lot more money if they come to the United States.”

After Liberia’s bloody civil war, Carter said there was only “one psychiatrist in the whole country” to deal with a large population suffering from Post-Traumatic Stress Disorder (PTSD). In response, The Carter Center trained 144 psychiatric nurses to aid the people of war-torn Liberia.

Though Guinea worm has almost been eradicated, Carter knows the world will always have to fight new pathogens, bacteria and viruses.

“The answer is no,” he said when asked if he can someday see a world free of all disease.