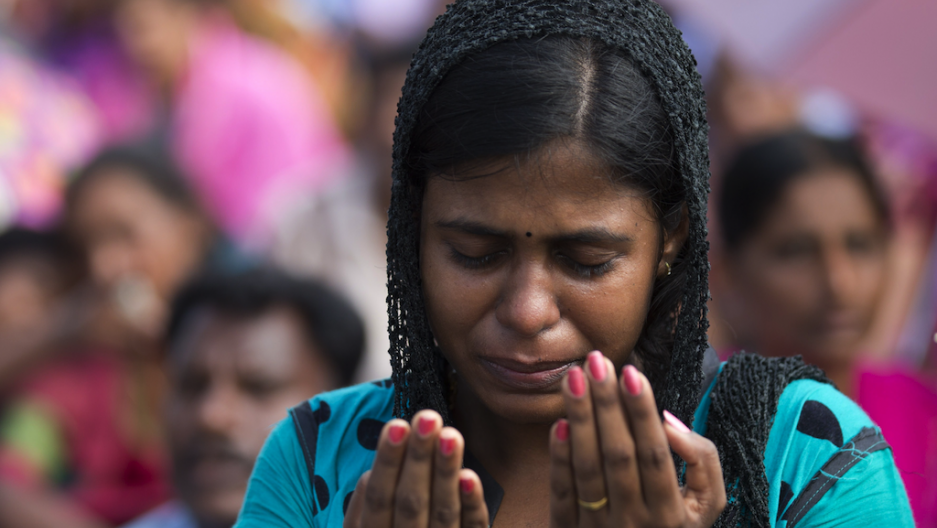 Sri Lankan Catholics attend a ceremony for St. Joseph Vaz with Pope Francis in Madhu on January 14, 2015. Pope Francis urged respect for human rights as he began a two-nation Asia tour in a windswept Sri Lanka on January 13, bearing a message of peace and reconciliation after a decades-long civil war.
Credit: Alessandra Tarantino
Share

Pope Francis met with Buddhist, Hindu and Muslim leaders and those of other faiths in Sri Lanka this week, stressing a cornerstone theme of his papacy: “Men and women do not have to forsake their identity, whether ethnic or religious, in order to live in harmony with their brothers and sisters.”

The papal endorsement of religious pluralism in a country wounded by a generation-long civil war marks another step in the Vatican strategy of binding diplomacy and pastoral values, pushing for a rapprochement between North and South, developed and underdeveloped regions of the world.

Francis is restoring the image of the pope as a moral statesman on the world stage, a tradition that sank in the last years of John Paul II’s neurological illness which caused his retreat from active governing, then amid the stumbles by Benedict XVI on the clergy abuse crisis and corruption scandals in the Vatican Bank and Roman Curia.

On the first leg of the pope’s Asian trip, which also takes him to the predominantly Catholic Philippines, he spoke in a Buddhist-majority country where Christians account for only 7 percent of the population, underscoring “the inability to reconcile differences and disagreements, whether old or new, [that] has given rise to ethnic and religious tensions.”

The larger focus of Francis’s rhetoric, in Sri Lanka as in his many Vatican speeches and interviews, is on a reciprocity of values, a moral safety net to strengthen the fabric of humanity to reduce war and violence.

If his agenda seems idealistic to realpolitik advocates, Francis’s role in assisting the Obama administration’s move to restore diplomatic ties with Cuba dramatized his comfort with power, enhancing his stature as a global figure.

“His strategy is to reshape the image of the Vatican as a neutral power on the international scene,” Massimo Franco, the author of “The Vatican According to Francis,” told The GroundTruth Project from Rome.

“As an Argentinian coming from the ‘extreme West,’ this pontiff is not perceived as an extension of the old Cold War divide,” observed Franco, who also writes about diplomacy for Corriere della Sera, a major daily paper in Rome.

“This pope looks at the poor and peripheries as people to be included and integrated because it is right — and because, if you marginalize them, they are going to erode and destroy from within the societies of the well-off.”

The pope made a proactive move on Jan. 4 in naming 20 new cardinals from 14 countries, mostly far-flung dioceses off the traditional church map — in Ethiopia, Myanmar, Tonga, Haiti and Burkina Faso — broadening the geographic reach of the College of Cardinals. Fifteen of the churchmen to receive the red hat on Feb. 14 in Rome are under age 80, and are presumptive voters to choose the 78-year-old pope’s successor in the next conclave.

The logic of his selections aligns with Francis’s view of a church for the poor, empowering bishops in areas far from the media radar screen over vested officials in Rome.

“He wants to reshape the Cardinals’ College, giving voice and power to the peripheries,” said Franco. ”It’s the long wave of [the 2013] ‘anti-Italian’ conclave, in which European primacy was openly defeated.”

With much of the news media still focused on Paris, its beleaguered Jewish community and restive Muslims, the pope extended his theme of religious conflict resolution in Colombo, Sri Lanka late Tuesday, speaking in English for the first time on a foreign trip: "We must be clear and unequivocal in challenging our communities to live fully the tenets of peace and coexistence found in each religion, and to denounce acts of violence when they are committed."

In response, Sri Lankan Muslim leader Ash-Sheikh M.F.M. Fazil, spoke out against the murders in Paris of the Charlie Hebdo magazine staff, according to Joshua McElwee in National Catholic Reporter.

"I will fail in my duties if I do not mention the attack, the killings, that took place in France, in Pakistan," Fazil said. "Children were massacred and killed in the name of Islam.... Islam is used by these extremists and terrorists in harming and imposing corruption on this planet."

On December 22, the pope dressed down cardinals and religious members of the Roman Curia in a speech starkly out of character with a traditional Christmas message.

Francis denounced the“terrorism of gossip” and “pathology of power” to a gathering of religious figures who hold great power in the church he governs.

“Sometimes [officials] feel themselves ‘lords of the manor’ — superior to everyone and everything,” he added.

Francis’s tone stirred speculation about his capacity to reform a Roman Curia riven by infighting.

“Resistances are strong and widespread, “ according to Franco. “I dare say they’re even growing, although the Vatican old guard fears the popularity of the Pope and his unpredictability...The reform of the Curia is going forward very slowly.“

The countervailing media narrative of a “foreign policy pope” has strengthened Francis’s hand, according to a Western diplomat in Italy, who spoke to GroundTruth on background.

“He has excellent credentials in his Secretary of State, [Cardinal Pietro] Parolin,” said this source. “Parolin is a very adroit diplomat. He meshes the two roles, of priest and diplomat, quite well. That’s why Francis brought him back from Venezuela [as nuncio, or papal ambassador.] Even new diplomats say he has the humanity and simplicity of a parish priest, in the best sense, not a regal, pontificating cardinal. You’ve got a media star in the pope and a very solid secretary of state backing him.“

Parolin, an Italian who turns 60 on Jan. 17, served as a papal envoy to Nigeria, Mexico and Venezuela – three flash points of the Third World church, threatened by Islamic violence, the impact of drug cartels and political chaos, respectively.

Unlike Benedict’s Secretary of State, Cardinal Tarcisio Bertone, who speaks only Italian, Parolin is fluent in Spanish and English.

“When you rely on consecutive translations it’s difficult to maintain a thought flow because everything takes double the time,” the diplomatic source said. “Parolin and [US Secretary of State] John Kerry were two men in full fluid conversations in the planning on Cuba. These things make a difference.”

As Francis moves across the global map, a Jesuit scholar who knew him in the 1980s in Argentina, sees him in a political sense as a work-in-progress.

”When he was in charge of the Argentine Jesuits, he surrounded himself with his allies and rest of the [religious] province got angry. He mismanaged the politics terribly,” Rev. Art Liebscher, a specialist in Argentina and chair of the Santa Clara University Department of History told GroundTruth.

The future pope Father Jorge Mario Bergoglio was ousted from his position as provincial, or top superior in the Jesuit order in Argentina.

“Bergoglio learned along the way that he needed to form allies and be more open, that associations would lead him forward,” explained Fr. Liebscher, who lived in a community with him while doing research in Argentina.

“After he was appointed a bishop, and later cardinal, he developed skills at outreach and working with people, in response to the comedown he experienced as a Jesuit provincial.”

Many powerful figures experience serious defeat without grasping the lessons of self-rehabilitation.

As Francis battles with old-guard figures resistant to change at the Vatican, and among the more conservative bishops in certain countries, he has found ironic leverage by restoring the papacy as a diplomatic presence on the global stage.

As a religious figure with growing respect among heads of state, Francis is rewriting the script of expectations for a pope, much as John Paul II did in the waning years of the Cold War with his dramatic trips to Poland. So far, Francis has public opinion squarely behind him.

GroundTruth religion writer Jason Berry is the author of Render unto Rome: The Secret Life of Money in the Catholic Church.