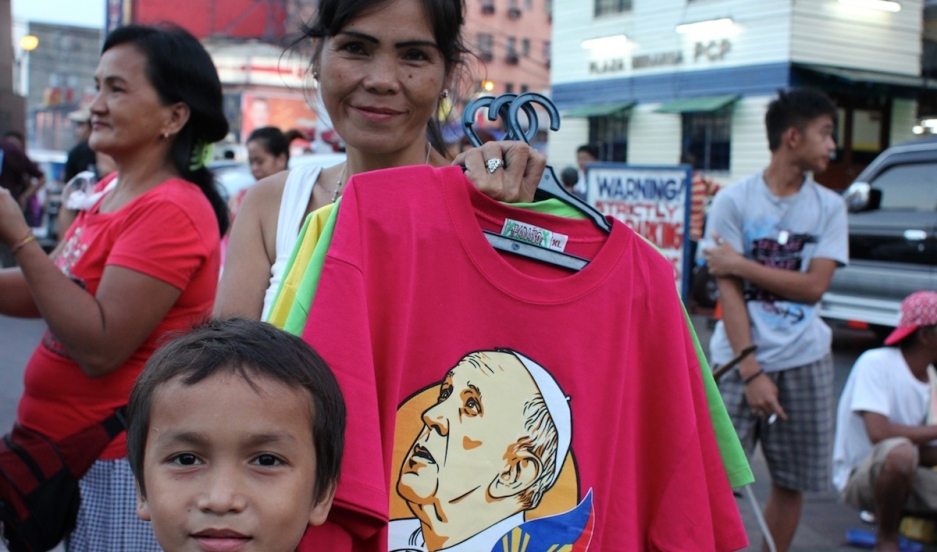 A woman in Plaza Miranda, outside Quiapo Church in Manila, sells off her dwindling stock of Pope Francis T-shirts in advance of the Pope's visit to the Philippines.

When Pope Francis holds mass in Manila this weekend, some six million Filipino Catholics are expected to show up. Mami Yuki Reyes, a vendor, plans to sell fresh coconut water nearby. She’s already doing a brisk business in pope T-shirts.

“Pope Francis is a kind man. He’ll understand us,” she says. “We’re not using him to make money, we’re just providing something for our brothers and sisters who might be thirsty or want a souvenir.”

It’s not just vendors gearing up for the crowds. Manila’s city government has instructed the 2,000 traffic officers on duty during Sunday’s mass to wear adult diapers because there won’t be enough toilets. And the Philippine president has declared the pope’s five-day visit a public holiday.

“I just want to go where’s he’s holding mass,” says Mami Yuki. Even if he’s far away, she says, his spirit will feel close. 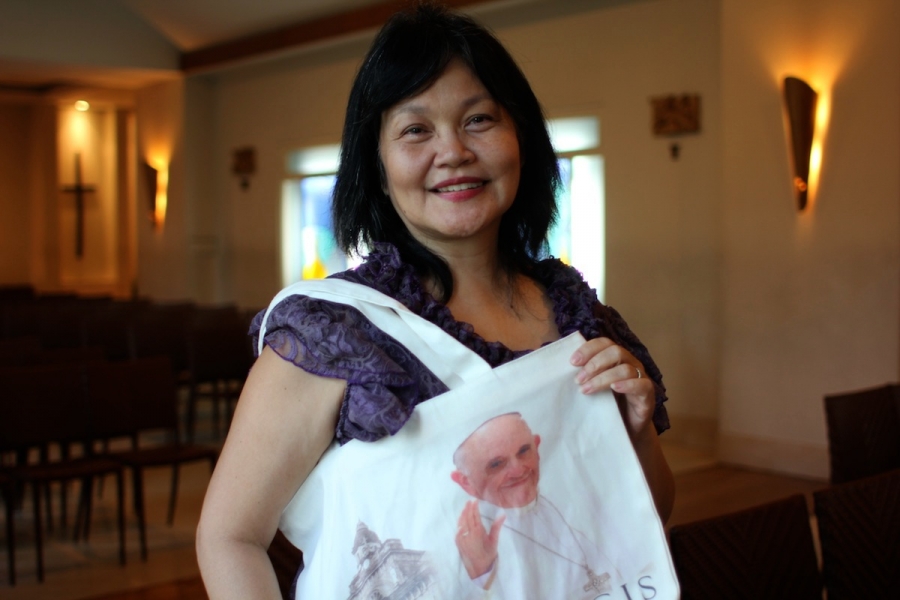 Gina de Guzman is a conservative Catholic who hopes that Pope Francis's visit will inspire Filipinos to live more closely to the teachings of the Bible.

Eighty percent of Filipinos are Catholic, led by a powerful and influential Catholic Church.

Gina de Guzman, a retired bank executive, attends Mass nearly every day. She hopes that Francis’ visit will inspire Filipinos to rededicate themselves to their faith.

“I am so sure that with the pope’s arrival, the Philippine Catholic faith will become even stronger,” she says. “Even just watching him on TV makes me cry with joy. I think that sometimes that’s what we need. We need our leaders, we need a holy person to watch us and give us hope.”

De Guzman considers herself a staunch Catholic, and her opinions are in lockstep with the country’s conservative Catholic hierarchy. “Personally, I think it would be good if the Catholic hierarchy can be vocal about their position,” she says. 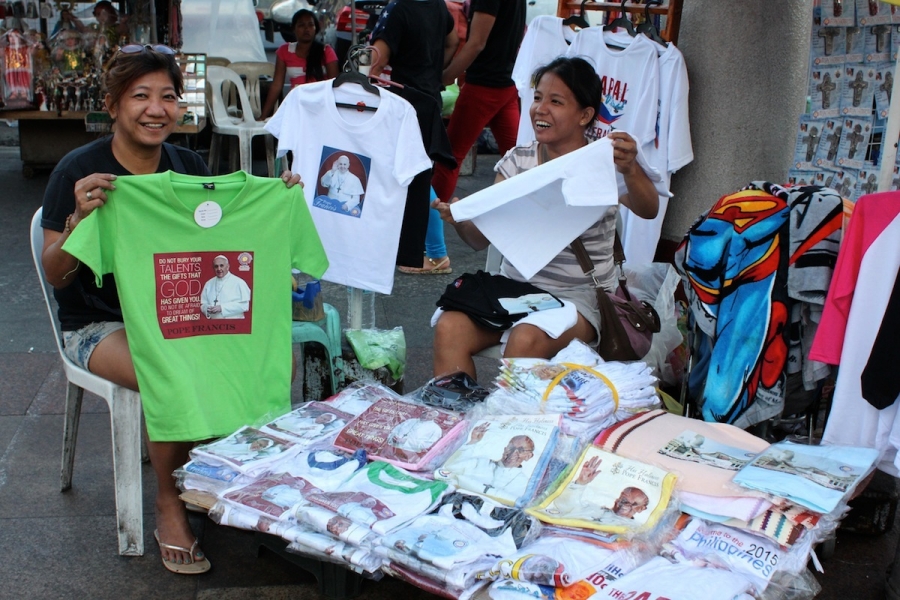 A woman shows off her Pope Francis shirts in Manila.

The Catholic Church has a long history of involvement in Philippine politics — even bringing down presidents. It recently tried, but failed, to stop a law mandating free birth control. De Guzman says that stronger leadership from the Church is the key to putting the country on the right path, especially when it comes to dealing with poverty and corruption.

“I believe that if only we would practice the word of God, there would be transformation in the Philippine society,” she says.

De Guzman’s children would also like to see a transformation here, but a different one. When I ask her 25-year-old son Vernon what he’s hoping for from the pope’s visit, he tells me he’s scared to answer the question because he’s worried his mom might hear what he has to say. Vernon, a medical student who attends mass every Sunday, says the Church here is out of touch, especially when it comes to issues of sex. 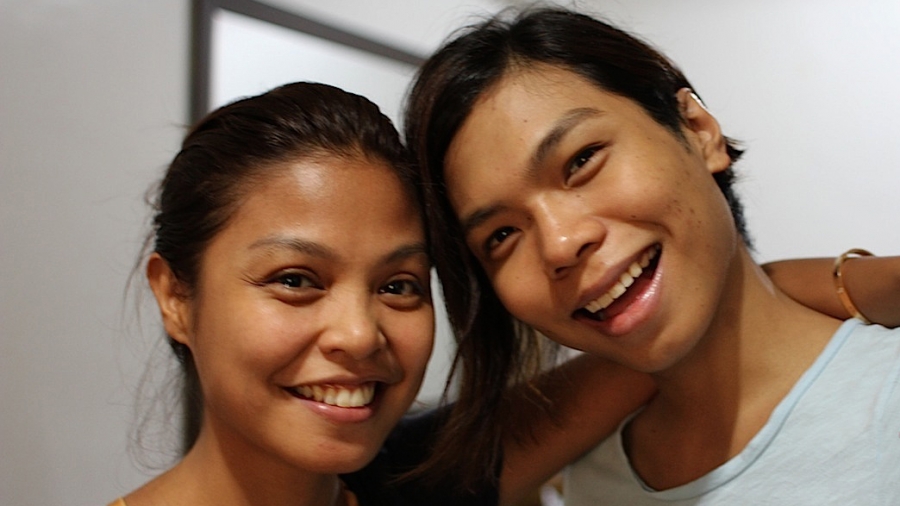 Valerie and Vernon de Guzman (r) are young Catholics, sister and brother, who hope that Pope Francis's message of openness and tolerance will influence the conservative Philippine Catholic Church.

“The Philippine Catholic Church is there, but it doesn’t really reflect what the people think or what the people do,” he says. “They are our guide, but not all the rules are being followed.”

Vernon and his sister, Valerie, say Pope Francis is a religious leader they can relate to, and his message of unity and openness appeals to them. They like the fact that people who have sinned — by getting a divorce or an abortion, or by living together — can still find acceptance within Francis’ church.

“He’s saying some things are okay, which is really great,” Valerie says. “It teaches conservative Catholics not to be so conservative.”

Vernon adds that the Church has been especially hard on gay Catholics. “A lot of gay people are very good, so why hinder their individuality because of religion? Why make them stop being religious because they’re gay?” he asks.

Vernon and Valerie both say they hope that Francis’ visit might soften the rigid conservatism of the Philippine Church. “I think Pope Francis’ visit will say, 'Hey, we’re the Catholic Church, we’re still here, we’re still alive. We haven’t neglected you,'” she says.