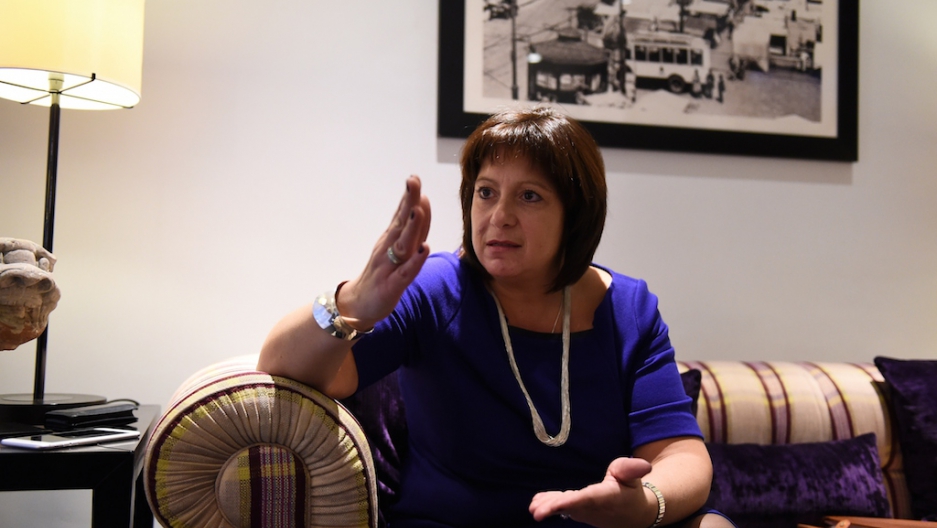 Ukrainian Finance Minister Natalie Jaresko in an interview with Agence France-Presse in December. She was born in the United States.
Credit: Emmanuel Dunand
Share

KYIV, Ukraine — If you’re an experienced legal expert who happens to speak Ukrainian and is fed up with widespread graft in this former Soviet country, why not consider a job as head of the country’s brand new anti-corruption agency?

According to the official vacancy at the National Anti-corruption Bureau, posted this week, you also need Ukrainian citizenship. But that may be the easy part.

Now, the anti-corruption body — which is bound to play a crucial role after last year’s revolution against former President Viktor Yanukovych, who’s now wanted by Interpol on embezzlement charges — may follow in those footsteps, with some officials hinting it could tap a foreigner.

Ukrainian Prime Minister Arseniy Yatsenyuk, center with his back turned, speaks with members of his government including new Finance Minister Natalia Jaresko, left, from the United States, Health Minister Alexander Kvitashvili, second from left, from Georgia, and Economic Development and Trade Minister Aivaras Abromavicius, center right with a red tie, from Lithuania.

It’s part of an apparent trend of foreign citizens taking up high-ranking government positions as the country struggles to overhaul a famously corrupt state bureaucracy.

Because Ukraine has muddled through more than two decades of stalled reforms and crony capitalism, many here are hoping that an injection of outside expertise — including from neighboring post-Soviet countries with successful track records of reform — will help jump-start the process.

Ukrainian President Petro Poroshenko himself has voiced his support for the idea, which he believes will help the country meet the dire political, social and economic challenges it faces.

“These decisions require a search for candidates for the new government not only from within Ukraine, but also from across its borders,” he told parliament late last year, according to the Financial Times, “specifically from the countries which have experience in coming out of systemic crisis of foreign and domestic nature.”

That’s why he personally approved citizenship for the three ministers, all of whom are Western-educated and have top-shelf work experience at investment funds or previous reform governments.

And on Wednesday, Justice Minister Pavlo Petrenko told reporters he tapped four Georgians for positions in his ministry, including his second-in-charge. That’s in addition to Eka Zguladze, another Georgian, who was hired last month as first deputy interior minister.

The focus will now turn to the anti-corruption bureau, whose director will be selected by a special committee. Foreign candidates will need to have secured Ukrainian citizenship by the closing date in mid-February.

The top priority is to choose an “independent, experienced and tough professional,” regardless of the candidate’s nationality.

In comments to Deutsche Welle on Monday, Prime Minister Arseniy Yatsenyuk said the top priority is to choose an “independent, experienced and tough professional,” regardless of the candidate’s current nationality.

Hiring experienced and enthusiastic outsiders with international street cred to serve in the Ukrainian government may seem like a wise move.

After the economy’s contraction of some 8 percent last year, according to World Bank estimates, the country needs both technical knowhow and good rapport with Western partners to unlock the next portion of a $17 billion International Monetary Fund bailout.

On the domestic front, Yevhen Zakharov, a veteran rights activist and secretary of the selection committee, told GlobalPost Wednesday he’s noticed a “very clear” demand in society for a foreigner to lead anti-corruption efforts.

Besides, he added, the practice represents a key European value.

But observers remain split on the benefits.

On one hand, foreign candidates are expected to be untarnished by the political intrigues that typically lurk in most local politicians’ backgrounds. But on the other, they’re unfamiliar with the ins and outs of Ukraine’s notoriously opaque bureaucracy.

Ievgen Vorobiov, an analyst at the Polish Institute for International Affairs, says the new trend stems from a low level of public trust in homegrown politicians.

But he adds that Ukraine’s tricky political landscape will give newcomers a run for their money.

“For example, the new budget allocates insufficient costs to the health care,” Vorobiov said, “but it will be Minister Kvitashvili bearing the political costs if the coalition fails to implement the reform of the sector, not [Prime Minister] Yatsenyuk.”