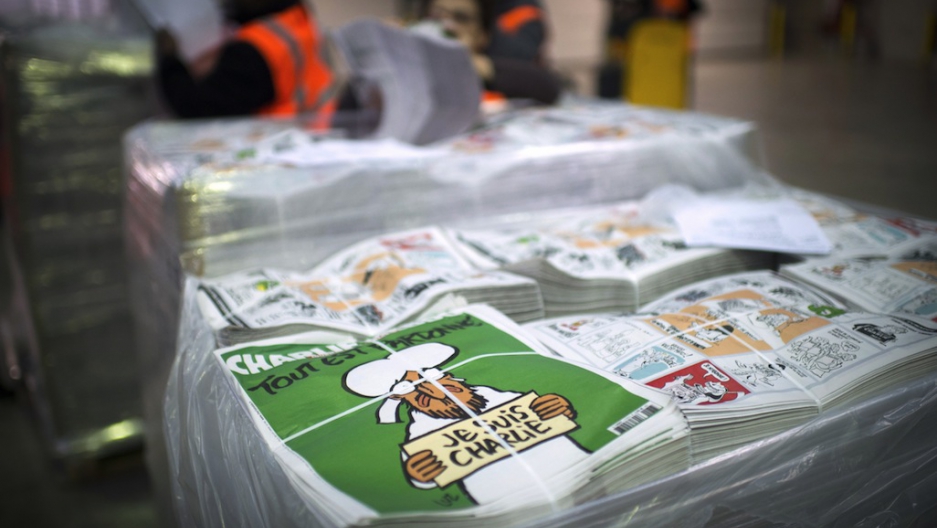 On Wednesday, it will publish at least 3 million.

The French publication is infamous in its home country — and suddenly celebrated worldwide — for its irreverent satire, particularly its cartoons that push religious boundaries. It’s believed that Charlie Hebdo’s depictions of the Muslim Prophet Muhammad made it a target in the gun attacks last week that killed 12 people, including eight of its staff shot point-blank during their weekly editorial meeting. The Paris offices were previously bombed in 2011 after running an issue with a provocative caricature of Muhammad.

Wednesday’s cover yet again features a depiction of the prophet (images of Muhammad are sacrilege in some Muslim traditions). Muhammad is shown shedding a single tear and holding a sign with the now-ubiquitous solidarity slogan, “I am Charlie.” Above the drawing: “All is forgiven.”

According to a report in Libération, the French newspaper that has taken in Charlie Hebdo journalists and staff since the attack last week, the 1,178th issue went to print around 9:30 p.m. Monday night and will appear on newsstands Wednesday morning. A Charlie Hebdo writer had said earlier the edition would be available in 16 languages, but Libération on Wednesday reported that number as five. Available in select cities internationally, the paper will be on sale for the next two weeks.

Last Friday, in their first editorial meeting since the one that ended in bloodshed, surviving Charlie Hebdo journalists agreed to make the forthcoming issue as typical as possible, rather than an homage or an obituary for those who died. They debated whether or not to leave blank pages to mark the absence of those killed but ultimately decided against it.

More from GlobalPost: #FreedomOfSpeech: What that means in the US, Britain and France

“All the readers who buy the newspaper on Wedneday at kiosks are going to buy Charlie, not an unusual issue, but the newspaper they have always bought. Some will buy for the first time, and I hope they continue to buy,” Gerard Biard, editor-in-chief, said in a video interview posted on Libération’s website. “In this issue they [the victims of the attack] aren’t dead, that has to be clear. Everyone will be there, without exception.”

The issue will include posthumous work from some of the slain journalists, editors said, such as text by columnist and psychoanalyst Elsa Cayat and possibly drawings by Stephane “Charb” Charbonnier. The eight-page issue (usually it's 16) will also feature work by cartoonist Laurent “Riss” Sourisseau, who was injured in the attack.

From infamy to fame

A paper with a relatively small circulation and funding problems just a week ago, Charlie Hebdo now finds itself with broad support across France and the globe. Tragedy has catapulted the struggling, outspoken paper to become a global symbol of free expression and resistance in the face of terror. Some observers have described it as “sacralized” by those who've jumped to support a publication they hardly know, while others marvel at the previously unimagined “mainstream” support it has received.

Newsagent Patrick Brunelle in the Paris suburb of Clichy sold every copy of #CharlieHebdo less than 30 minutes after opening this morning. Here's his waiting list for when more copies arrive. #globalpost

Founded in 1970, Charlie Hebdo came on the heels of another irreverent weekly, Hara Kiri, which was banned after satirizing the death of former President Charles de Gaulle. From the beginning, the approach at Charlie Hebdo was sharp and met with varying success, with readership and funding oscillating significantly over the decades. In 1981, the newspaper shut down and remained closed until 1992. Its weekly circulation up to last week was about a sixth of what mainstream newspaper Le Monde puts out every day.

But many of those who have “become Charlie” — the #JeSuisCharlie hashtag has been used millions of times in the last week — aren't actually readers of the publication. Abroad, few had even heard of the provocative newspaper, one of the few publications that dared to reprint controversial Muhammad cartoons after they were published by a Danish newspaper in 2006.

Controversy has always been at the heart of the journal, which criticizes anything and everyone, including political figures, Jews, Muslims and Christians. Olivier Cyran, a journalist who worked with Charlie Hebdo from 1991 to 2001, eventually left saying he could not support its Islamophobia.

Following the attack last week, Charlie Hebdo posted a message on its website asking for financial support, saying the paper needed help to survive. As of Tuesday evening, the crowdfunding site Leetchi had raised over 146,000 euros (about $170,000).

Significant funding has been provided by previously unlikely sources. French Culture Minister Fleur Pellerin announced after the attack that the government would allocate 1 million euros to assure the continuation of the paper. The Digital Press Fund, paid for by Google, donated 250,000 euros. Money has also come from The Guardian. Major companies and political figures have shown their support by reserving copies of Wednesday’s paper.

In addition to office space donated by Liberation, technical support has come from Le Monde, Radio France, and France Television.

Charlie Hebdo cartoons featuring Muhammad continue to be points of controversy, both in France and abroad. The United States government and certain US media companies have been criticized for not demonstrating full support for Charlie Hebdo. The New York Times, National Public Radio, The Associated Press and other media chose not to reprint the cartoons without obfuscation. On Monday, the White House admitted it had made a mistake in not sending a high-level representative to a massive solidarity march in Paris on Sunday.

More from GlobalPost: 7 cartoonists who have faced violence and threats for their work