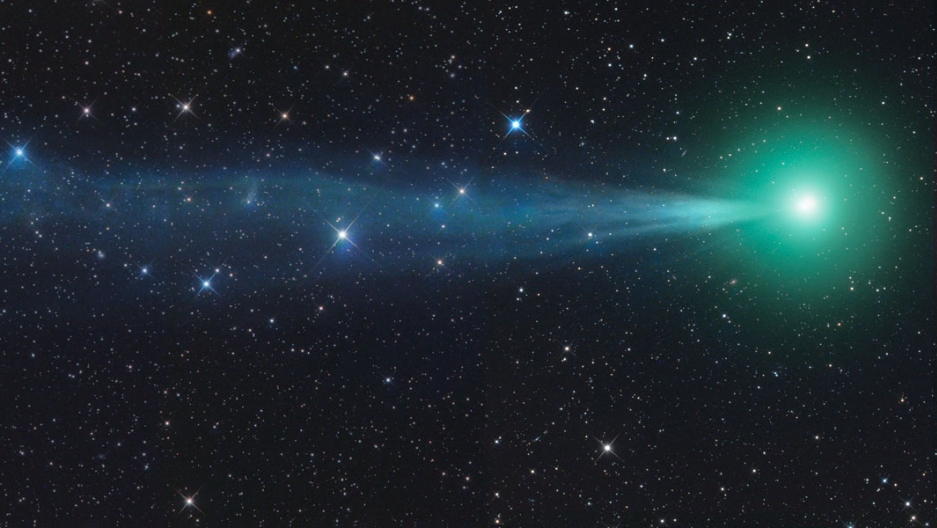 Comet Lovejoy has probably passed through the inner solar system at least once already—we just weren't alive to see it.

Is your New Year's resolution to stop staring down at your phone so much? Here's a reason to look up.

Comet Lovejoy, a bright celestial ball of dust and ice probably born in the Oort Cloud, is currently traveling across the skies of the Northern Hemisphere. While photographer Gerald Rhemann snagged a shot of Lovejoy on December 22 (from the Southern Hemisphere), casual observers in the top half of the world might be able to enjoy the show into February.

“Comets this bright [appear only] every few years, on average,” says Matthew Knight, a research scientist who studies comets at Lowell Observatory in Flagstaff, Arizona. Indeed, some viewers with keen sight might be able to spy it with the naked eye from a location far from urban lights— think the Arizona desert or Michigan's Upper Peninsula.

But most skywatchers will probably benefit from a telescopic lens. The good news is that binoculars— say, a pair of 10 x 50s— should do the trick, according to Dean Regas, outreach astronomer at the Cincinnati Observatory. “The farther away from the city lights you can get, the better,” he adds.

Prime viewing conditions start right after dark, when bright stars emerge. Comet Lovejoy (officially designated C/2014 Q2) will appear highest in the southern sky at around 8 or 9 p.m. The loftier it is, the less atmosphere you'll be peering through, and the better you'll be able to see it, Regas says.

"When you see Orion's belt, that's an indication you can probably start looking for it,” he says. This map from Sky & Telescope magazine charts the comet's path.

“It's definitely bigger than the stars that are also in the field, [and] you can see it moving. If you're there for half an hour, you can tell that it's moved relative to the stars nearby,” Knight says.

You might even notice a green glow. How come? When ultraviolet light from the sun hits gas molecules in the comet's coma, they get excited. To return to a stable state, those molecules release energy at different wavelengths.

"The one that we happen to see most easily with the human eye is the one that's in the middle of where our eyes are [most] sensitive"— that is, the green region of the visible spectrum, Knight explains.

The molecules responsible for the green glow are pairs of carbon atoms, called diatomic carbon. Other gas molecules in the coma emit energy when they're excited, too— just not at wavelengths that we can see, or not at the same intensity as diatomic carbon's.

But Regas says that many viewers won't notice the green tint; humans don't see colors that well in dim light. Instead, they'll see what he describes as a “gray fuzzball.”

Using an instrument that lets in more light, like a telescope instead of basic binoculars, might help you detect the green halo. And “cameras are more sensitive to colors in dim light than the human eye is,” Regas says, which explains the impressive images that photographers have been rolling out.

Gerald Rhemann created the image above using a remote-controlled private observatory equipped with an astrograph, a telescope specifically designed for astrophotography. It's located at the Southern Sky Lodge in Namibia, where there are “excellent observing conditions,” he wrote in an email. The picture is a composite of several photos taken with different filters.

On January 30th, Comet Lovejoy— the fifth comet discovered by amateur astronomer Terry Lovejoy, who located it from Australia last August— will reach perihelion, its closest point to the sun, at about 120 million miles.

“That's when it could be its absolute brightest,” says Regas, although it will be farther from the Earth, at slightly less than 70 million miles. “Keep an eye on it for the rest of the month” to see if its brightness changes, he suggests. “All comets are fickle beasts, that's for sure. You're not sure what they're gonna do, how they're gonna pan out.”

If you don't catch the whizzing orb in the next few weeks, you'll have to wait another 8,000 years or so before it comes back around. That's the fascinating thing about comets, says Regas: “They are hidden from view for the vast majority of their life, 'cause they're way in the distant part of the solar system, and we get to see them on those [fleeting] rare occasions.”

This story comes from PRI's Science Friday with Ira Flatow. If you've spotted Comet Lovejoy, send us your picture!