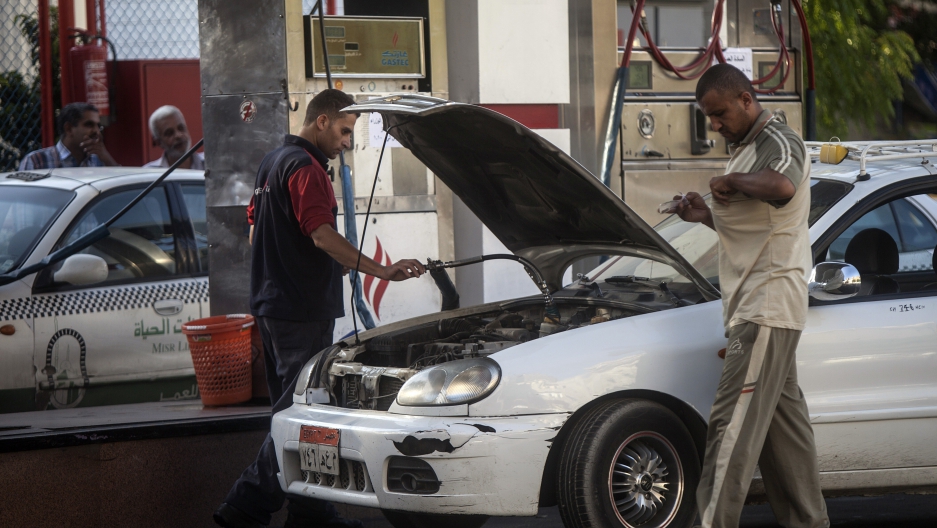 A Egyptian worker fills the car of a client at a petrol station on July 5, 2014 in Cairo as the government drastically raised fuel prices to tackle a bloated subsidy system.
Credit: Mahmoud Khaled
Share

CAIRO — Tamer Allam was on the Cairo-Suez road on his way back from a family vacation when he stopped at a gas station.

His wife and children in the car, Allam’s father, sister, uncle and other family members rode in a group of vehicles. He had no idea that this part of his journey would take him on one of the many paths that lead down into what Egyptians call the “deep state.”

The deep state is Egypt’s decades-old labyrinth of state security services that overlap with business, industry and land development. It all falls under the authority of Egypt’s vast military bureaucracy. Now, in the aftermath of a military coup that thwarted what many here hoped was a democratic revolution amid the Arab Spring of 2011, the “deep state” has grown deeper.

Allam found this out the hard way last August, according to local press reports, tweets from his sister, and NGO statements. The wait for gas longer than usual, Allam got into an argument with one of the gas station employees. He was arrested and is now facing a possible military trial.

That’s because the man he argued with, Khaled Mohamed Shehata, was not just someone pumping gas, but an army colonel. As it turned out, the gas station is one of hundreds owned by the Egyptian military.

While the new Egyptian constitution bans military trials for civilians in most cases, it provides a list of exceptions, including crimes allegedly committed on military property.

In early 2011, a popular uprising against many decades of a brutal rule by a police state gathered force around Cairo’s Tahrir Square and toppled the 30-year autocratic rule of Hosni Mubarak. That street protest led to the first free and fair democratic election in Egypt’s 5,000 years of history and elected a president, Mohamed Morsi, who hailed from the Muslim Brotherhood’s political party, and who was backed by a majority of Islamists in what was left of parliament after the military dissolved the lower house before his election.

But after what was perceived as a year of poor governance by Morsi and a series of missteps by the Islamists in parliament, the people took to the streets again. Morsi was taken into custody and placed under arrest, held by the military and ultimately removed from power. Parliament’s upper house was disbanded. A new election was called which brought Abdel Fatah al-Sisi, a former army general and defense minister, to the presidential palace where he now presides over what many Egyptians accept is a return to military rule.

When Sisi announced he was removing Morsi from the presidency, he revealed what he called a “road map” that indicated the constitution would be amended and swiftly followed by parliamentary and presidential elections. That process was to take a year, yet the parliamentary elections have only this month been scheduled to take place March 21 through May 9.

The case of Tamer Allam can be seen as a parable for Egypt’s future, and whether it will continue down the path toward greater democracy — or retreat into the shadows of more years of military rule.

Factories, gas stations, supermarkets or holiday resorts are all an unlikely site of military power in most countries, but not in Egypt. The Egyptian military is deeply rooted in civilian economic affairs, from the construction of certain factories to subcontracting the labor in what, from the outside, looks like a private business.

Cases where the military directly and sometimes publicly owns a business is just one level. Beyond this exists a further “second tier” involvement, where former generals or those with close military ties own or co-own a supposedly private business.

As the argument at the gas station escalated, the army colonel Shehata ordered Allam restrained, at which point the soldiers dragged him out of his car and the colonel summoned military police forces to the gas station, Allam’s sister Perihane recounted on Twitter later that day.

Allam’s family members starting making calls to contacts in the military hoping to deescalate the situation and it seemed an uneasy truce had been reached. Then the military police arrived and a junior officer reignited the argument with Allam, swearing at him. When Allam lost his temper and talked back, the officer ordered the military police unit to arrest him.

They surrounded Allam and aimed their guns at him and his wife and children. They broke the car windows and Allam’s extended family started interfering, trying to separate him from the soldiers as they beat him.

An officer approached Perihane. The soldiers tried to arrest her too and beat a third family member before taking Tamer Allam away in a military van to a military base.

Tamer was charged with damaging the gas station supermarket, injuring a soldier and assaulting others. He was released on bail but the case was not dropped, only suspended.

The Allam family, which is now reticent to speak to the press despite initially going public with their story, fear retaliation from the military.

Theirs is a revealing story about life in Egypt amid the deep state, including the military’s pervasive and largely unchecked presence in almost every aspect of daily life.

So why does the military own something like a gas station? The answer lies in the military-owned National Service Projects Organization (NSPO), a conglomerate of companies that includes the National Petroleum Company and its hundreds of gas stations.

These gas stations are owned by the military, staffed by conscripts and managed by officers. Like all NSPO projects, proceedings go to a bank account belonging to the Ministry of Defense, not the state budget, and the military is exempt from all taxes and tariffs.

The road the Allam family was traveling tells an even grander story of corruption, according to critics. The Suez desert road was maintained and expanded by the military after it won a government bid to do so, a common occurrence. This toll road is expected to bring in $112 million annually for the military over the next 50 years.

Estimates put the level of military control of Egypt’s economy as anywhere between 5 and 40 percent — the accurate figure, economists and military analysts say, is impossible to ascertain. The military itself says it controls no more than 2 percent of Egypt’s GDP annually.

Even two or five percent is no small amount, however. And direct ownership pales in comparison of the aspects of the economy the military has direct influence or control on regardless of what it owns on paper.

A true measure of the number would be impossible; no civilian agency in the country has access to the military’s books.

Just like Tamer Allam, Egypt is only trying to refuel and move on, but it seems in both cases the military is determined to get in the way.

Allam is now free and hoping the case will be left suspended as long as he does not cause any trouble. But it could still be brought back into military court at any moment. Such is the power of the military in Egypt.

Support for this project was provided by The Correspondents Fund with additional funding from the Stabile Center for Investigative Journalism at the Columbia University Graduate School of Journalism in New York. The reporting fellowship is dedicated to the spirit of late colleagues Anthony Shadid, Marie Colvin and James Foley who all dedicated themselves to on-the-ground reporting to tell the stories of the people caught in the tumult and conflict of the Middle East.