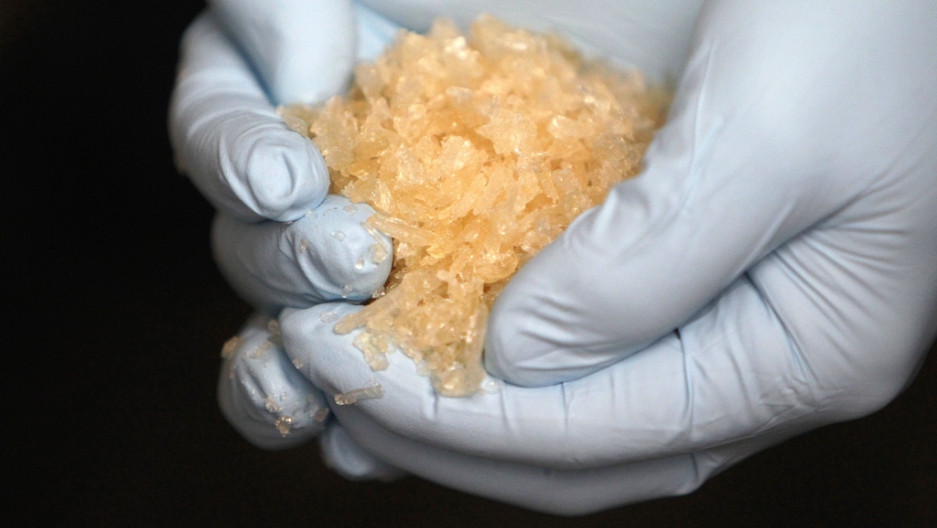 Wonder why it's called crystal? Have a look: a handful of methamphetamine at police headquarters in Wiesbaden, western Germany, in November.
Credit: Daniel Roland
Share

You can get busted, a rival gang can kill you for the product, you can inhale toxic fumes, or you can blow yourself up.

Still, it is the best way that Bernardo, a scrawny 41-year-old deportee from California with jailhouse tattoos, sees of making a living.

“How the fuck else are we going to get by?” Bernardo asks, speaking in an accented English he learned on California’s streets and in its prisons. He asked to use only his first name because police could arrest him. “I might get a job picking tomatoes now and again but meth is the only way here to make some real money.”

Bernardo is one of thousands of meth cooks for hire who have helped drive Mexican production of the hyper stimulant to unseen levels.

Border Patrol agents nab the drugs from smugglers trying to sneak between the ports of entry. Meanwhile, customs officials seize even more meth at border bridges. Last year in the San Diego section of the border alone, customs agents took a whopping 14,732 pounds of meth.

All together, the US seized 34,840 pounds of methamphetamine at the Mexican border. That’s more than 17 tons — equal to the combined weight of about seven midsize SUVs.

Spenser, a drug-sniffing yellow lab, follows close to a car entering the US from Mexico after catching the scent of a substance hidden inside that later tested positive for methamphetamine at the San Ysidro Port of Entry.

Mexican traffickers have achieved this booming meth production by adapting their labs, switching recipes, and finding new sources of precursor ingredients, GlobalPost found in interviews with traffickers, drug agents and in government reports.

The smugglers feed “tweekers,” as meth users are known, across the US. They take the stimulant to party, to work long hours, or to feed their addiction. The drug can be smoked, snorted, injected or taken orally. Long-term users risk permanent damage to their lungs, kidneys or brains. They may also suffer from “meth mouth” — rampant tooth decay and severe gum disease.

It is big money, though. In California — one of the largest markets — each pound of meth sells for $9,000 to $10,000, a spokesman for the Customs and Border Patrol said. In some other parts of the country it’s worth double that.

A progressive series of mug shots show the effects of crystal meth use, at the DEA Training Academy in Quantico, Virginia.

Dealers break the meth down to sell it in $25, $50 or $100 packages to users. In total, Americans spend between $6 billion and $22 billion on meth every year, according to a White House report.

Profits for meth are higher than most other drugs because the ingredients to make it are so cheap, including chemicals used in flu medicine.

“These guys get ingredients worth $65 and turn them into drugs worth $18,000 or more,” Mike Vigil, former head of international operations for the Drug Enforcement Administration, says of meth producers. “That wealth turns into power. It allows the cartels to buy sophisticated weapons. It gives them an opportunity to expand their distribution tentacles. It allows them to buy political favors through corruption.”

It also drives violence. The war between rival Mexican drug cartels and the security forces is estimated to have left more than 80,000 dead since 2006, including many bystanders.

Biker gangs and others used to produce most American meth in small labs inside the United States, often in bathtubs. But the 2005 Combat Methamphetamine Epidemic Act heavily regulated precursors, effectively smashing this industry.

Mexican cartels filled the gap, stepping in to build super labs in Pacific states such as Sinaloa and here in Michoacan. However, as Mexican police and soldiers busted these vast operations, cartels adapted their methods, Bernardo explains.

As well as running some big labs, the crime syndicates now often cook meth — known here as “hielo” (ice) — in clusters of small labs scattered over hills and valleys. Traffickers with capital buy raw ingredients in bulk, then subcontract producers like Bernardo to do the dirty work.

Bernardo says he earns $1,000 dollars for each kilogram of meth he cooks up. When he gets a commission, he heads to the hills and sets up a temporary lab with plastic barrels and generators. The finished product — which looks like flaky white, blue or pink crystals — is packed into plastic Tupperware-style boxes.

“I try and work fast to get out of there as quickly as possible,” Bernardo says.

“Somebody might come and steal your shit. Or soldiers might find you. Or the shit could blow up in your face.”

A native of this farming town, Bernardo first learned to cook meth when he lived in San Bernardino, California before he was arrested and served seven years in prison. When he returned home in 2011, he worked for the Knights Templar drug cartel, which controlled Michoacan state.

However, a vigilante movement pushed the Templars out of the Antunez last year. The authorities later deputized many of those vigilantes into a new rural police force.

Since the Templars have gone, many cooks have returned to making meth, Bernardo says. They now work for a new web of traffickers, including some former Templars and others with links to the Jalisco New Generation Cartel.

Michoacan has seen a recent surge in violence as scattered groups of traffickers, vigilantes and rural police fight each other and the federal security forces. One firefight near the town of Ruana caught on video in December left 11 dead. More gunfights erupted in nearby Apatzingan this month.

“During several years, the control of Apatzingan was in the hands of the Templars, and now there are several groups with their own interests trying to push in,” said Alfredo Castillo, the federal government’s security commissioner for Michoacan.

Soldiers have busted two meth labs in Ruana in recent months. Security forces have also raided labs in Michoacan capital Morelia and neighboring Mexico State. The operations were in residences and warehouses, and in cities as well as in the countryside.

Mexican traffickers import the raw ingredients — or precursors — into Pacific ports such as Lazaro Cardenas in Michoacan. Back in 2007, Mexican security forces busted record quantities of a precursor called pseudoephedrine, much coming from China.

However, after Mexico cracked down on pseudoephedrine, the traffickers have switched to other ingredients.

Forensic profiling on meth smuggled through Mexico into the US in 2013 shows that 90 percent of it used a recipe with an ingredient called phenyl-2-propanone, or P2P, according to a report by the International Narcotics Control Board.

Officials have seized P2P as far afield as Australia, Slovenia, Nicaragua and the Philippines, the report notes. In 2013, the Philippines police arrested three alleged Mexican cartel members with a stash of meth.

The Knights Templar — who portray themselves as righteous warriors, named after an order of monks from the Crusades — had banned sales of meth inside Michoacan’s own towns. However, since they have been pushed out, Bernardo says some people are selling it locally, which also adds a boost to his production.

Bernardo says he occasionally gets high on his own supply himself, getting the rush of energy and euphoria provided by amphetamines. But he says he has taken it for several years and never developed a serious addiction.

“I sometimes take it when I am cooking, because I have to stay awake for a long time and be alert,” he says. “Maybe some people have problems with it. But for me, it’s just a chemical. It is up to you if you want to take it or not.”