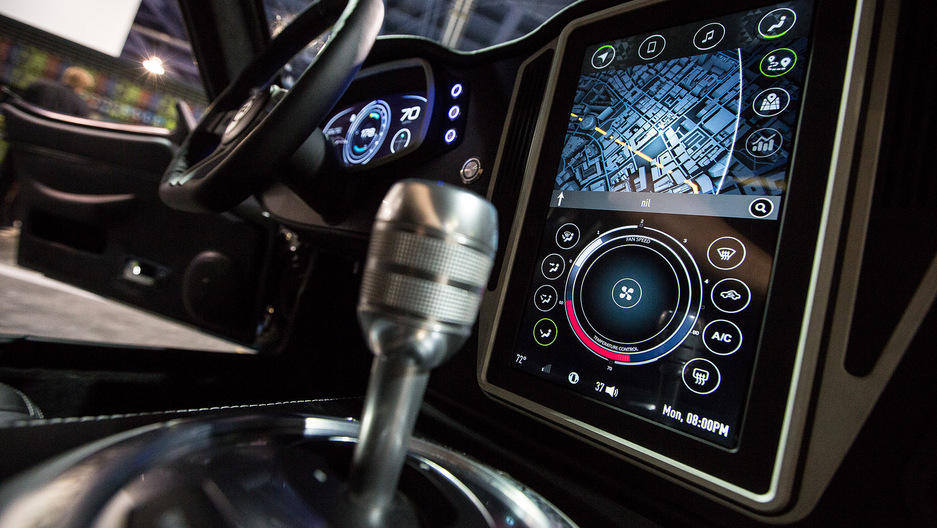 The NVIDIA Tegra X1-powered digital cockpit in the Renovo Motors Coupe, on display at the NVIDIA booth at CES 2015 in Las Vegas.

Last week, tech enthusiasts, business execs and journalists — some of them arriving in self-driving cars — congregated in Las Vegas for the International Consumer Electronics Show.

Lauren Goode, a senior reviewer at tech news site Re/Code, was at CES this week. Here’s a rundown of some of her top tech picks from the expo:

This year was all about the cars

Automakers have really started to increase their presence at CES as they begin to integrate more and more technology into their vehicles.

In addition to new hydrogen-fueled and electric cars, Goode says she saw a lot of "connected cars,” which can mean a few different things. “In some cases, it means that you have connectivity between your smartphone and your dashboard and you're running apps and that sort of thing,” she explains. “In other cases, it might mean that you actually have wireless service in the vehicle. So a couple automakers, such as Audi and GM, have announced that they're working with AT&T to offer 4G or LTE wireless within the cars.”

A few different self-driving cars were also showcased this year. “A bunch of lucky journalists got a ride from California to Las Vegas in a piloted Audi A7," Goode says. "We were not, unfortunately, a part of that group at Re/Code, but I hear that it was a successful ride."

Cameras embedded in a mirror take a picture of you and then project your image on top of your reflection. You can apply different make-up, hairstyles or even facial hair as you view yourself in the mirror, giving you a “preview” of what you might you look like.

“This is just a concept,” Goode says. “Panasonic [who introduced the device] has made it very clear that they don't have a ship date for this, they don't have a price point for this. It's a little bit kitschy, to be quite honest ... but, it was still pretty cool.”

“A big push around 3D TV was made a few years ago, and it didn't quite catch on the way TV makers were hoping that it might,” Goode explains. “Now when we see 3D technology in TV sets, it's generally an ancillary feature. It's not the main event."

Several cameras were announced this week that use facial recognition technology in the software that monitors your home. “Instead of just remotely monitoring your home from afar and seeing that the cleaning person arrived or my dog ate the couch again, now you can actually store data about the people moving in and out of your house throughout the day on the camera,” Goode explains. "If someone shows up that the camera doesn't recognize, you can be notified."

There are privacy concerns that come with this kind of software, but Goode think it's an interesting approach to home security and home monitoring. “Dropcam, which is now owned by Nest, which is now owned by Google, has gotten a lot of attention over the past couple years for being a really simplified, accessible home video system,” Goode says.

Goode personally did not get to fly any drones (“There’s only so much time when you're trying to play with thousands of gadgets in five days,” she says.) But there were a lot of drones. Drones are growing in popularity and they're getting a lot of attention, but Goode still sees them as a niche product. They are also “wildly divergent” in terms of what the technology can do.

“You're either buying one that's $1000 to $3000, and this is a really high-powered, cool machine," she says. "Or, you're looking at something in the $100 to $300 price range that's considered more of an entry-level drone for people that are just trying to get their feet wet."

This is an area where you see a good bit of copycat tech, Goode says. She saw a lot of smartwatches and a lot of activity trackers, but some of them, in her opinion, are “making incremental or iterative improvements over previous models that we've seen.”

“Some of the companies will say that their algorithms or their software are better, so as they're tracking your data, they're doing different or more helpful things with it. I think that that still has yet to be proven in some cases,” Goode says.

Goode recently tested the Withings Activité, which is really more of an activity tracker, but in a beautiful Swiss-made watch form. “I actually enjoyed testing that because it was the first watch in a long time I had tested that I didn't feel like a total geek,” she says.

Most tech aficionados are still waiting for the launch of the Apple Watch (Apple does not participate in CES). “I think people are going to be really excited to see what Apple brings to the smartwatch market,” Goode says.

This isn’t a new device, but it’s a significant trend. “Everything’s a technology conference now,” Goode reports hearing someone at CES saying.