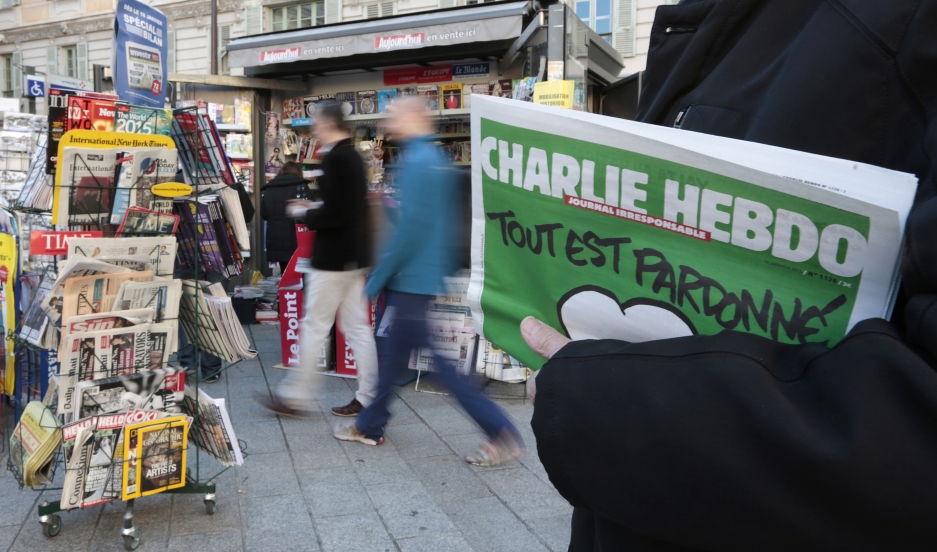 A man holds the new issue of satirical French weekly Charlie Hebdo, entitled "Tout est pardonné" ("All is forgiven"), at a kiosk in Nice on January 14, 2015.

Or it was. The magazine usually prints just 60,000 copies, but the demand for this "survivors' issue" led them to print three million of the latest edition. And that huge run will be boosted to five million after the first run sold out within hours.

The World's Leo Hornak was one of the lucky people who got his hands on a copy — sort of. "I'm holding in my hands the BBC Paris bureau's only copy," he says. "It is a treasured item in this office. I had to sign it out with the bureau chief when I came in. He wants me to personally give it back to him so he can put it in his briefcase."

The cover is a cartoon of the Prophet Muhammad holding a “Je Suis Charlie” sign in his hands. There's a tear in his eye, and above him are the words "All is forgiven" in French.

"I had this idea that I was stuck on: to draw my caricature of Muhammad, the one that had started all the chatter, and to do him holding a 'Je Suis Charlie' sign," said Luz, the man who drew the cover, explained to French newspaper Liberátion in an interview translated by Slate. "It made me laugh. It was my last-ditch effort."

Luz seemed to sympathize with the prophet he was drawing: "I saw this character that had been used in spite of himself by nut jobs who set shit on fire, by terrorists. Humorless assholes, that’s what these terrorists are. Of course everything is forgiven, my man Muhammad. We can overcome, because I managed to draw you."

The cartoon got the approval of the rest of the staff. "I showed my drawing to Richard Malka, then to Gérard Biard, and then we cried," Luz said, "because we had it: A cover that looked like us, and that didn’t look like everyone else or like the symbols that have been imposed on us over the last few days. Not a cover with bullet holes, but just a cover that makes us laugh."

But French Muslims aren't laughing as hard at the cover. Some are buying the cover to support French freedom, Hornak says, but one female student he spoke with says it felt like a repeated insult.

"On this most important edition, which is supposed to bring people together and bring the French nation together, there is yet again a picture — as a caricature — of the Prophet Muhammad," she says. "It feels like rubbing salt on the wounds rather than being a unifying gesture."

Vivienne Walt, a Paris-based correspondent for Time, says the new edition of Charlie Hebdo is actually a lot less "in your face" than normal issues: “It’s much more of a cry of grief, and an homage to slain colleagues, and a reflection on the week. I mean, it just seems like 16 pages of raw emotion.”

And while many French people appear to support the "publish and be damned" attitude of Charlie Hebdo, there is no tolerance for anyone speaking out on behalf of the attackers. In fact, 54 people have been arrested since the attacks on charges of hate speech, glorifying terrorism or anti-Semitism.

Among those arrested is controversial comedian Dieudonné. He’s charged with defending terrorism after temporarily posting a comment on Facebook that said "Tonight, I feel like Charlie Coulibaly," in reference to Amedy Coulibaly, who killed four people last week when he took over a kosher supermarket in Paris.

Dieudonné has a history of controversial statements on race and religion in France — and the legal problems that come with them — but his lawyer said he simply was trying to convey his mixed feelings about the attack.

Much like Coulibaly, Dieudonné is of West African descent, "and therefore felt some identification with him," Walt says. "And the Charlies reference was because he felt like he, too, was a comedian who criticizes all religions and is highly controversial.”