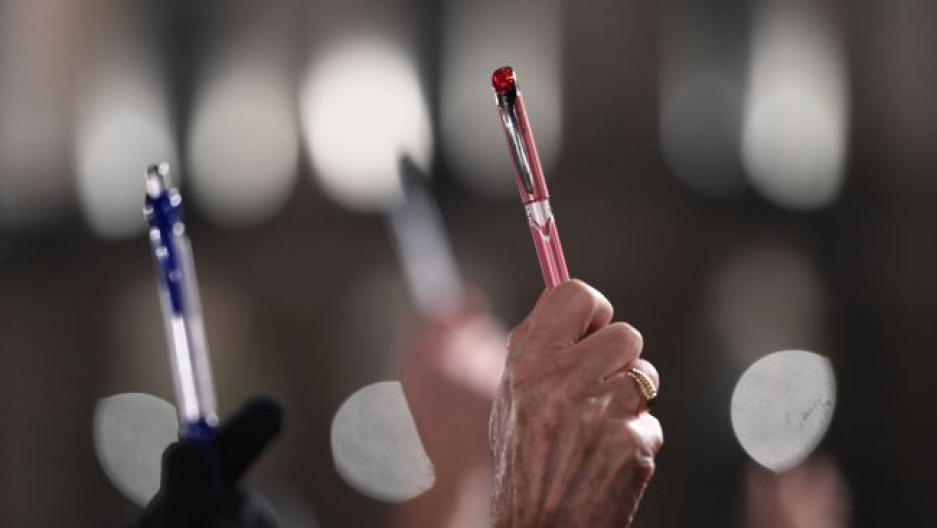 People hold up pens during a protest in the French city of Rennes on Jan. 7, 2015, following an attack by masked gunmen on the Paris offices of satirical weekly Charlie Hebdo.
Share

Now the satirical paper is going to print again with its first post-attack edition, and the freedom of expression debate is raging on.

What’s on the cover? You guessed it — a new cartoon of Prophet Muhammad. That's forbidden in Islam, but Charlie Hebdo and its fast-growing fan base insist the paper has the right to print it.

Some are wondering what that right is all about. Americans know something about their First Amendment. International law also protects freedom of expression and opinion — it’s in the second sentence of the Universal Declaration on Human Rights. In practice, it varies considerably by country, even within Europe.

Here’s a brief explainer on the different legal interpretations of free speech in the United States, Britain and France.

The US has the First Amendment: “Congress shall make no law respecting an establishment of religion, or prohibiting the free exercise thereof; or abridging the freedom of speech, or of the press.” What First Amendment protections exist in say France or Britain?

None. The Bill of Rights applies only in the US.

Sorry. But both France and Britain are signatories to the European Convention on Human Rights and the International Covenant on Civil and Political Rights, which spell out countries’ obligation to protect citizens’ rights to free expression, even of controversial or inflammatory opinions. (The US has signed on to the ICCPR as well.) They have national laws protecting free speech as well.

And citizens here are serious about that freedom. When marchers mobbed the streets across France this weekend, many raising pens toward the sky, they were showing solidarity with the slain staff of Charlie Hebdo. But demonstrators were also taking a stand for the newspaper’s right to express itself through controversial cartoons.

That said, there is a key difference in the laws’ wording. The First Amendment expressly prohibits laws limiting free speech. Britain and France’s laws essentially say that citizens have free speech unless the government legislates otherwise, leaving those countries more room to bar certain types of speech explicitly.

So I can say whatever I want in the US? Great! I am off to leak these documents, then libel some folks, and joke about violence on Twitter.

Hold on. The high bar set by the First Amendment doesn’t mean anything goes. It just means that challengers — including the government — have to work a lot harder to legally restrict speech.

Court cases have identified specific examples when US law supersedes an individual’s right to free expression. The First Amendment does not protect an individual who has shared secrets that could harm national security, for example, or who has falsely defamed another person.

Just don’t. Here’s an example. In 2010, a disgruntled 28-year-old British passenger in Yorkshire grumbled on Twitter about blowing the airport “sky high” after his flight was canceled. He was arrested by UK anti-terror police and charged with making comments “grossly offensive or of an indecent, obscene or menacing character” under the Communications Act. His conviction was later overturned, but not before he lost his job.

Under British law, the words themselves were a crime. But in the US, authorities have to link the words to punishable offenses to take action, such as those barred under the Homeland Security Act.

Two British twentysomethings found this out in 2012 when they joked on Twitter about being off to “destroy America” before boarding a flight for a US vacation. “Destroy” is British slang for “get really drunk in.” Upon arrival at Los Angeles International Airport they were detained, questioned, and sent back to London immediately as “inadmissible to the United States.”

Moral of the story: No jokes about air travel, anywhere.

What about hate speech?

This issue has come up around Charlie Hebdo as well, a publication whose satiric cartoons took aim at just about every religious figure — particularly the Prophet Muhammad.

The US has no blanket law against hate or racially offensive speech. The target of such speech can pursue redress in a civil or criminal court by claiming its harassment, for example, but the speech itself is usually protected.

In France and Britain, defaming a person’s race, religion or sexual orientation can be a criminal offense resulting in fines or jail time. Often, it’s left to the courts to decide where the line between racism and free expression lies.

In fact, several French Muslim groups sued Charlie Hebdo in 2007, charging that the magazine’s cartoons were racist. French luminaries including then-future presidents Nicolas Sarkozy and Francois Hollande wrote to the court to defend the magazine and France’s tradition of free expression. Then-editor Philippe Val was acquitted, with the courts ruling that the cartoons mocked terrorism and fundamentalism, not Muslims themselves.

I have been libeled and I demand justice! Where should I sue?

Pack your bags for the UK. English and Welsh courts (Scotland and Northern Ireland are separate) are globally famous for their plaintiff-friendly rulings in libel and defamation cases. There, the law assumes that any derogatory statement is false, and it’s up to the defendant to prove otherwise. The opposite is true in the US.