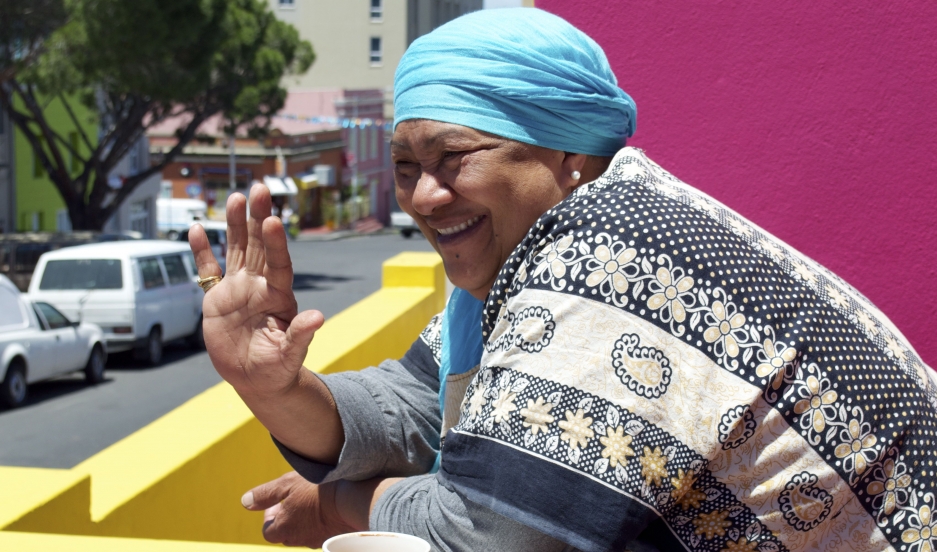 Cape Town grabs you by the throat — the stunning landscape, the brutal history, the hopeful present. My second day in town I wander into the Bo-Kaap neighborhood, the old Muslim quarter, known for its candy-colored houses and delicious food. Many people here call themselves Malay, a South African term for those descended from slaves brought from other parts of Africa and all over Asia starting in the 17th century.

Janap Masoet is leaning on the wall outside a fuschia house taking in the morning sun. She’s 60 years old, chatty and soon she invites me in to meet her sister Niesa Bosch, 63. It turns out they’re both fixtures on the tourism circuit. They make money teaching foreign visitors the old Malay recipes for soups and curries that their grandmother taught them.

Even as we talk, Niesa is prepping a pile of chicken pieces for a curry “demo” later in the day.

The sisters are obviously close. Janap lives around the corner with her daughter, but spends many of her days here with Niesa. They anticipate each other’s stories and finish each other’s sentences. It would be easy to assume they’d been here all their lives. But they haven’t. Apartheid upended their lives when they were young adults, ripping them from their childhood home. 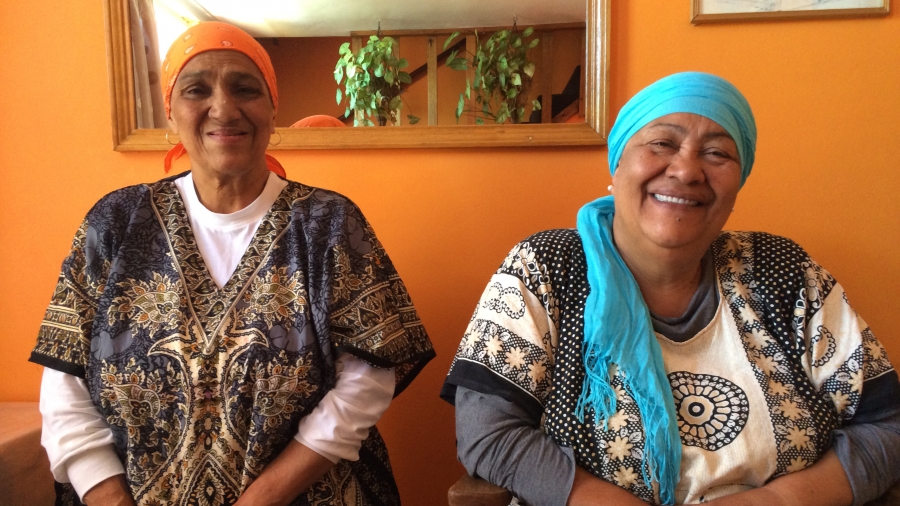 Niesa Bosch, left, and her sister Janap Masoet had to leave Cape Town’s Bo-Kaap neighborhood, where they grew up, when it was declared Whites-Only under the apartheid Group Areas Act.

They grew up across town as part of a large, close-knit Malay family in a vibrant, multiethnic neighborhood called District Six.

“The back door was open, the front door was open — they were never locked,” Janap recalls. “There were no burglars.”

“Coloured, white, black were staying together,” Niesa chimes in. “You could cook a pot of food at your neighbor’s house there.”

Then the apartheid government began passing the Group Areas Acts. In 1966, District Six was declared a white area. Blacks and coloured people were evicted.  Malay families like the Masoets were considered coloured in those days.

“We were lucky when they chucked us out of District Six because we could come and stay up here” in Bo-Kaap, says Niesa. “My father was caretaker at the school, and we could stay on the school grounds.”

Most of their friends and neighbors from District Six fared much worse. They were taken out of the city and dumped in barren settlements where they didn’t know anybody — places that suffer to this day from high rates of unemployment and violence. At least the Masoet family could cling together in a familiar place where they had friends and contacts.

The sisters found work, pooled their resources, shared food and childrearing. And their “coloured” designation gave them more privileges than people labeled “black” under apartheid.

Before I leave, Niesa shows me a beautiful coffee table book on Cape Malay cuisine. She and Janap are both featured. I barely recognize Niesa in her full-page photograph: She’s draped in a beautiful leopard-print headscarf with her face in profile. She has recipes for potato pudding, stewed dried fruit and ribbon jelly. Janap contributed a fish and cabbage stew recipe.

It’s a lovely book, but their love of cooking together goes back to family, not commerce.

“We are very close,” Niesa says. “Our mother put that closeness into us. She said we must look out for one another.”

So that’s what they do, even when they’re not working together.

“Me and her, we'll go to the waterfront, sit there, buy us some chicken and ice cream and we will just watch the world go by,” she says. “That’s what we enjoy doing.”

I’ll remember Niesa and Janap like that, watching the world go by. A world that seems to have changed many times over since those childhood days back in District Six.