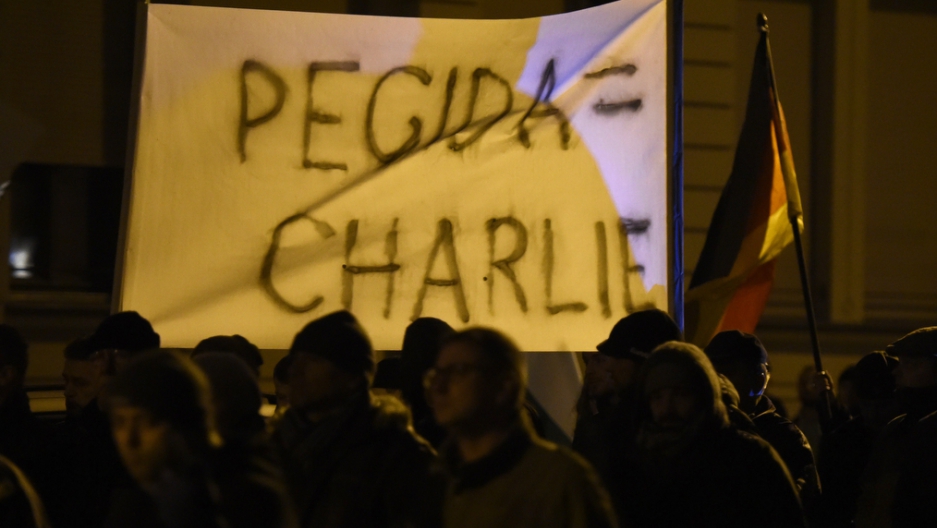 Protesters hold a poster reading 'PEGIDA = Charlie' during a rally in the eastern German city of Leipzig on Jan. 12, 2015.
Share

Thousands of supporters of a far-right populist group protested in Germany on Monday, claiming solidarity with the victims of last week's mass shooting at French satirical magazine Charlie Hebdo.

The latest rally by PEGIDA in the eastern city of Dresden had been expected to draw as many as 20,000 people.

Counter-demonstrations against the anti-Islamist movement were also held across Germany, attracting an estimated 100,000 protesters, DPA reported.

German Chancellor Angela Merkel, who has condemned the PEGIDA rallies, said she plans to attend a vigil organized by Muslim groups in Berlin on Tuesday.

"Germany wants peaceful co-existence of Muslims and members of other religions," Merkel was quoted as saying.

More from GlobalPost: Looking for neo-Nazis? There's an app for that

PEGIDA is an acronym for Patriotische Europaer Gegen die Islamisierung des Abendlandes, or in English, Patriotic Europeans against the Islamization of the West.

The group was founded by Lutz Bachmann, a burly graphic designer and activist in the eastern city of Dresden, in October 2014.

The organization opposes what it perceives as the growing influence of Islam over European countries as well as excessive numbers of immigrants and asylum seekers, and has been holding weekly rallies for the past three months.

Germany is no stranger to far-right movements, but it's the rapid rise in support for this particular group that has many people concerned.

The number of participants in the Monday rallies has gone from a few hundred to an estimated 18,000 at the last march, with smaller protests held in other cities. PEGIDA's Facebook page has gathered more than 133,000 likes.

It has found support among Germans worried about the increasing number of immigrants and asylum seekers arriving on their doorstep. Frustrated at the government's failure to stem the flow, they are turning to far-right movements such as PEGIDA to express their anger.

More from GlobalPost: Thousands attend rally against Islam and immigration in Germany

In a 19-point manifesto posted online, PEGIDA says it is “against radicalism” and “preachers of hate.” It also calls for stricter immigration controls and the “protection of Judeo-Christian culture.”

But it denies it is racist or xenophobic.

“Germany is not a land of immigration. Integration does not mean living side-by-side, but together on the basis of the Judeo-Christian merits of our constitution and our German culture with its Christian-Jewish roots, determined by humanism and enlightenment,” Bachmann has been quoted as saying.

As support for PEGIDA grows, so does opposition to the group, with people claiming to defend tolerance and diversity likening the movement to the Nazis. Senior politicians, including Merkel, have criticized the movement for fanning tensions and urged Germans not to attend its rallies.

Here's a timeline to help you better understand the rise of PEGIDA.

Dec. 15 2014 – A record 15,000 people march through the streets of Dresden in a rally organized by PEGIDA, fuelling concern about the growing support for the right-wing movement. One banner read: “No sharia law in Europe!”

On the same day more than 5,000 people attend a counter-demonstration in the city. A day earlier, more than 15,000 people marched against racism and xenophobia in the western city of Cologne.

Dec. 22 2014 – An unprecedented 17,000 supporters of the anti-Islamic group demonstrate in Dresden. Smaller rallies are held in Bonn, Kassel and Wuerzburg, but the number of participants is in the hundreds.

Dec. 31 2014 – German Chancellor Angela Merkel says the leaders of the far-right movement have “prejudice, coldness and hatred” in their hearts in her televised New Year’s address.

“I say to all those who go to such demonstrations: do not follow those who have called the rallies because all too often they have prejudice, coldness, even hatred in their hearts,” Merkel said.

Jan. 5 2015 – A record 18,000 people attend an anti-Islamization march organized by PEGIDA in Dresden. Pro-immigration demonstrations are held in Berlin, Stuttgart, Cologne and Dresden. The lights of the iconic Cologne Cathedral went dark in protest against the mounting right-wing protests.

Jan. 11 2015 – German Justice Minister Heiko Maas orders PEGIDA to cancel its planned March for Jan. 12, the first to be held since the mass shooting at the Paris offices of Charlie Hebdo. “The victims … do not deserve to be misused by such agitators,” Maas was quoted as saying.

Jan. 12 2015 – Tens of thousands of PEGIDA supporters are expected to turn out for a rally in Dresden, boosted by outrage following last week's massacre.