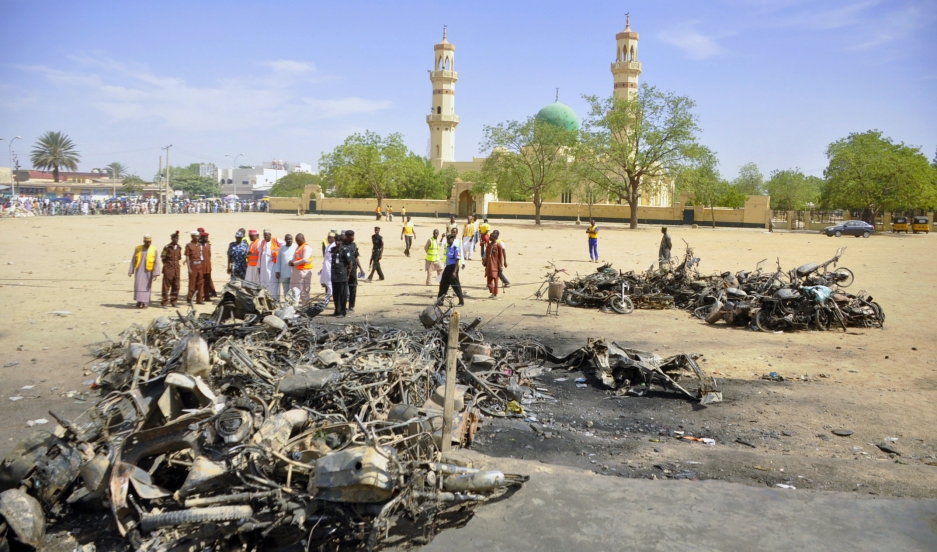 Police and emergency workers investigate a bombing scene in Kano, Nigeris, on November 29, 2014.

With the world focused on France after the Charlie Hebdo attack, some pretty shocking news from Nigeria got relatively little attention.

The country has endured a recent wave of violence, starting when the militant Islamist group Boko Haram attacked the town of Baga in northeastern Nigeria.

According to the BBC's Abdullahi Kaura Abubakar, the fighters started by attacking soliders at a nearby military base. "After overpowering them and forcing them to flee, the insurgents made their way into Baga, attacked it, took it over and went over to attack surrounding villages, leaving so many people dead," he says.

While it's difficult to confirm the numbers, multiple residents who witnessed the violence says as many as 2,000 people were killed.

And on Saturday, Abubakar says, "there was a female suicide bomb attack on the popular Maiduguri Market in the state of Borno" in which a 10-year-old girl acted as a suicide bomber, killing at least 16 people. A day later, two more female suicide bombers killed six people near a mobile phone market in Yobe state.

"Boko Haram is known to be behind most of the attacks, and the group says it wants to establish strict sharia law in the northeast part of Nigeria," Abubakar says. "Already it has captured and controls a vast piece of land overlapping the borders of the states of Borno and Adamawa, where it has already said it has established an Islamic state."

As for why the group is killing large numbers of civilians who haven't taken up arms against the Islamic militants, Abubakar speculates some civilians may have organized as vigilantes to help the Nigerian government fight Boko Haram and are now facing harsh reprisals.

Meanwhile, Nigerian archbishop Ignatius Kaigama called on the international community for support. "I see the very positive response of the French government tackling this issue of religious violence after the killing of their citizens," he told the BBC World Service. "We need that spirit to be spread around, not just when it happens in Europe, [but] when it happens in Nigeria, in Niger, Cameroon and many poor countries."

"That's how many Nigerians feel at the moment," Abubakar says, echoing the Nigerian archbishop’s comments. But he says the intervention Nigerians are hoping for is exactly the kind of direct actions Western countries are unlikely to take.

"Not just surveillance and training, they want to see world powers — including the US — bring their troops into Nigeria and take on Boko Haram because the insurgents seem to have overwhelmed the Nigerian military," Abubakar says. “Nigerians now seem so desperate that anything that can be done to bring an end to this insurgency, they will support."