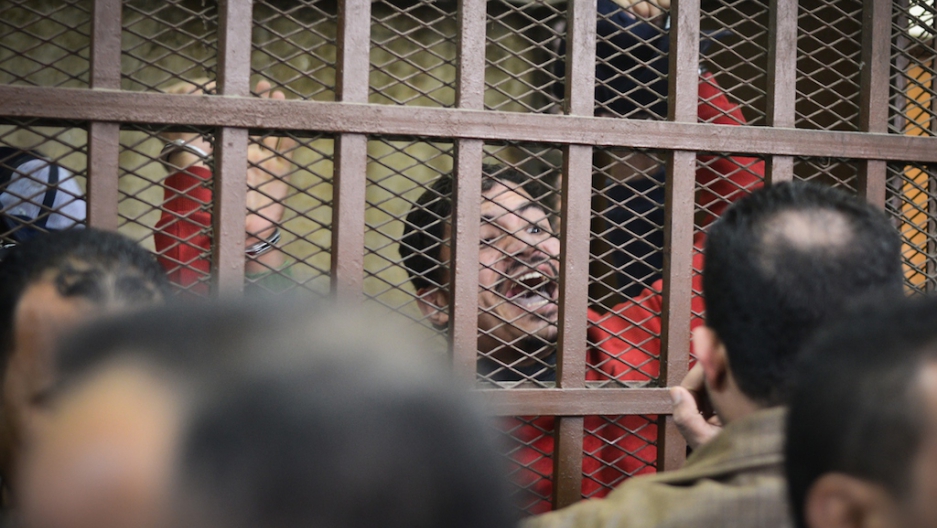 Defendants react behind the bars at a court in Cairo following the acquittal of 26 male men accused of "debauchery".
Credit: Mohamed El-Shahed
Share

CAIRO, Egypt — A judge in Cairo has acquitted 26 men who were arrested in a public bathhouse and charged with “debauchery” and “indecent public acts” — laws commonly used to prosecute homosexuality in Egypt.

The arrest of the men came against the backdrop of a worsening crackdown on LGBT citizens in Egypt, in which 150 people were arrested on similar charges over the course of a year.

The courtroom exploded with cries of “God is great” in Arabic after the verdict was read out. Some of the defendants cried; others waved from behind the bars of the cage they were held in as journalists rushed forward to photograph them.

“This is really unprecedented,” said Scott Long, a human rights activist living in Cairo and founder and former director of the LGBT program at Human Rights Watch who attended the trial.

“I think the fact that there was such an upwelling of outrage from among liberal activist Egyptians over this probably played a large part. It forced him [the judge] to look at the actual facts of the case.”

While homosexuality is not explicitly illegal under Egyptian law, homosexual practices have long been prosecuted under provisions in the law relating to “debauchery” and are considered taboo in the conservative society.

Families who had sobbed and wailed as the men were dragged into the court on Monday, desperately trying to cover their faces, broke into chants of, “To all journalists: they are men! They are men!” when the acquittal was announced.

The 26 were arrested in a bathhouse raid that is believed to have been initiated by a local TV crew, which broadcast the event after apparently leading the police to the building as part of an investigation into the spread of AIDS in Egypt.

More from GlobalPost: Egypt's new crackdown on the LGBT community includes a disturbing medical exam from the 1840s

“For the first time in the history of Egyptian and Arabic media, we lead the morality police to storm the biggest den for male group sex in the heart of Cairo,” said the trailer for the broadcast.

Photographs of the men in their underwear in the freezing Cairo night, their faces shown and no effort made to protect their identities, sparked fury in the Egyptian activist community and internationally.

“We won’t leave them alone,” said Amr, the son of one of the defendants, referring to Mona el Iraqi, the journalist who broadcast the raid, and Ahmed Hashad, the officer on whose word the case rested. He added that his family would sue them both.

The case is believed to be the largest arrest of LGBT citizens since the infamous Queen Boat trial in 2001, in which 52 were arrested on a floating nightclub on the Nile.

A few families said they had concealed their relatives’ involvement in the bathhouse case.

“There’s nothing to celebrate,” said Azza, a relative of one of the defendants, saying that she had not slept properly since the arrests.