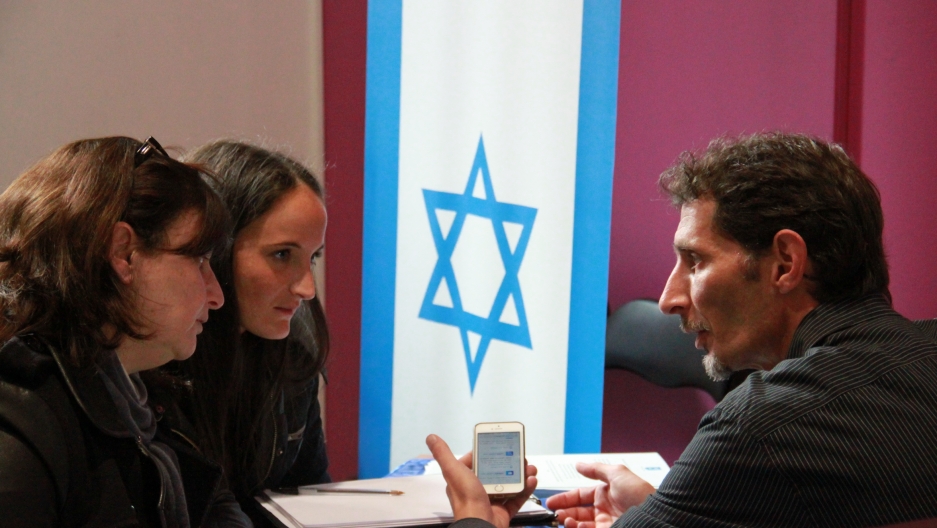 If you want to immigrate to most foreign countries, you practically have to beg. You go to the embassy, fill out forms and hope to get lucky.

But for French Jews in Paris, less than a week after the attack on a kosher supermarket, it was the other way around.

Nine government representatives flew in from Israel, set up a public expo and tried to encourage Jews to move to the Jewish state. One of the representatives took out her cell phone and crunched the numbers for an elderly couple: How much money would Israel give them if they made the move? About $7,545 for the first year.

Irene Douieb, a Parisian woman in a flowing black fur coat, listens to the sales pitch, but she doesn’t need much convincing. "I'm very worried about what’s happening," she says. She's worried about her children and her grandchildren, and she wants them to go to Israel with her.

2014 marked the first year that more Jews moved to Israel from France than from any other country  — 7,000 of them. Israeli authorities are expecting another 10,000 from France this year.

"I’m telling the people that Israel is their home, and we would like them to come and live in Israel," says Shay Felber of the Jewish Agency, a semigovernmental organization that encourages Jewish immigration. Felber flew to Paris this week to meet with Jews here. "We're also telling them they should come to Israel because they choose to, not because they are afraid."

But there’s no ignoring the fear after last week’s attack, and Israeli officials have very publically responded to that fear — as if the attack happened on Israeli soil. Prime Minister Benjamin Netanyahu instructed Israel’s Mossad spy agency to assist French authorities in securing Jewish institutions in France, and the Jewish victims of the attack are all being brought to Israel for a state burial in Jerusalem.

Netanyahu also attended a vigil on Sunday in Paris at the Great Synagogue, which canceled Friday night services for the first time since the World War II.

Netanyahu told French Jews that Israel was their home, but the issue of what constitutes "home" is the core of the dilemma for Jews here. The crowds greeted Netanyahu at the synagogue by chanting his nickname, Bibi. But when he finished, the crowds broke out singing the Marseillaise, the French national anthem.

French Jews may love Israel, but they love France, too. Even when Jews leave France for the balmy climes of the Middle East, many still can’t part with their fancy French fur coats. Myriam, a Parisian Jew whom I met outside the synagogue — she asked that we not use her last name out of fear — says she doesn’t think she’ll move to Israel. She loves her city and she loves her country.

But she admits something here has changed. "It’s not like we will leave France," she says. "But in a certain way, France has left me. They’ve just left me."