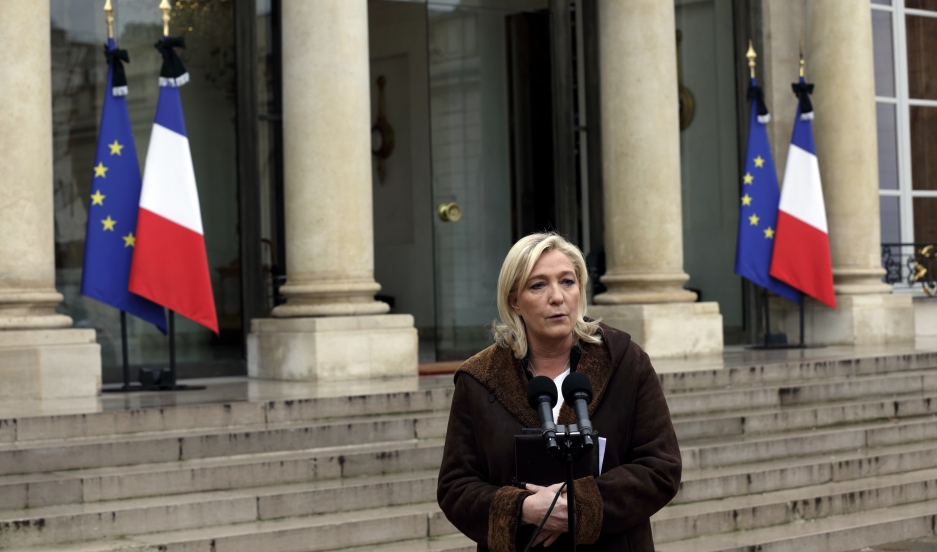 France's far-right National Front political party leader Marine Le Pen speaks to journalists as she leaves after a meeting at the Elyseé palace in Paris on January 9, 2015.

“This attack is probably the beginning of the beginning,” he said. “It’s an episode in the war that is being waged against us by Islamism.”

Jean-Marie Le Pen is no longer the leader of the National Front, his daughter, Marine Le Pen, has taken the reigns. And as New Yorker staff writer Philip Gourevitch notes, we may have reached Le Pen’s moment.

“You have a crisis where the [political] center in France is not responding to the fears and the angst and the suffering,” Gourevitch says. “Economic hardship, miserable employment prospects, all of these different social crises ... what [Marine Le Pen] has to say is corresponding with many of the grievances people have.”

This rhetoric is often centered around “rejecting European integration," Gourevitch says. “She says ‘We have lost our sovereignty as a country. We have lost control of our borders. We cannot actually impose our own immigration policy or monetary policy. We don't have our own currency. Our presidency is weakened. And we can't make our own laws if they go against the rules being made for Europe.”

This platform has struck a chord with many French, even people who support France’s mainstream parties. And that, Gourevitch says, is quite politically advantageous: “She's in a very strong position. She's been very successful at mainstreaming her party.”

And last week's attacks have only helped Le Pen. “When her father said ‘We’ve been predicting this for a long time, this is just the beginning of the beginning,’ what he didn’t say was ‘this plays beautifully into our hands,'" Gourevitch says. "That would have been gross for even him. But it was obvious. ... This was kind of an I-Told-You-So moment.”

And despite the list of world leaders and French politicians who joined huge rallies on Sunday against the attacks, Le Pen wasn't invited. “Not being invited — being excluded, that is— actually made her the center of attention, at least in the political press," Gourevitch points out.

"That gave her a kind of grievance and martydom, and the chance to say, 'See, here you have this hypocritical claim of unity at a moment of national crisis where, in fact, I and my millions of voters are being excluded. We’re not being recognized as having serious issues, when we're the only party that actually has no responsibility in creating the current constellation of troubles that has exploded here.'”

And while everyone know she's playing politics, Gourevitch says, "she's skilfull at it. And this is a moment that's ripe for her to exploit.”