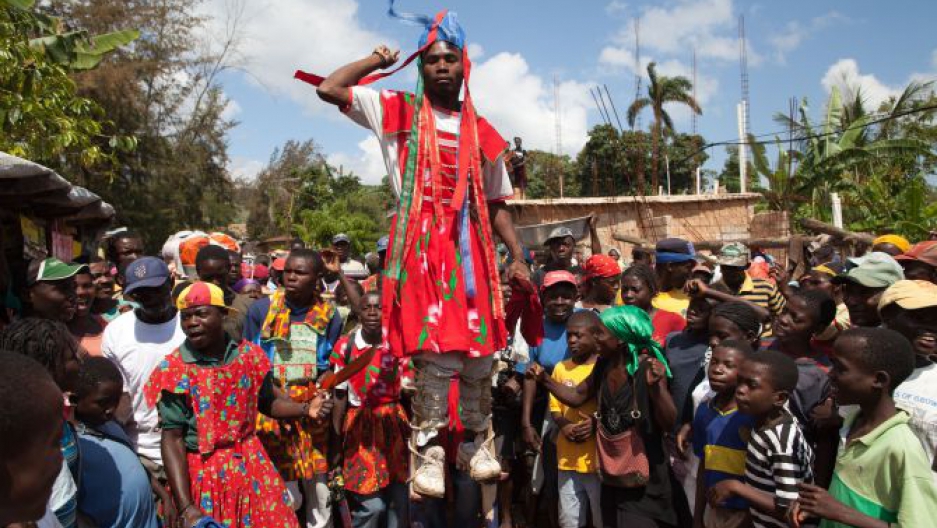 ILE-A-VACHE, Haiti — One day in October, 81-year-old Mascary Mesura was working in his garden of corn and coconut trees when the mayor of this small island off the southern coast of Haiti approached and told him to get out of the way.

“He said ‘the tractors are coming. We are going to build a lake to grow fish,'” says Mesura. “I asked for an explanation. I told him all the things we grow there. I was standing in my garden and he told the tractor to advance.”

The mayor, Fritz César, stood and watched while police handcuffed Mesura and his wife, forcing them to watch as their livelihood was uprooted, all 28 of their coconut trees toppled to make room for a fish pond to feed tourists.

The demolition was part of the Haitian government’s $260 million plan to develop Ile-a-Vache into a Caribbean tourism destination akin to the Bahamas or St. Martin.

Five years after a 7.0 magnitude earthquake ravaged an already troubled nation, Haiti’s leaders hope tourism along with mining, manufacturing and agriculture will help the country leave its legacy as an impoverished nation behind.

“The truth is that we are making tremendous progress,” President Michel Martelly said in a recent interview. But progress hasn’t come quickly enough to keep thousands of people from protesting in Port-au-Prince last month to call for Martelly’s ouster.

Expectations for the former pop-musician were high when he entered office in 2011. But a rift between President Martelly and parliament about oversight of elections has gone on for so long that legislators’ terms were set to expire this month with no one to replace them.

That would cause Haiti’s legislature to legally stop functioning, leaving President Martelly to rule the country by decree. But as Martelly continues to unilaterally implement his version of development, there’s one challenge in particular that seems poised to thwart it: Five years after the earthquake rattled Haiti, the ground remains perilously unsteady.

Land conflicts continue to plague nearly every sector and threaten to stall progress for years. Little of Haiti’s land is officially registered with the government land office, and it’s not uncommon to find a half-dozen people with claims to the same plot of land.

This creates major obstacles to attracting local and foreign investment in tourism and other industries requiring land. According to the constitution, Haiti’s government can’t sell land to foreigners without parliamentary approval. It can only lease it for a term of up to 50 years. For some investors, this isn’t a problem: Though they’ll never profit from the value of the land, they have half a century to profit from whatever they build on top of it.

But families who depend on land for subsistence farming and shelter are in a much more precarious position. When the earthquake displaced 1.5 million people, many found permanent or semi-permanent housing. But more than 80,000 remain officially displaced.

And if the state decides to expropriate private land, residents may be left homeless still.

Today, thousands of earthquake victims live under tarps north of Port-au-Prince on land that the Haitian government claims as its own but that may in fact still belong to a private landowner.

The government claims to have obtained this land years ago from a private landowner, but reports later indicated the landowner was never paid. If true, the deal may be void, and the landowner may yet have the right to reclaim his land from the families living there.

Already for those families, daily life remains much as it was in the chaotic days after the earthquake.

“We don’t have water, we don’t have electricity. We don’t have anything,” said Augustin Mona, who advocates for a group of families who moved to an area called Canaan after their losing their homes in the quake. Only “when we can have land can we stabilize ourselves.”

Paul Christian Namphy, a government water engineer who studied this particular case, explains how on two different occasions this group of families was forced off of the land on which they were squatting, once by a government official, another time by a wealthy landowner. The second time, “brute violence was used. There were people who suffered serious injuries,” says Namphy.

He says conflicts like this one over land are the result of a deeply unjust political system in Haiti, especially when it comes to choosing government officials like the ones behind the evictions of those families.

“What they created is a free-for-all where criteria of privilege, of favoritism, of nepotism fills in,” Namphy says. “Whoever has the power decides who gets to be mayor and all the privileges that come with it.”

Foreign donors have been unable to substantially improve Haiti’s dysfunctional government. The United States spent $3.1 billion in relief and development aid projects during the past five years, but no major US project addressed Haiti’s land crisis. As of the beginning of 2013, just 9 percent of US aid had passed through the hands of Haiti’s government leaders.

And yet at least one US ‘aid’ project required Haiti to dip further into its own meager budget to complete an unfinished job. In 2012, as part of its award-wining investigative series “Fault Line: Aid, Politics and Blame in Post-quake Haiti,” GlobalPost revealed that Haiti had to spend nearly $1 million of its own money to furnish a temporary building for Haiti’s parliament. The US touted reconstruction of the parliament building as a major aid project but never finished the job.

Also problematic is that less than 2 cents of every relief aid dollar disbursed by the US went directly to Haitian companies or organizations, according to the Washington-based Center for Economic and Policy Research. In 2012 GlobalPost found that foreign contractors were undermining local businesses and the very people that aid was meant to help.

Meanwhile, the US government continued to allocate millions of dollars to its favorite Beltway contractor, Chemonics, despite knowing the company was categorically failing to live up to its promises in Haiti.

Cholera, introduced in late 2010 by a negligent United Nations peacekeeping mission, has killed more than 8,000 people and infected hundreds of thousands more. Haitians are suing the UN for reparations, but the organization has yet to live up to its obligation to create a judicial body to hear the case.

When it comes to issues over land, foreign donors, who promised a combined $10 billion in aid after the earthquake, have allocated virtually nothing to land reform. But Mona, the Haitian advocate for displaced families, says that before people blame foreign donors for this mess, they must blame Haiti’s leaders.

And it appears the president is about to get stronger.

If Haiti’s legislature ceases to function this month after its members terms’ expire, Martelly would essentially be left with supreme power – a de facto return to dictatorship.

By all accounts, Martelly relishes this possibility.

“There is an article in the constitution which stipulates that when things go wrong, the president has to put things back in order,” Martelly told the German magazine Der Spiegel in an interview published in November. “It is as simple as that.”

Just three years after supporters of the then-presidential hopeful rioted in the streets of Port-au-Prince in defense of his candidacy, thousands are now. This time, it’s for Martelly’s ouster.

Back on the island of Ile-a-Vache, residents worry that the president’s vision of development favors tourists over Haitians.

“Since Martelly's government began, touristic development has been done without the participation of the community. Many people are angry,” said Amazal Jean Yvres, 40, who was mayor of the island until the central government appointed César in 2012 — the one who stood watch as tractors bulldozed Mesura’s fruit trees. “If the state wants to take the land, the first thing it should do is talk with those people who have been living and paying taxes on it for generations and generations.”

When Haiti’s government issued a decree reaffirming that the island technically belongs to the state, Ile-a-Vache’s residents protested.

But the choice of who inherits his home and land may not be his to make.

“Everyone knows that their grandparents used to own that land, but no one has any legal document showing that they did,” says Jean Patrick Lucien, who owns a small new hotel on the island.

Beyond conflicts over land itself, Lucien worries that islanders are unlikely to benefit from any of the major, resort-style tourism developments.

“There’s a fear that when you build these hotels, the only thing that they’re going to need are skilled laborers,” says Lucien, which most of the island’s residents are not.

In the last two years, dozens of Ile-a-Vache farmers have had their vegetable gardens destroyed to make room for a new airport for tourists.

Now, many more fear the land that they’ve lived and worked on for decades could also be taken away without warning.

“They talk about expropriation. If it doesn’t happen today it will happen tomorrow,” said Jerome Genest, 42. “Development is going ahead without us.”

This reporting was supported by a grant from the Pulitzer Center.