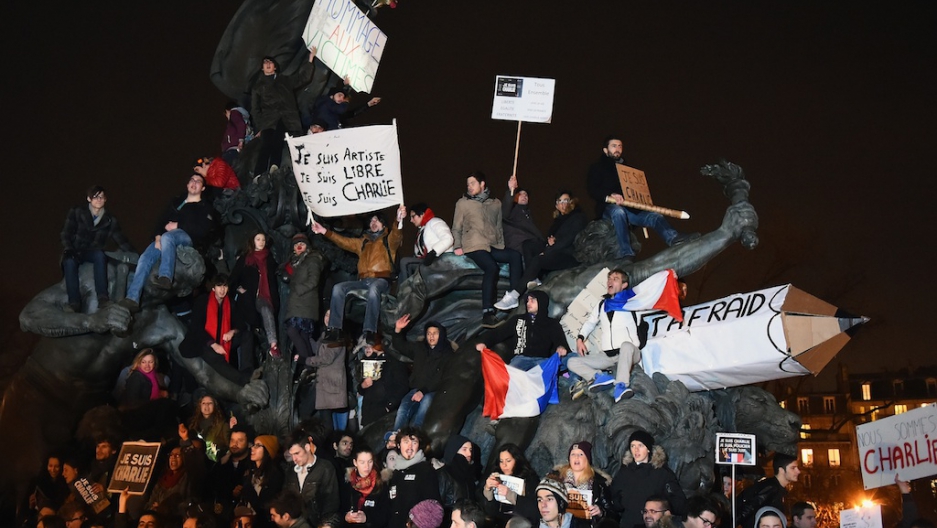 LISBON, Portugal — Perhaps one of the most chilling images of Europe's modern terrorist threat is in the cringeworthy video of Cherif Kouachi attempting to rap.

The hip hop career was a failure, like much of the pre-terror life of Kouachi, his brother Said, and Amedy Coulibaly, the brothers’ alleged accomplice in last week's attacks that killed 17 people in Paris. The three men, all in their early 30s, were killed during raids on Friday.

Yet the transformation of the Kouachis and others like them from punk underachievers into trained killers able to wreak low-tech havoc in a major Western capital has become the number one nightmare of Europe's security forces.

The alleged Paris killers' stories are all too typical. No good at school. A youth of petty crime and temporary jobs delivering pizzas, filling coca-cola bottles or cleaning streets for the Paris city council. Time in and out of jail.

"His profile is more that of a dope head from the projects, than of a radical Islamist," Cherif Kouachi's lawyer Vincent Ollivier said in 2005 after his client was charged with links to a group sending foreign fighters to Iraq.

"He smokes, drinks, doesn't wear a beard and has a girlfriend without being married."

When he was in his 20s things changed. The Kouachi brothers started to hang out with radical preachers in their tough Paris neighborhood and Cherif became involved with a network recruiting volunteers to fight US troops in Iraq. Ollivier told French media his client was easy prey.

Despite his radicalization, the one-time wannabe rapper was reportedly relieved when French police arrested him as he was preparing to board a plane to join Iraqi insurgents after minimal military training. Sentenced to 18 months for involvement in the jihadi recruitment ring in 2008, he emerged hardened from jail.

Cherif and Said both had weapons training with Al Qaeda in Yemen during 2011, officials from the country reportedly told Reuters on Sunday.

More from GlobalPost: Europe's bracing for backlash after Paris attack. Will it come?

The Parisian brothers' backgrounds are strikingly similar to those of Mehdi Nemmouche, a Frenchman awaiting trail for the killing of four people in May at the Jewish museum in Brussels; Mohamed Merah, who murdered three French soldiers, a teacher and three Jewish schoolkids in 2012 attacks in southwest France; and many of the hundreds of young European Muslims recruited to fight for radical groups in the Middle East.

Western security forces have been successful in thwarting sophisticated large scale Islamist terrorist incidents in Europe and North America since the 9/11 attacks in the United States, and subsequent bombings against public transport in Madrid in 2004 and London in 2005.

But over the past two years intelligence services have been increasingly concerned that small cells or lone wolf terrorists would be able to carry out high impact attacks.

The Paris shootings were the most deadly of a series that includes the Boston Marathon bombing that killed 3 in April 2013; the murder of a British soldier in London a month later; the attacks in Ottawa and Sydney that killed three late last year; and the murders in Brussels and southern France.

Assailants range from radicalized "amateurs," as many security experts have dubbed them, to those like Nemmouche, Merah and Said Kouachi, who are believed to have had their killing skills honed on the battlefields of the Middle East.

Either way, security officials say such single operators and tiny groups are the most difficult to track because they leave negligible intelligence footprints.

The number of European fighters joining the self-proclaimed Islamic State (IS) and other ultra-violent groups in the Middle East is estimated at around 3,000. Western experts fear that the scale of the threat posed by returning militants risks overwhelming intelligence services.

"We cannot sort through them or monitor them like we used to to discover their aims," warned Marc Trevidic, Paris anti-terrorism magistrate, in an interview last November in the newspaper L'Opinion. "We lack the judicial means to really investigate them, yet some of them are potentially dangerous, driven to waging an individual jihad."

The problem goes well beyond France. As the drama unfolded in Paris last week, governments in Britain, Italy, Spain, Belgium and other European nations warned citizens to brace for attacks.

"We face a very serious level of threat that is complex to combat and unlikely to abate significantly for some time," Andrew Parker, head of Britain's MI5 intelligence service, said in a rare public statement Thursday.

More from GlobalPost: Inside the troubled history of Britain's fight against extremism

He warned that Al Qaeda operatives in Syria were planning "mass casualty" attacks in the West and appealed for more resources for the security forces.

"My sharpest concern as director general of MI5 is the growing gap between the increasingly challenging threat and the decreasing availability of capabilities to address it," Parker said in London.

However, the UK’s senior policeman seemed to downplay the threat when speaking to Sky News on Sunday.

"I don't think [an attack] is likely but I think we all know it's a possibility — the threat level is severe and so therefore that means a terrorist attack is possible,” Metropolitan Police Commissioner Sir Bernard Hogan-Howe said.

European Union home affairs ministers agreed at an emergency meeting Sunday in Paris to step up the monitoring of air passenger data and enforce controls on the EU's external borders in order to better track extremists moving to and from Europe. They also called for greater cooperation from internet companies to report on extremist activity online.

Such measures have previously run into opposition from privacy advocates, but there are expectations tougher measures will be adopted in the light of the Paris attacks.

"I'm not opposed to the collection of data for security reasons, but we'll want proof that it's necessary," said Sophie In't Veldt, a Dutch liberal member of the European Parliament and prominent privacy campaigner.

Besides tighter monitoring and boosting security force resources, European nations are being urged to develop community policies to counter Islamist propaganda and reduce the risk that marginalized youth get sucked into terror networks.

Many of those joining the jihadist causes have little religious background. Some are recent converts to Islam; some are societal misfits lured into terror gangs by the prospect of power, excitement, and winning peer respect through violence.

However, if Islamist recruiters have found fertile ground among youth in the grim inner city quarters or deprived suburbs of French cities, the Paris attacks also threw up a powerful counter-message of Muslims, immigrants and other minorities successfully integrated into French society.

"He was killed by false Muslims. ... You cannot mix up extremists and Muslims. Madmen have no color and no religion."

Minorities were prominent members of the medical teams and police units deployed during the attacks. Supermarket employee Lassana Bathily, a young Muslim man from Mali, has been hailed as a hero for protecting customers at the Kosher store where he worked during the attack by Coulibaly — who also had Malian roots.

French media have also highlighted the stories of the alleged terrorists' victims as giving the lie to the jihadi narrative of hate.

Mustapha Ourrad, who grew up in an Algerian orphanage, came to France in his twenties and like his killers had a difficult youth. Self-taught, he turned to literature instead of crime, becoming an avid reader of philosophy and a copy editor at the Charlie Hebdo satirical newspaper. He was gunned down with his colleagues last week.

Clarissa Jean-Philippe, 25, a black woman from the French Caribbean island of Martinique, had just completed her police training when she was allegedly shot dead by Coulibaly as she dealt with a traffic incident in a quiet Paris suburb on Thursday.

Police officer Ahmed Merabet has become a symbol of French unity after his death was caught on camera by a witness to the Kouachi brothers' rampage. An Algerian-born Muslim, Merabet was shot in the head as he lay wounded in the street.

"Today, he is the face of the Republic," said Claude Bartolone, speaker of the French National Assembly.

Merabet grew up in a gritty Paris suburb. At 42, he had recently qualified as a detective, but was on a bike patrol when he drew his pistol in an attempt to stop the Kouachis' getaway from the site of the Charlie Hebdo massacre.

"He was killed by false Muslims," Merabet's brother Malek told a news conference Saturday. "I tell all racists, Islamophobes, anti-Semites, that you cannot mix up extremists and Muslims. Madmen have no color and no religion."

French authorities are hoping that such sentiments, together with the massive display of tolerance and national unity that drew up to 1.5 million citizens of all colors and faiths to a rally in Paris on Sunday — and hundreds of thousands more to gatherings in cities around France — will show the futility of future attacks and counter the spread of jihadi influence.

"Unity is our best weapon. ... We have to mobilize," President Francois Hollande told the nation in a televised address. "We have to be ready to reply to attacks with force when it's needed, but also with solidarity. We are a free people, we are not afraid and we will not give in to pressure."