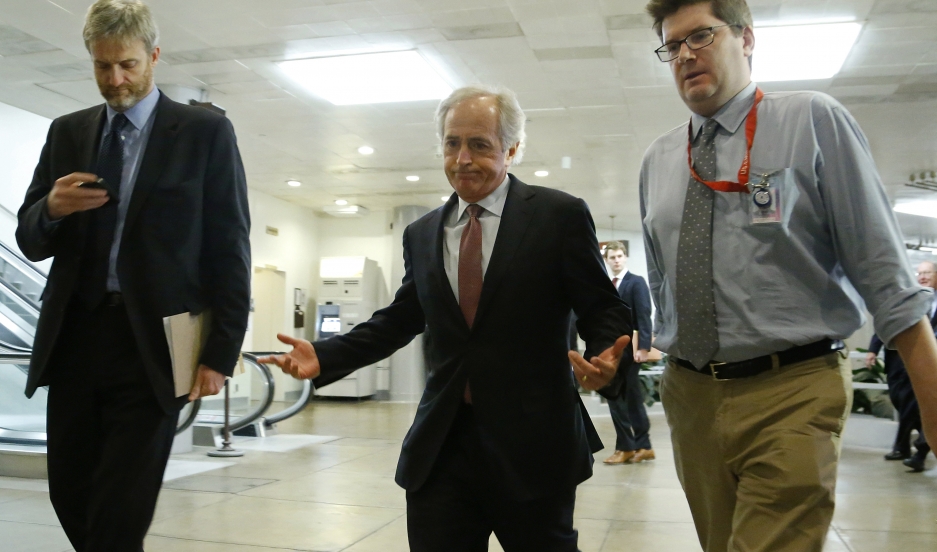 Senator Bob Corker (R-Tenn.) shrugs at a question from reporters as he walks to a closed-door briefing on talks with Iran in 2013. Corker is a leading proponent of raising gas taxes to boost the nearly-dry Highway Trust Fund.

Gas prices are the lowest they've been in five years — a welcome relief for many drivers.

But now that fuel prices are falling, some lawmakers are talking in a serious way about raising the gas tax — Republican lawmakers.

The debate is at an early stage, and it’s fair to say House conservatives will hate the idea. But a few powerful GOP senators are signaling they're open to the idea. Even House Speaker John Boehner, who personally opposes raising the gas tax, hasn't ruled it out.

“Some Republicans in the Senate are speaking up,” says Todd Zwillich, The Takeaway's Washington correspondent. “[They’re saying] oil prices are low, the federal highway trust fund is dead broke and will be in the future, we have crumbling infrastructure, and we absolutely need reform.”

The current tax on gasoline, which hasn’t been raised since 1993, sits at 18.4 cents per gallon — 24.4 cents per gallon for diesel fuel. The revenue generated from the gas tax goes to the Highway Trust Fund, which was was established in 1956 and is the primary way that federal highway and transit programs are funded.

Because national road infrastructure is crumbling, and the highway trust fund is in a perennial state of financial crisis, several Republicans say it's time to raise the tax that Americans pay at the pump to repair roads and bridges.

Senator Bob Corker (R-Tenn.) is proposing that the gas tax be raised six cents in 2016, six cents in 2017, and then be tied to inflation after that. But he’s not exactly calling it a gas tax.

Zwillich says GOP lawmakers like Corker are looking to rebrand the gas tax to avoid political backlash, saying that it is a “user fee” that drivers pay per gallon for using America’s highways, bridges and roads. But even that language change isn't a slam dunk.

“At the end of the day ... people aren’t going to jump out there and say they’re for a user fee,” Corker told Zwillich.

But though it’s a bit out of character for Republicans to get behind a tax increase, Corker told Zwillich that some GOP lawmakers are privately supporting a gas tax increase because people understand that the Highway Trust Fund and the nation’s infrastructure must “be dealt with.”

“[House Speaker John] Boehner and his spokespeople have said, ‘I’m against raising the gas tax,’” says Zwillich. “But he was asked specifically if it was off the table in any kind of tax reform deal and he has not ruled it out. That’s interesting. He could say, ‘That’s never going to happen,’ but he says, ‘I’m against it.’ And the term ‘user fee’ is important too.”

Sen. Orrin Hatch of Utah, the Republican chairman of the Finance Committee, the body that controls tax policy in the Senate, is also hoping to recast the gas tax in a new light.

“I think we’re going to change the rhetoric on that,” he says. “I would call it a user fee. I prefer not to increase taxes. To me that’s a user fee: People who use the highways ought to pay for them — that’s a small price to pay to have the best highway system in the world. That may be where we’ll have to go.”

In December, the US Department of Transportation noted that the highway fund was nearing insolvency. That's actually been the case for some time, but lawmakers are finally recognizing that something has to be done.

“Congress has been patching a hole in the Federal Highway Trust Fund,” Zwillich says. “It’s a deepening hole that Congress keeps shoveling money into. You could say that they could just stop doing that, but every district in every state in every locality in America has roads and bridges. There’s just no way to stop spending on it.”

Zwillich says Corker is pushing the gas tax as a way to permanently reform the trust fund — instead of just temporarily “patching the hole.” But other GOP lawmakers are pushing for other reforms that don’t include an increase in the gas tax.

“Let’s be honest: Even though Boehner hasn’t ruled it out, he’s going to get a lot of pushback from conservatives in the House — and that’s where tax policy is really written," Zwillich says.

Republican Congressman Devin Nunes of California, a member of the powerful Ways and Means Committee, doesn’t believe that the House of Representatives will raise the gas tax — at least not anytime soon.

“California has the highest gas tax in the country, and the last thing I want to do is raise taxes on people, especially those who are low income,” Rep. Nunes says.

So will there be a showdown between House and Senate Republicans? Zwillich says it’s possible.

“This is a really serious debate that’s starting, and it’s Republicans that are doing it,” he says. “I think this is all about timing. There is a major tax reform effort in Congress coming down the pike — it might be worth a trillion dollars or more. Republicans and Democrats are spotting the opportunity and think there’s no time like now. With gas at $50 a barrel, they think they have to move.”