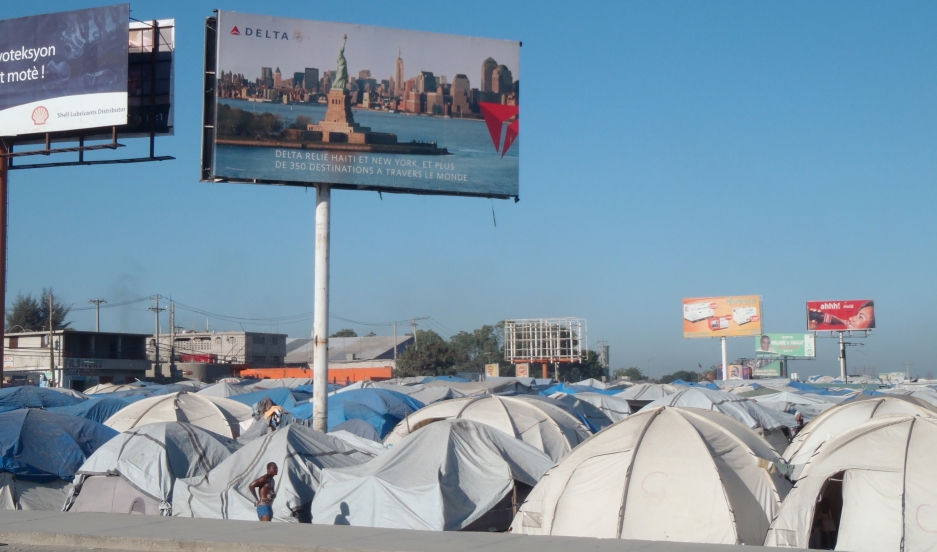 A Haitian tent city, juxtaposed with a billboard featuring the Statue of Liberty.

Editor's note: Laura Wagner is an anthropologist and novelist who survived the Haiti earthquake in 2010. She wrote the following with the assistance of Claudine St. Fleur, a Haitian writer who lost her aunt in the quake.

The clothes I was wearing when the house collapsed in the earthquake sit in a small suitcase in a friend's attic, unwashed in a plastic biohazard bag from the hospital in Miami. The blood and dust are stiff and dark and dull. I keep them to remind myself that it happened, to jar myself into remembering what it felt like, when the earthquake was real and we were in it.

I don't take them out very often — not because it upsets me to look at them, but because I worry that if I look at them too often, I will stop feeling anything at all.

Five years later, it is somehow a struggle to forget and a struggle to remember. In Port-au-Prince, you hear, “Nou pap janm bliye.'' "We will never forget.” And then you hear that it’s time to move on, that Haiti has to look forward, onward to a progress-and-development-filled future.

I lived in Port-au-Prince from 2009 to 2012 as an anthropologist and writer, and was there again for a few months this autumn and winter. Change has been both infuriatingly slow and dizzyingly fast. Day-to-day suffering and precarity change little, while the landscape transforms in the blink of an eye.

Americans always ask, "Are things in Haiti getting better?" This is an impossible question. What does “better” mean? The apocalyptic panic of January 12, 2010, has abated. The dust has settled. The dead are invisible now. Most of the rubble has been cleared. Far fewer people live under tents than did four, or three, or even two years ago. Vast colonies of candy-colored plywood houses  — so-called “transitional shelters” or “T-shelters,” meant to last a matter of months — have become predictably permanent, years after the camp toilets fell into disuse. More luxury hotels have popped up over the city; for three years now, the motto for foreign investors has been “Haiti is Open for Business.”

But the underlying, centuries-old problems that made the earthquake the disaster it was remain: Poverty, inequality, suffocating dependence on foreign aid, a state hamstrung by international interests. Fewer people under tents means more people in unregulated, crowded, informal cement housing.  When the next quake hits — when, not if — it will be incalculable disaster again. Everyday life ticks on and people go about their lives and jobs and loves, the Haitian state and the international community extol the promise of development — and the tectonic plates tighten like a spring under the surface of the earth.

In short, I cannot say whether things in Haiti are getting better.

A basketball court above a grave

An uncommonly kind woman named Melise Rivien died on January 12.  She was on the second floor; I was on the first floor. I made it out; she did not. The quake bound together Melise’s niece, Claudine, and me in ways we never could have imagined before the disaster. When I was in Port-au-Prince two weeks ago, we sat, under a darkening sky, eating tonmtonm with okra sauce from the street vendor at the corner of Rue Capois and Lalue. A block away, the newly rebuilt Triomphe cinema is all glass windows and gleaming façades, while next to it, an abandoned ice cream shop is still collapsed beams, peeling paint and exposed rebar, overtaken by vines. I asked Claudine, now a nursing student, what she is thinking about on the anniversary, and what she would like people outside Haiti to know five years later.

That day, the sun rose just as it does every other day, but it didn’t set the same way.  You might say it set earlier, because the country was all in darkness, and when the sun set, it set and took with it many souls and left many scars. It set and it took with it many futures, ravaged many homes, cast everyone out in the street, and left so much sadness in the heart of everyone who lived through it and who watched from beyond.

Some people say it’s as though the earthquake were all a dream. After five years, the same sun continues to shine, and people are doing the same things they always did, as though nothing ever happened at all, as though they’d swallowed some fruit of forgetfulness, because they’re still patching together cement homes, holding markets under slipshod housing, putting up houses everywhere and every which way. Even the state itself is cobbling together slipshod concrete houses, all pressed together with no room to pass between.

Claudine, like almost everyone in Port-au-Prince, lives in a slipshod concrete home on an overcrowded hillside. Being poor and obliged to live within systems she did not create, she has no choice. One can only remain tethered by grief and fear for so long. One can only remain under a tarp for so long. When the inevitable, guaranteed threats of living in a camp every day override the menace posed by another earthquake — infinitesimal today, but certain in the long term —  one moves back into the concrete house on the slippery hillside in a sliding land.

The shallow grave where they buried Melise and the others who died in our neighborhood was paved over by a foreign NGO within a year of the quake and turned into a basketball court.

Being in Haiti for Christmas again reminded me of the ordinary, gentle weeks before the disaster.

In December 2009, Port-au-Prince was decorated, with tinsel and lights, charming and beautiful but also surreal: glittering reindeer and snowflakes in the Antilles. Up and down Rue Panamericaine, young men sold fanal, intricate paper houses that Haitian families set out at Christmas. It was cool enough to walk around the city without sweating. Students were on vacation. People made sweet, thick kremas and argued about how much coconut it should have. The National Palace was lined with rows of twinkling lights.

On the Champ-de-Mars, people strolled at night — festive and relaxed, eating ice cream or hot dogs on a stick with a squiggle of mayonnaise. Young couples walked holding hands, laughing and joking and playing, coyly flirting, the boys in ironed jeans and buffed sneakers, the girls with earrings and glittery acrylic nails. The air felt different that season, filled with sweet anticipation, as though the city had been holding its breath for a long time and had at last let it out. I remember thinking, dreamily, that some kind of ordinary life could be returning to Port-au-Prince, after years of instability and violence. Maybe it is misplaced nostalgia for a Before that didn't know it was a Before, but so many people say they can’t remember a more beautiful Christmas in Port-au-Prince than that year’s. Less than a month later, the National Palace would be in ruins and the Champ-de-Mars would be a tent city of thousands. That is how surreal and sudden it was, how quickly and absolutely the entire world changed and the past erased.

By December 2014 the Champ-de-Mars was no longer a camp at all, but a massive construction zone, barricaded by red tin fencing as the plazas, statues and fountains are restored. Motorcycle taxi drivers festooned their motorcycles with shimmering garlands. On the hillsides above Pétionville, the government has painted the slipshod clustered cement houses, no more structurally sound than before, with vibrant tropical colors. Oranges and turquoises and pinks, visible not from within the shantytown, but from the hotels and cafés that overlook them. Haiti will be beautiful again, people say, and tourists will come and invest.

When it doesn’t seem tangible anymore — when the earthquake feels like a dream, in Claudine’s words — it is a perverse relief when some forgotten scrap of memory comes back and makes it real again. Being in Port-au-Prince this December reminded me of this from the disaster:

By the time they pulled me from the rubble, it was already dark. The house was collapsed; the street was collapsed. People were bloodied and chalk-white with cement dust. The familiar world was unrecognizable. We sat on the tumbled ground and listened to distant cries and prayers, wondered if everyone we knew had died, knew that Melise had died, and knew that we could do nothing.

It was cold and very dark. Suddenly, unearthly, sporadic lights began to flicker. I thought they were flashlights, and yelled, "Someone is coming! They’re coming to rescue us!" I did not yet know what I know now, which is that ordinary Haitians would be, more than anyone else, their own salvation that day.

"No,” someone said. “Nobody is coming. It’s the Christmas lights."

It was one of countless tiny tragic stupid absurdities. The city had collapsed. Melise was dead by then, crushed under the cement and wrought iron, not more than 10 feet away. But those colored Christmas lights, marching resolutely to the rhythm of their own tiny timer and battery, twinkled obliviously all night.