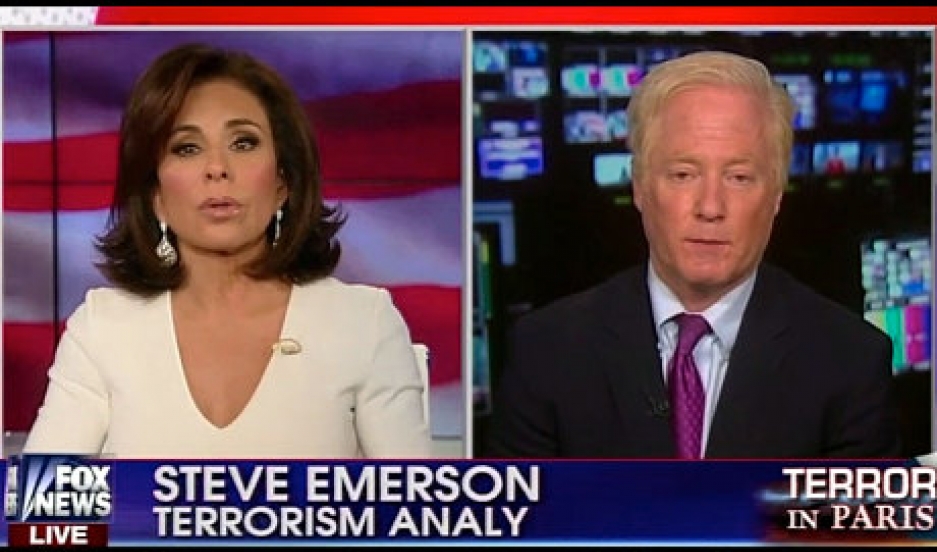 Security "expert" Steve Emerson appeared on the Fox News cable channel on Sunday to weigh in on the recent terror attacks in Paris. And as he warned viewers of the radical Islamist dangers of Europe, Emerson stated that the British city of Birmingham was “totally Muslim.”

"There are actual cities like Birmingham that are totally Muslim, where non-Muslims just simply don't go in," Emerson said. He also claimed that in parts of London, “Muslim religious police” beat and injure “anyone who doesn't dress according to Muslim religious attire.”

Emerson, an author whose website describes him as a leading authority on Islamic extremist networks, quickly tweeted an apology, saying his comments were "totally inaccurate." But it was too late to stop the huge reaction on social media.

Hundreds of thousands of people used the hashtag #FoxNewsFacts to "reveal" their own satirical signs of Islamist domination in Birmingham.

“The first reaction to what that man said was obviously anger from a lot of British people, particularly people in Birmingham,” says Guardian journalist Simon Ricketts, who created the hashtag. “Anger can get slightly corrosive and it can get nasty, so one of the best ways to react to something so laughable is to laugh.”

Ricketts says that one of his favorite tweets is this one about famous Birmingham band Duran Duran.

It started in Birmingham in the eighties with bands that radicalised young people like 'Koran Koran' #FoxNewsFacts pic.twitter.com/GtnEFIBoVl

Another Twitter user posted a photo of a building covered in a scaffolding "burqa."

Muslim leaders in Birmingham required the building wear a Burka since it's round shape was to feminine #foxnewsfacts pic.twitter.com/updBhZ2du6

There were also burqa jokes about Britain’s Queen Elizabeth II.

In the UK, the Queen must wear a headscarf by law when she visits Birmingham. #foxnewsfacts pic.twitter.com/SLkb3sx5rw

And even about jam jars.

Jam jars across the Britain have to wear hijab in order to be halal. #foxnewsfacts pic.twitter.com/7HD1VnG1Zn

British Prime Minister David Cameron said that he “choked on his porridge” when he heard about Emerson's claims. "This guy is clearly a complete idiot," he said.

Official figures show that the number of Muslims in Birmingham, Britain's second-largest city, numbered at 234,411, or 22 percent of the city's population. That compares to 494,358 who described themselves as Christian.