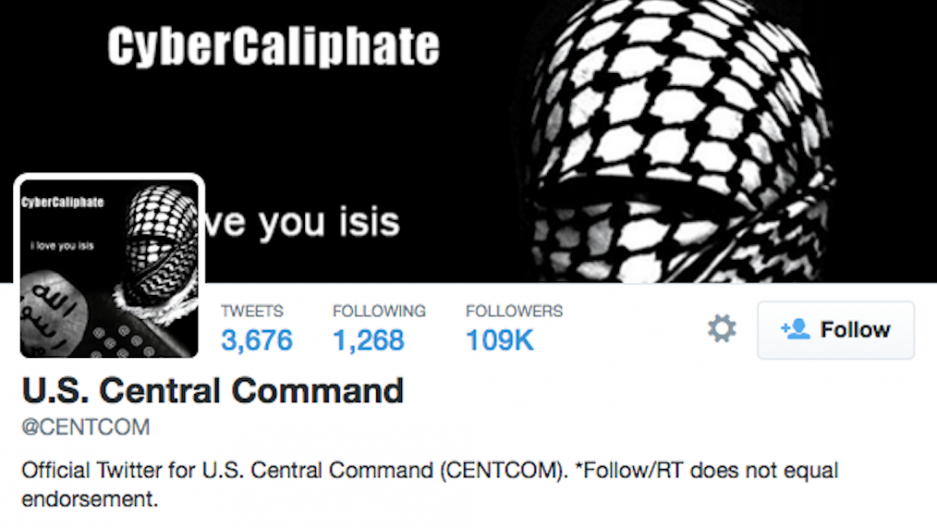 Hackers claiming to be Islamic State (IS) supporters hijacked the YouTube and Twitter accounts of the United States military’s Central Command, or CENTCOM, on Monday, posting images, videos and messages about military strategies and personnel.

“In the name of Allah, the Most Gracious, the Most Merciful, the CyberCaliphate continues its CyberJihad,” one of the tweets by the hacked @CENTCOM read.

CENTCOM oversees operations in regions including the Middle East, where the US and allied forces are battling IS, also known as ISIS or ISIL, after the violent extremist group took over large parts of Iraq and Syria.

Beginning at roughly 12:30 p.m. EST, the hackers emblazoned CENTCOM’s Twitter account with IS imagery and started posting what the hackers claimed to be personal information of top US military leadership including Gen. Keith Alexander, the former Cyber Command and National Security Agency (NSA) head.

The documents listed Alexander as the NSA’s director, suggesting they were created and perhaps obtained before Alexander announced his retirement last October.

The hackers also uploaded two videos to CENTCOM’s official YouTube account — “O Soldiers of Truth Go Forth” and “FLAMES OF WAR ISIS VIDEO.” Both videos depict what appears to be IS combat victories as well as English-language propaganda. “Flames of War” appears to be a trailer for a feature length recruitment film released late last year.

Shortly before 1 p.m., images including the text “I love you ISIS” were taken down and replaced by default images. CENTCOM’s Twitter account was suspended shortly thereafter.

"American soldiers, we are coming, watch your back. ISIS," read one of the tweets.

Several of the tweeted images of documents marked “classified” are easily found posted to public websites. (Some examples include nuclear facilities and the FAS North Korea Country Handbook.)

But the hackers also posted personal information of a number of active and retired US military officers. It’s unclear if the addresses included there are current or if they belong to a home or office.

Government officials told NBC News that the Twitter and YouTube accounts are not classified, and that none of the information posted by the hackers was actually classified. But the names and contact information are "official use only," they said.

“This is clearly embarrassing but not a security threat,” a US Defense Department official told NBC.

The hacks were carried out while President Barack Obama was to deliver a speech at the Federal Trade Commission laying out “next steps in a plan to improve confidence in technology by tackling identity theft and improving consumer and student privacy,” according a White House schedule of the talk.