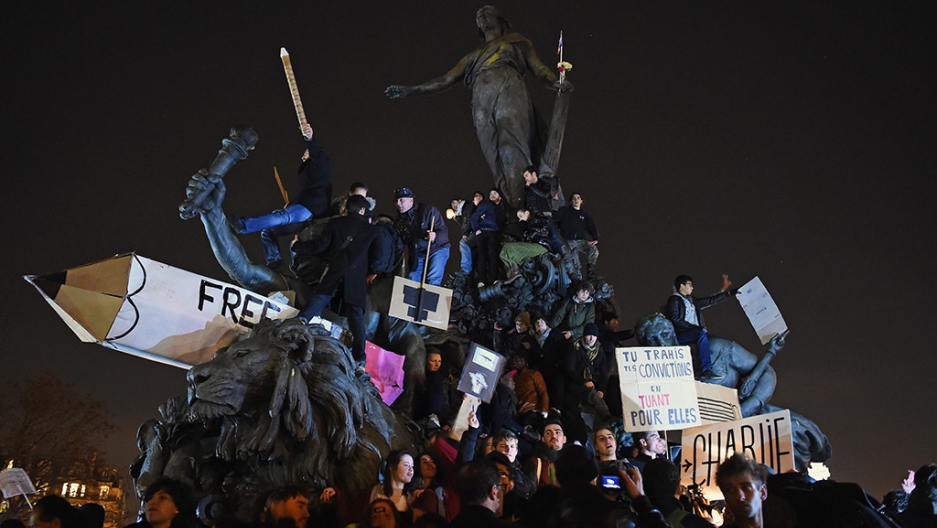 More than 40 world leaders, including the heads of state of Israel and the Palestinian Authority, locked arms in the largest demonstration in France since the World War II liberation of Paris from Nazi Germany. President Obama was noticeably absent, but still it was an inspiring display of international solidarity in the face of terror and fear. And it was an historic moment in the struggle to protect journalists and defend freedom of expression around the world.

The march was watched globally and triggered locally by outrage against radical Islamic terrorists in Paris who on Wednesday stormed the satirical weekly magazine Charlie Hebdo, bursting into an editorial meeting, calling out journalists by name and then executing them. Two days later another attack struck a kosher supermarket.

The twin events caused panic and fear in Paris last week as a manhunt for the suspects in the Charlie Hebdo shooting spree ended with two brothers of Algerian descent, who claimed to be trained by Al Qaeda in Yemen, cornered and killed in a Paris suburb on Friday. The final death toll for the week of violence was 17.

The two brothers, Cherif and Said Kouachi, had carried out a well-planned and premeditated killing of the messenger in the aftermath of a summer in which three American journalists held by the self-proclaimed Islamic State in Iraq and Syria (ISIS) were beheaded in executions streamed over the internet.

If it wasn’t clear before, it should be now that the dark forces of the Islamic State and Al Qaeda have opened a new front in their attack against Western values: They are directly attacking journalism.

Islamic militants, terrorism experts say, are trying to silence the voices of those who criticize through satire, and they are trying to strike fear in those who go into the field to report on violent insurgencies waged in Iraq, Syria and elsewhere. The intensity of the pundits on television news shows this weekend made it feel like Europe and the West are careening toward a global clash of civilizations, a truly Huntingtonian moment.

News flashes from the demonstration were juxtaposed against faces of the Islamic militant attackers and news of an unprecedented spree of attacks by the Islamic militant group Boko Haram in Nigeria, which purportedly killed 2,000 people. The details of this rampage are scant because there are so few Western or local journalists on the ground due to the peril involved in covering this organization.

Amid the last week of fast-paced violence from Paris to northeast Nigeria, this week feels like a moment to slow down and ponder these attacks and the wider assault on freedom of expression.

My hope is that the next phase of news coverage will contextualize the events, remembering that the climate of fear and anxiety these attacks produced in Paris are played out every day in places like Iraq and Syria. The French have militarized their response with 10,000 security forces deploying on the street and deadly force unleashed upon the Charlie Hebdo and supermarket attackers.

The same week as the Paris attacks, a blogger in Saudi Arabia was flogged; he was sentenced last year to 10 years in prison and 1,000 lashes, 50 per week for 20 weeks, for criticizing the government. In Egypt, three journalists from Al Jazeera remain jailed on trumped-up charges for doing their job reporting on the events of the summer of 2013, when the military junta cracked down on the Muslim Brotherhood — killing hundreds of protesters and carrying out a coup to overthrow the democratically elected government.

The Western media too often turns a blind eye to the murder of journalists globally, and the oppression of journalists from the Middle East to Russia and China. How we respond now is critical. Responding to terrorism always involves balancing security and other rights, such as privacy, freedom of expression and freedom of religion, but seldom has it felt more fateful to get that balance right.

It would compound the tragedy of Paris if the lasting legacy of the Charlie Hebdo massacre failed to galvanize concrete action to protect press freedoms, or even worse led to a further undermining of privacy and freedom of expression rights.

My hope is that we will honor the martyrs — and I think the journalists killed in their newsroom were definitely martyrs — by finding that critical balance between counter-terrorism strategies and our collective human right to freely express our views.

Indeed, if this attack in Paris doesn’t wake up complacent democracies to the need to vigorously defend the right to report, nothing will.

In 2011 when Charlie Hebdo’s office was destroyed in a firebombing, the editor-in-chief Stephane Charbonnier was not killed, but he was defiant.

This time Charbonnier was killed by the assailants. The words he offered to Le Monde back in 2011 in response to the firebombing resonate more powerfully than ever:

“I’d rather die standing than live on my knees,” he said.

More from GlobalPost: Global news community stands its ground against a 'new war on journalists'