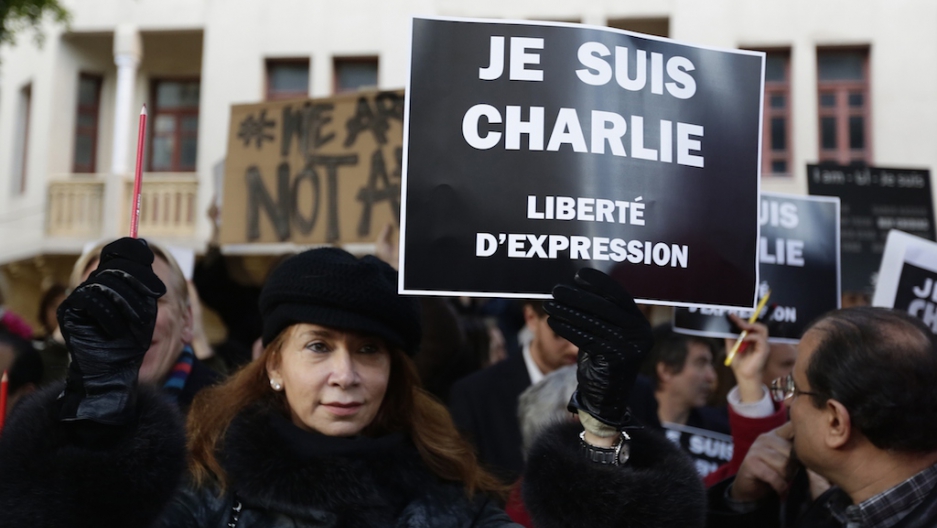 A Lebanese woman holds up a poster reading "Je suis Charlie (I am Charlie), Freedom of speech" on January 11, 2015 during a rally on Samir Kassir Square in downtown Beirut to honour the slain Charlie Hebdo cartoonists and the other victims of Islamist attacks in Paris.
Credit: Anwar Amro
Share

BEIRUT, Lebanon — It was fitting that Lebanon’s own rally in support of the murdered Charlie Hebdo journalists took place in Samir Kassir Square.

The small park in downtown Beirut, lined with trees full of birds surrounding a fountain, takes its name from a Lebanese journalist who was assassinated in 2005. He was killed by a bomb placed under the driver’s seat of his car, parked outside of his home in the east of the city.

Kassir was not a satirist, but he was an outspoken opponent of the Syrian occupation of Lebanon and an advocate of free speech. He was threatened and harassed by the authorities for years before he was killed.

And he was not the only one. The names of other journalists killed in Lebanon’s recent history could be seen on placards in the park on Sunday.

So it was with a sense of familiarity that people gathered at dusk holding signs bearing the words "Je Suis Charlie."

“Our history is full of similar experiences, so we totally relate to what has happened with Charlie Hebdo,” said journalist Carol Malouf. “We may not agree with their cartoons, but as the saying goes: ‘I will defend to the death your right to say it.’”

Kid stands with names of murdered Lebanese journalists at #jesuischarlie rally in #Beirut.

The rally was organized by Ayman Mhanna, executive director of the Samir Kassir Foundation, an organization established in the journalist's memory.

“We know what it means to lose life in defense of ideas and freedom of expression. Terror knows no borders in targeting journalists, so it’s normal that a response comes from around the world,” he said.

“We are also holding this is for all the people [who are] using ‘but’ — adding qualifiers in their response, and trying to justify the attack in some way. Every time we give even the beginning of a justification for violence against journalists, or against free thinking in general, even with the best intentions, we are laying the foundations for other crimes in the future.”

Mhanna noted that freedom of speech in Lebanon is still under threat.

Samir Kassir statue looking down on the #jesuischarlie rally in #Beirut.

The rally was attended by a few hundred — a reasonable showing. But Lebanon has not been immune to the debates taking place elsewhere about how best to respond to the events in Paris.

There were those who could not bring themselves to attend an event in solidarity with a magazine that published what in their view was offensive, even racist, material.

“Charlie Hebdo is a magazine that regularly publishes racist cartoons. It does not help in any way to build communication between Muslim immigrants and other communities in France. Just because the magazine was horrendously attacked does not mean that we are supposed to sanctify it,” said one person commenting on the Facebook page for the rally.

Others pointed out that Lebanon faces violence on a similar scale all the time. Where were the rallies and hashtags for victims of terror at home?

Since the beginning of the Syrian civil war, Lebanon has struggled to deal with the fallout of the conflict spreading across its shared border.

The involvement of the Lebanese Shia group Hezbollah on the side of President Bashar al-Assad has made the country a target for jihadist groups from Syria — who have targeted Shia civilians with bombs here in Beirut.

The Lebanese army, too, has fought with Jabhat al-Nusra — the Syrian branch of Al Qaeda — and the Islamic State as both groups attempt to gain a foothold in the mountainous Lebanon-Syria border.

Just a day before worldwide marches in solidarity with France, a suicide bomber struck at a cafe in Tripoli, northern Lebanon, killing nine.

While attending the march in Paris, Lebanon's foreign minister, Gibran Bassil, touched upon the subject.

"We feel with the plight and pain of the French people. We are here with them today in this anti-terror march because France is considered an international platform for expression," he said. “We have a Charlie every day in the Lebanese Army and the Lebanese media and in the Lebanese family, and in every church and mosque.”

The attack in Tripoli was claimed by Jabhat al-Nusra.

By the evening, pictures bearing the hashtag #JeSuisTripoli were appearing on Facebook.