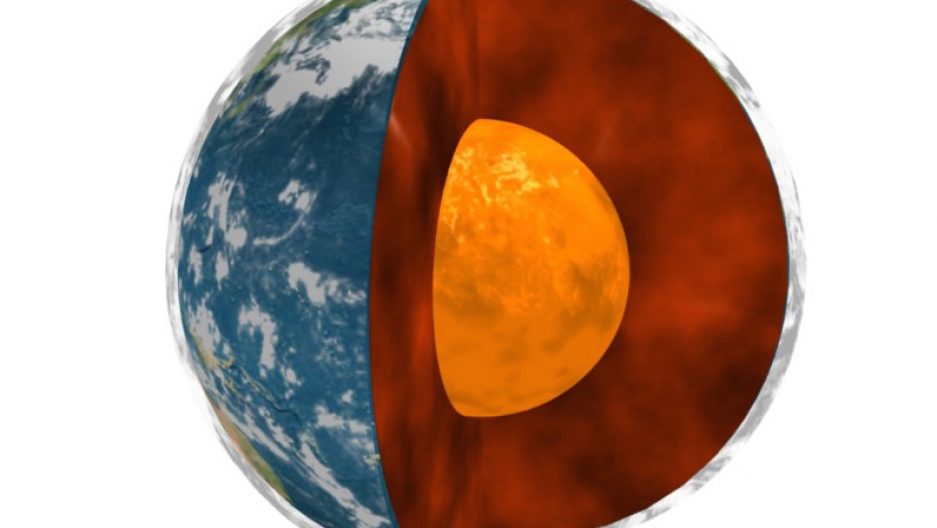 A NASA graphic illustrating the interior of the Earth.

Apparently it doesn't take Moses to make water from rock.

Scientists have long believed that icy comets brought water to Earth. But Dr. Wendy Panero, an associate professor of earth sciences at Ohio State University, says Earth's water may have been here all along, locked up in the planet's rocky mantle — and there may still be lots of water still trapped there.

Panero explains that it's not water as we think of it: It's neither liquid nor in the form of water molecules, the H2O we all know. Instead, the hydrogen and oxygen atoms that form water are stored separately in certain minerals within Earth's deep interior. And under certain circumstances, those atoms will recombine to form liquid water.

Panero’s group looked at the Earth’s mantle down to about 750 kilometers, or about 460 miles, and calculated that about an ocean’s worth of water can be stored in that depth.

What this means, Panero says, is that the mantle is part of the Earth’s water cycle. Most of us learned in middle school earth science that the water cycle is the process of evaporation, condensation and precipitation. Now we can add the geochemical processes that occur within the Earth’s mantle to that cycle.

“When we look into the origins of water on Earth, what we’re really asking is, 'Why are we so different than all the other planets?” Panero told the Ohio State University Press. “In this solar system, Earth is unique because we have liquid water on the surface. We’re also the only planet with active plate tectonics. Maybe this water in the mantle is key to plate tectonics, and that’s part of what makes Earth habitable.”

Plate tectonics are a consequence of the natural convection process that occurs in the mantle. As the mantle transfers heat from the Earth’s deep interior up to the surface, any water in that rock will recombine and come out, either into the oceans or into the air in steam form.

It works in reverse, too. As the Earth’s plates subduct down into the interior, they bring water down with them. The vast majority of that water is lost very near the surface during that subduction procese, but Panero says it's difficult to figure out how much water those rocks can carry with them farther down into the Earth.

Panero’s group perform their experiments in a device called a Diamond Anvil Cell, in which the tips of two diamonds compress rock samples to very high pressures. Then they use a laser to heat up the sample. This process essentially mimics the processes that occur on a much larger scale in the Earth's mantle.

“We are making measurements that are based on the distances between atoms and then [we] scale it up to the entire planet,” Panero explains.

Panero says her research isn't denying or replacing the comet theory altogether. “Ultimately, we need to come to an understanding of the Earth's formation and evolution that brings all the pieces of evidence together,” Panero says. “I think we're going to find that some of the water formed [on Earth] and some of the water that the Earth has now was delivered later in comets.”