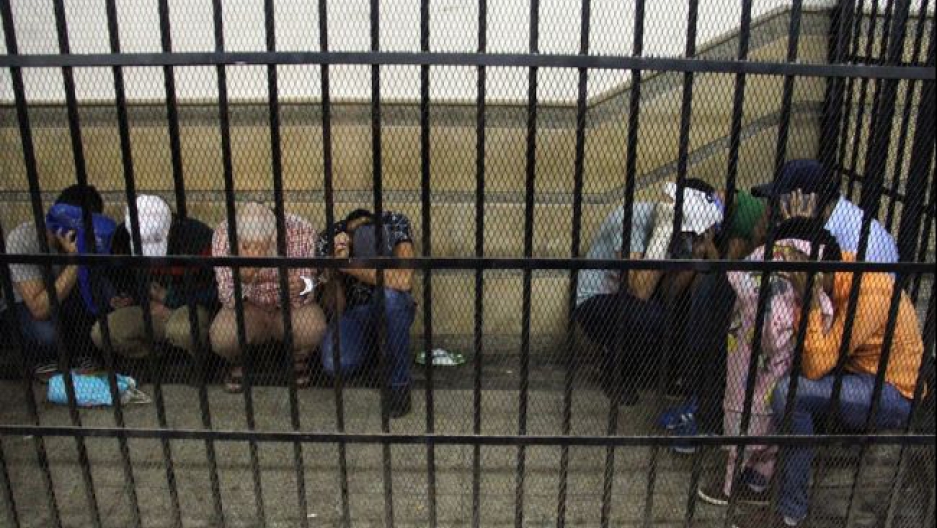 Eight Egyptian men during their trial for appearing in a video prosecutors claimed was of a gay wedding, on November 1, 2014.
Share

CAIRO, Egypt — On a bustling crowded market street in Cairo packed with storefronts selling wholesale flour and cigarettes, there is a small green door sealed with red wax. It is an ominous sign — it means that the police have been here and that the place is closed until further notice.

This particular door marks the entrance to the Bab el-Bahr hammam, whose name means “Door to the Sea.”

One night in December, officers from the police and Central Security Forces burst into this traditional bathhouse and arrested the 26 people inside, including all the staff, down to the man whose job it was to make the tea.

The men are currently on trial facing charges of “habitual debauchery” and “indecent public acts," among others; bywords in Egyptian law for the prosecution of homosexuality.

While nothing is known about the sexuality or sexual practices of those arrested, the raid represents one of the most serious escalations in a worsening crackdown over recent months on the LGBT community in Egypt — a group that has long faced discrimination from the state.

Since November 2013, about 150 people have been arrested on charges related to “debauchery,” according to Dalia Abd El-Hameed, gender and women’s rights officer with the Egyptian Institute for Personal Rights.

A notable case came in November last year, when eight men were sentenced to three years in prison for appearing in a video that purported to show a gay wedding.

There are many theories as to why the state is going after the community now.

“With no social sympathy with them they are an easy target for the police so they would be gaining points by arresting them,” says Abd El-Hameed.

Ahmed Hossam, a lawyer for the majority of the defendants in the bathhouse case, says that at a time when Egypt is in political and economic crisis, it’s a case of “look at the bird” — the state wants to create a distraction.

Egypt has a history of persecuting the LGBT community. One infamous raid in 2001 saw 52 men arrested on a floating nightclub called the Queen Boat. In 2004, authorities targeted gay men by entrapping them on the internet.

The community faced persecution under long-serving former president Hosni Mubarak, but now the sentences are longer and they are tending to stick, when once they were routinely overturned on appeal. In a recent case, a person found guilty was given 12 years in jail.

Even in what was arguably the freest time in the post-revolutionary period, there was little hope in the LGBT community that anything would change for them anytime soon.

“The groups that existed [then] were not thinking in terms of political or legal change, they were thinking in terms of just building a community, helping people feel better about themselves, helping them deal, giving them support in dealing with the kinds of day-to-day problems that most LGBT people were facing,” says Scott Long, a human rights activist living in Cairo and founder and former director of the LGBT program at Human Rights Watch.

Compared to previous crackdowns, though, the bathhouse raid stands out.

The raid itself is believed to have been initiated by a local TV crew, which broadcast the entire thing after apparently leading the police to the building as part of an investigation into the spread of AIDS in Egypt.

“For the first time in the history of Egyptian and Arabic media, we lead the morality police to storm the biggest den for male group sex in the heart of Cairo,” said the trailer for the broadcast.

What came next was even worse.

The practice can be traced to a French medical writer from the 1840s named Auguste Tardieu.

The practice persists in Egypt in 2015, despite the very doctors who use the test questioning its effectiveness.

“It’s known that it’s not 100 percent accurate,” says Dr. Hazem Hossam, a doctor with the Forensic Medical Authority. “And of course, if they are innocent, then the test will have a negative psychological effect.”

In this case all but three of the defendants were found to be “unused” — the term used by the court — and in the remaining three cases, the findings could be signs of other medical conditions, say doctors.

With the grim tests giving prosecutors nothing to go on, the main evidence in the bathhouse case is the word of one police officer. In the initial police report seen by GlobalPost, Ahmed Hashad, a colonel in the morality department of the police, describes in lurid detail what he saw when he and his men burst in.

“It’s as though when he entered the bathhouse, someone hit pause on the video” said Hossam, the lawyer.

He cast doubt on the officer's account, which describes in detail particular sex acts and names of who was doing what with whom at the moment when masked gun-wielding members of Central Security burst into the bathhouse.

Analysts say that evidence in such cases is often irrelevant, anyway, and that the judge often pronounces the verdict based on whether or not the person looks effeminate or “gay” to them.

The penultimate session of the trial began on Jan. 5, when the 26 defendants were dragged into the courtroom handcuffed to one another, heads down, many covering their faces with hoodies or scarves to conceal their identities.

A verdict is expected on Jan. 12, but even if the men are found innocent, much of the damage has already been done.

“If they haven’t been convicted they would be socially convicted,” says Abd El-Hameed. Those who can often seek asylum or work outside the country after such an event.

“It’s a devastating, life-changing incident. Many are immediately fired from their work, many of them are kicked out of their homes,” she adds.

“Scandal will follow them their whole lives even if they are found innocent,” says Khalifa, who has worked on many LGBT cases.

While some of the families come to the courthouse to show their support, for most, their lives will never be the same.

One of the female family members wore a face veil at the court, which she normally doesn't do, to conceal her identity because of the social stigma.

“He is wronged! He just went to take a steam bath, it’s the first time he went,” said Mohamed, the brother of one of the accused. “We all pray, we know God, how would one of us do this?” he asks. “I’ll be in court when my brother is pronounced innocent.”

Meanwhile, observers see the targeting of the gay community as part of a wider crackdown that has seen an ever-increasing invasion of the private lives of Egyptians.

“What we’re seeing is a new kind of atmosphere and a new kind of moral policing where the police are really concerned with invading private spaces [and] figuring out what’s happening in private homes,” says Long. “I think it’s a symbolic message and it’s a very practical one for the regime as well: that we’re watching you.”