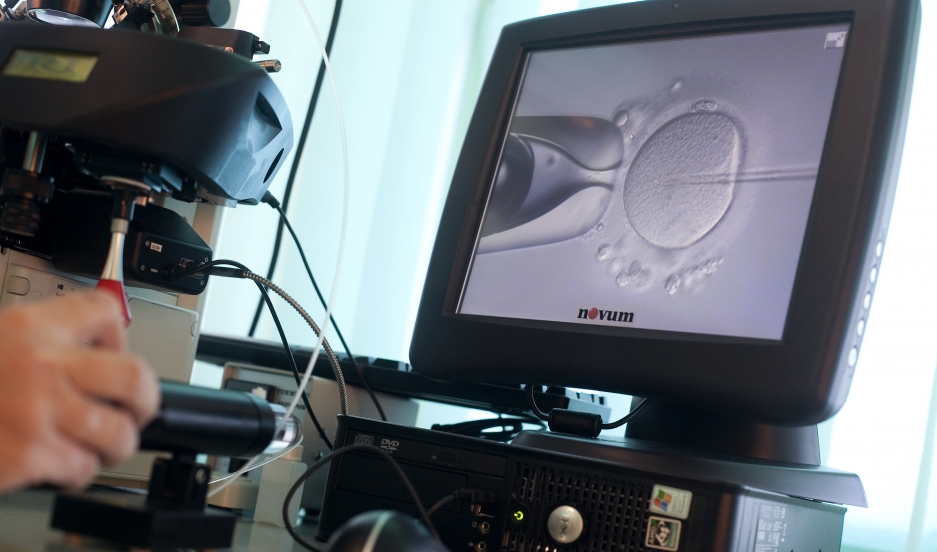 Romantic chemistry can be hard to quantify, but when sperm and egg meet, sparks do fly — in the form of billions and billions of zinc atoms, that is.

Every cell in nature that we know of contains zinc, but a mammalian egg cell accumulates an unprecedented amount of the element — 20 billion atoms — during the 12 hours before ovulation. 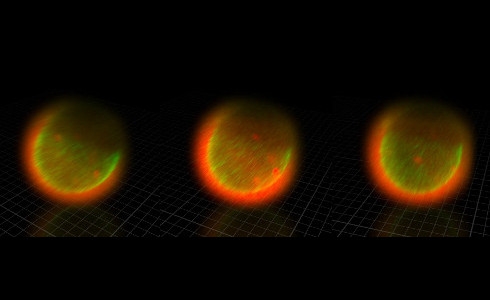 Using fluorescent labels for zinc, researchers at Northwestern University discovered thousands of zinc-rich packages in a mouse egg cell. These are released in discrete hotspots (the brighter red spots) upon fertilization, contributing to a phenomenon known as a “zinc spark.” This series of images is part of a time course visualized in three dimensions.

“Most cells couldn’t take up such a large amount of zinc. They would die,” says Teresa Woodruff, the director of the Women’s Health Institute at Northwestern’s Feinberg School of Medicine.

When a sperm meets an egg, however, the egg releases much of that zinc in a series of bursts. Scientists first discovered these bursts — dubbed “zinc sparks” — in 2012, but they didn’t have a clear picture of exactly how and why they happened. To get a closer look, Woodruff and other researchers from a multidisciplinary team at Northwestern University developed an imaging tool called a molecular probe to visualize and measure zinc sparks in mouse eggs that had just been fertilized.

They reported their findings last month in the journal Nature Chemistry.

The probe works by binding to “pools” of available zinc within an egg cell and staining them fluorescent green, according to Thomas O’Halloran, director of Northwestern’s Chemistry of Life Processes Institute and another author on the study. “What we found is that these pools were highly concentrated right near the cell surface,” he says.

Specifically, the researchers discovered approximately 8,000 compartments, or vesicles, in each egg, packed with about a million zinc atoms apiece. Once a sperm entered an egg, the team measured over the course of about an hour and a half an average of three to five sparks — each one releasing three to five billion zinc atoms in discrete “hotspots” (watch the video above). 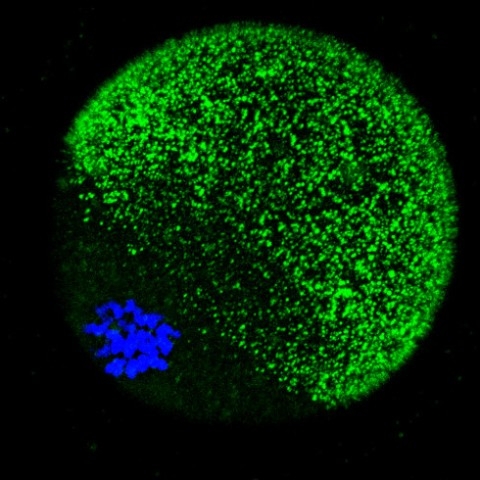 The fluorescing green depicts how the egg stores zinc in thousands of tiny packages. The blue represents the egg’s DNA.

So why does an egg amass so much zinc in the first place, only to release such a vast portion upon fertilization? While other cells typically mature without pause, an egg cell needs to pump the brakes until it’s fertilized — and the zinc likely signals the egg to stop growing.

“We think there’s a threshold level of zinc that has to be built up in the [egg] cell to cause this unusual arrest that other cells don’t go through,” O’Halloran says. Once an egg reaches that threshold, it’s ready for a sperm.

Woodruff and O’Halloran also say that the zinc could play other roles in the egg, and they hope that these findings will spur further research into the physiology of the egg-to-embryo transition. “We have so little understanding of how that transition occurs,” Woodruff says. “This window into its biology may capture people’s attention to focus on the kind of science that can be done at this really critical stage of development.”

This story was first published as a blog post from Science Friday with Ira Flatow.