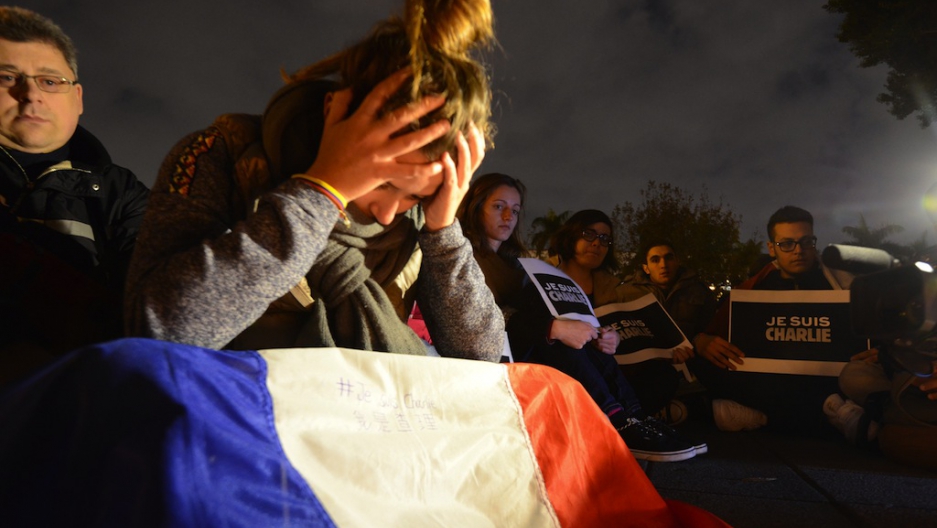 French nationals attend a vigil in solidarity with the victims of the shooting in Paris in front of the Chiang Kai-shek Memorial Hall in Taipei, Taiwan on Jan. 9, 2015. Surviving employees of Charlie Hebdo, the French satirical newspaper that lost its top staff to gunmen in an attack this week, started work on a new issue on Friday in premises loaned by the newspaper Liberation.
Credit: Sam Yeh
Share

PARIS, France — After a national day of mourning, it was a morning of high tension in France as the manhunt for two of the suspected gunmen in Wednesday’s attack on satirical magazine Charlie Hebdo continued to escalate. Friday began with reports of gunfire exchanged between police and the suspects in a town northeast of Paris, another stolen car, and hostages taken in two separate incidents.

French Interior Minister Bernard Cazeneuve confirmed that a police operation is ongoing about six miles northeast of Paris' Charles de Gaulle airport. According to news reports from the scene, a hostage situation is underway in a small, family-run printing business in the commune of Dammartin-en-Goële. Witnesses there said it felt like a war zone.

Police forces gather together above the 'peripherique' (circular road) of Porte de Vincennes, eastern Paris after at least one person was injured when a gunman opened fire at a kosher grocery store and took at least five people hostage, sources told AFP. The attacker was suspected of being the same gunman who killed a policewoman in a shooting in Montrouge in southern Paris the day before, on Jan. 8. 2014.

Meanwhile, in what police are calling a related attack, another gunman has reportedly taken at least five hostages at a kosher grocery store east of Paris. The man is already suspected of gunning down a policewoman on Thursday.

The chaos of the morning stands in sharp contrast to the quiet vigils that took place just hours before. At 8 p.m. on Thursday, declared a national day of mourning by President François Hollande, the lights of the Eiffel Tower went dark. Earlier in the day, crowds gathered at Notre Dame and other public spaces to observe a minute of silence — joined by individuals in classrooms, newsrooms, offices, government buildings and local businesses. Flags across Paris hung at half-mast as grey skies cleared to blue in the afternoon.

The smell of wax and the soft glow of candles filled the air for a second night at the Place de la République in Paris on Thursday as mourners gathered again to show support for the victims of Wednesday’s attack. Demonstrators clung to the bronze lion at the base of the square’s iconic statue while others climbed into the arms of the three female figures representing liberty, equality and fraternity. There they held up signs that have become ubiquitous across the city reading “Je suis Charlie” — "I am Charlie."

Chants of “Charlie, you’re not dead,” “We are not scared,” and “We are all Charlie” reflected broader sentiments expressed across the nation in the tense, stunned hours since gunmen killed two police officers and 10 journalists at the Paris office. The country remains on the highest terror alert.

The French have gathered en masse and with passion behind the controversial Charlie Hebdo newspaper, which considered everyone and everything fair game for satire. #JeSuisCharlie messages have flooded the internet, signs hang in shop windows, and French media outlets proclaimed solidarity in their pages and on their websites on Thursday. The stark black cover of daily newspaper Liberation proclaimed, “We are all Charlie.”

Charlie Hebdo has announced it will print one million copies of its next issue, scheduled for publication next Wednesday. The publication’s website now proclaims it “the journal of survivors.”

"The only response [to the attack] is that of mobilization — the cry that is the universal cry of France, the cry for freedom,” Prime Minister Manuel Valls said during an interview on French radio Thursday morning.

The dominant sentiment at the vigils and rallies over the past two days has been for French unity. The case has also kindled a variety of causes, predominantly freedom of expression and freedom of the press — but also those for and against religious and ethnic tolerance in France.

Questions of religion, immigration and integration have become increasingly charged in recent years and months in the country, reflected in the rise of the far-right National Front, and made all the more potent in the midst of economic crisis and worries about unemployment. The controversial new novel by Michel Houellebecq, “Submission,” reflects the panicked perspective among many French. The book tells the story of a convert to Islam who becomes president and rules France according to Sharia law.

France is not alone in its anti-Islam sentiment. Last weekend, supporters of Pegida, or Patriotic Europeans against the Islamization of the West, held rallies across Germany to express their dismay at immigration and the Muslim presence in Europe.

Just as rallying cries in support of Charlie Hebdo and freedom of expression mingled with moments of silence at demonstrations across the nation, so did the themes of division and unity. On Thursday the popular #JeSuisCharlie hashtag was joined on Twitter by #JeSuisAhmed — a statement in support of Muslim police officer Ahmed Merabet, killed in the Wednesday attack along with officer Franck Brinsolaro.

The feelings of precariousness that accompany any terror attack were made even more raw Thursday morning by the shooting of a police officer in a southern suburb of Paris and reports of attacks at or near mosques in France. It was unclear whether the events were related to Wednesday’s attack.

Alongside solidarity comes concern that the brutal shooting will only intensify anti-Islam sentiment and growing support for extreme right wing groups such as the National Front.

“We must not be scared of words,” National Front leader Marine Le Pen said in a statement earlier Thursday. “This is a terrorist attack committed in the name of radical Islamism. Denial and hypocrisy are no longer an option.”

At Wednesday night’s rally at Place de la République, symbolic offerings of pens formed piles on the ground and signs of support appeared in various languages. One woman knelt before a scattering of candles and asked a passerby for help writing in a language she didn’t know. “I am Charlie,” he wrote in Arabic. Above his words the woman added the same in French, “Je suis Charlie.”